Drink Up: Monarch & the Milkweed

On a recent night at Monarch & the Milkweed, there was a When Harry Met Sally moment. It happened when bartender Eddie DiDonato set my drink on the marble bar in front of me. The foamy cocktail towered over the top of the glass at an artful angle, a straw balanced on top like a seesaw.

“So what do I have to order to get one of those?” a man at a nearby bar stool asked. “It looks amazing.”

No one has to fake an orgasm, a la Meg Ryan in the aforementioned Hollywood hit, to get what I got. But it does take a whole lot of shakin'.

The $16 drink is called a Tonka Puff, and it takes about that number of minutes to mix the frothy, gin-based cocktail. Roughly 10 of those minutes are spent in a machine that does the shaking for DiDonato.

The electric shaker in the corner of the bar, equipped with neon numbers that count down the mixing time, resembles a mini-version of a fair ride you’d avoid: strap in sideways and get all shook up.   Used to make a Tonka Puff, Monarch’s version of a Ramos gin fizz, the machine builds a froth of egg whites and cream and blends it with Barr Hill gin, citrus, orange flower water, seltzer and tonka, the bean of a flowering tree.

“How do you drink this thing?” I asked DiDonato. (Or was I gonna eat it?)

Topped with more than an inch of froth — leaning but steady — I didn’t want to bust its beauty or miss a drop.

“Usually we have a straw with a spoon on the end,” DiDonato answered. “Like a slushie.” He gave me a spoon.

“Or you could go for the mustache,” suggested Josh Elwell. He was my neighbor at the bar, the person who wondered how he could get his hands on a Tonka Puff.

I plunged the straw into the drink and took a big slug: the cocktail hit me in a luscious wave of fizzy foam and dead-on booze. Next I had a spoonful of pure froth and that’s how the drink went down — alternating sips and spoonfuls of my spiked slushie, spiced with freshly grated tonka. 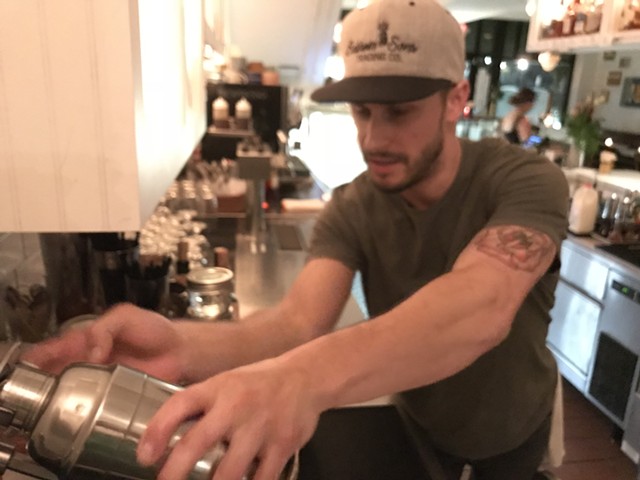 “The reason behind the long shake is to get that froth,” explained DiDonato, who last summer won the most imaginative bartender in the Northeast competition in Boston. He joined Monarch as the bar manager in February after working at Leunig’s Bistro & Cafe and Waterworks Food + Drink. The electric blender, called a bubble tea shaker, arrived the next month and “adds a bit of intrigue” to the bar, he said.
DiDonato had seen one in action in New Orleans, where he said it replaced the bygone practice of “shaker boys” — a lineup of barroom employees who took turns shaking a Ramos gin fizz and passing it down the line.

His Burlington version is a nod to that cocktail and to a Monarch pastry, flavored with tonka and also called the tonka puff.  The drink, he rightly noted, “is textured, frothy and indulgent.”
Prev
Next