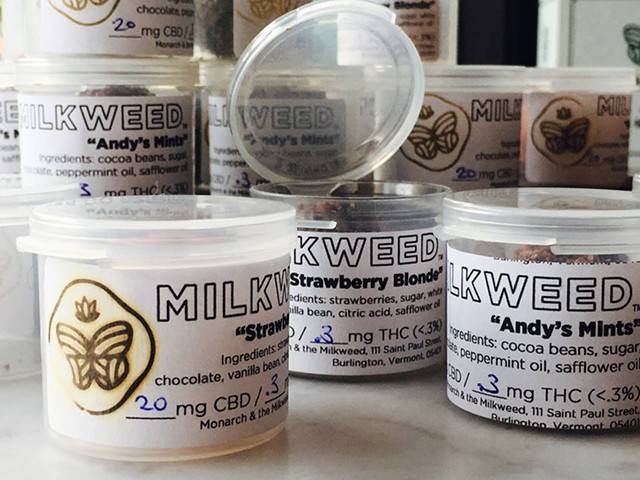 There's been quite a bit of talk lately about cannabidiol — better known as CBD — a non-psychoactive cannabinoid chemical prevalent in all cannabis varieties, from hemp to marijuana.

While CBD has stirred no small amount of controversy (much as growing hemp for industrial use did in the past), studies have shown that the chemical may be effective in treating everything from pain and inflammation to anxiety, stress, epilepsy, auto-immune disorders and even cancer. Yes, cancer.

Now, Burlington's Monarch & the Milkweed is selling sweets laced with the stuff. Last night, the popular restaurant and pastry stop announced via Facebook that patrons (ages 18 and over, kids) would be able to purchase "Milkweed" branded truffles containing 20 milligrams of CBD starting at noon today.

While the move may appear out-of-the-blue, Monarch chef-owner Andrew LeStourgeon told Seven Days it's been part of the plan all along.

Prior to opening his St. Paul Street restaurant, LeStourgeon moonlighted for nearly three years quietly making sweets at a local dispensary while also working as pastry chef at Hen of the Wood. When he and his partner, Burlington restaurant financier Rob Downey, developed the plans for Monarch, they knew they wanted to include a line of cannabinoid sweets in their oeuvre. "

We believe that cannabis has a very legal and healthy place in the world," LeStourgeon said, "and we’re [pleased] to be part of the process to get it there. It was always our intention to make these [products] available. We’ve been gearing up to this for a while."

But tasty CBD treats take time to develop. Finding a good source for CBD oil concentrated at levels that facilitate use in recipes was one challenge (LeStourgeon said he's partnered with a local CBD purveyor but declined to name names). Pinpointing dosage to exactly 20 milligrams per truffle was another. And, of course, the candies had to meet the chef's exacting standards for flavor and tactile qualities.  Team Monarch has also been busy 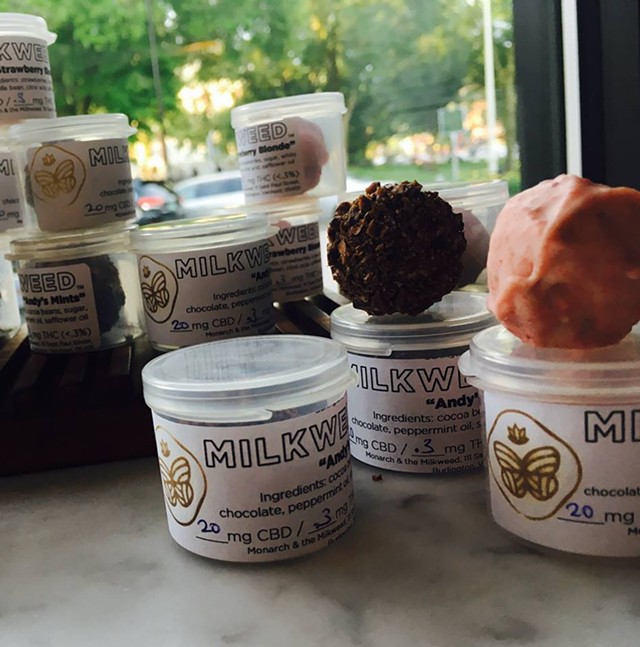 But wait, I thought marijuana edibles were illegal in Vermont outside of medical dispensaries?

That's true. But CBD isn't a marijuana product. It's harvested from hemp, which by law contains less than 0.3 percent tetrahydrocannabinol (THC), which gives weed its mood-altering qualities.  Hemp is legal to grow in Vermont. And CBD, which doesn't get you high, is perfectly legal for public use, sans prescription. You can buy it in oil form at Healthy Living Market & Café and at other local vendors.

As a cannabinoid compound, CBD bonds with receptors in your nervous system and throughout your body (together these neurotransmitters make up your endocannabinoid system), which help regulate everything from mood to sex drive to immune function, pain responses and bone growth. Study of the endocannabinoid system and its role in the body is still an emerging science, but many CBD users swear the chemical soothes everything from migraines to nausea. However, lacking significant clinical trials, the federal Food and Drug Administration has barred vendors of cannabinoid products from  making claims regarding their products' medical efficacy. For his part, LeStourgeon was reluctant to play the role of clinician: "

We’re not pretending to be a doctor’s office," he said when asked what effect eating one of the truffles might produce in an average customer. "It’s like if I sold you a cocktail and you asked, What is this going to do to me? We are not suggesting behaviors or feelings or effects for this."

Some users report that CBD produces a mellowing effect in the body — they feel noticeably calmer and more relaxed after taking it. Others say taking the compound simply eases pain or relieves nausea.

For now, Milkweed sweets are available only at the restaurant. But LeStourgeon said that if interest presents itself, he's "open to" selling them elsewhere. And, if and when marijuana is legalized, he's more than willing to consider whisking up THC-laden treats, too. But until that happens, he said, "W