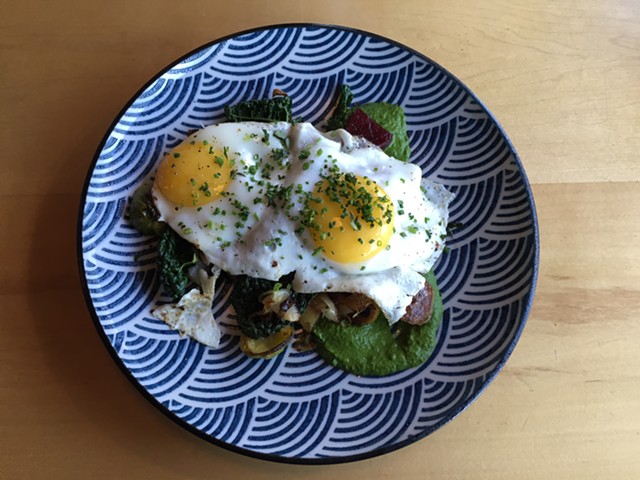 Sometimes you've got to pick a restaurant by its name, and on those occasions it's hard to look past Misery Loves Co. Saturday at noon, with no food in the house, was one of those times. I headed to Winooski.

Misery lived up to its name when I walked in the door and Excitable Boy by Warren Zevon was playing — banging home my choice, literally, with a couple of piano chords.

Things looked up from there, starting with the "boozy coffee" I noticed on the menu. I ordered mine with a shot of house-made Irish cream.  It tasted like a warm coffee milkshake, with a bonus: I got lit.

By now Zevon was winding up "Accidentally Like a Martyr" and my eggs with vegetable hash were taking shape in the kitchen. The food coincided with a musical shift to rhythm and blues, set off by a bass line that's as distinctive as any in pop music. Next thing I knew ... "It was the third of September."

The eggs, sunny-side up, were set on top of fall vegetables including turnips, chard, beets, carrots and Brussels sprouts.  Some of this  was grown at In the Weeds, MLC's farm in North Hero. The meal rested on a spread of salsa verde — the color of spring peeking through my muted roots.

I took a bite, the Temptations sang.

If it's been a while since you ate eggs and listened to "Papa Was a Rolling Stone" — "Papa was a rolling stone / Wherever he laid his hat was his home / And when he died / All he left us was alone" — I recommend it.