Burlington Progressives held on to their six council seats on Town Meeting Day, cementing the party’s influential voting bloc for another year.

The Progs notched wins in Wards 1 and 8 despite hard-fought campaigns by Democratic opponents who sought to frame the election as a referendum on post-George Floyd cuts to police.

“This result is a strong show of support for the issues we have been fighting for over the past two years,” Vermont Progressive Party director Josh Wronski said in a statement. “We are eager to get to work moving the City forward on issues like housing affordability, renters’ rights, climate change, transforming public safety, and meeting the basic needs of all our community members. We hope the Administration will join us as a willing partner.”

The wins maintain the caucus’ plurality on the 12-person council, a strength the councilors have wielded to pass a slew of left-leaning policies, including measures to ban no-cause evictions and reinstate ranked-choice voting. While Progs can’t pass resolutions without a seventh vote, they can band together to stop proposals they oppose all on their own.

That unique power was perhaps most evident in January when all six Progs voted against Democratic Mayor Miro Weinberger’s pick for police chief, Jon Murad. The tie vote sunk Murad’s nomination — but Weinberger later announced that Murad would stay on as acting chief indefinitely.

Public safety was top of mind for many voters this election, particularly in Ward 1. Democrats, including Gutman, said the Prog-led vote in June 2020 to reduce the police force has made the Queen City less safe. Hightower was a lead sponsor of the resolution — but she was also one of two Progs who reversed course last fall and authorized hiring more cops. 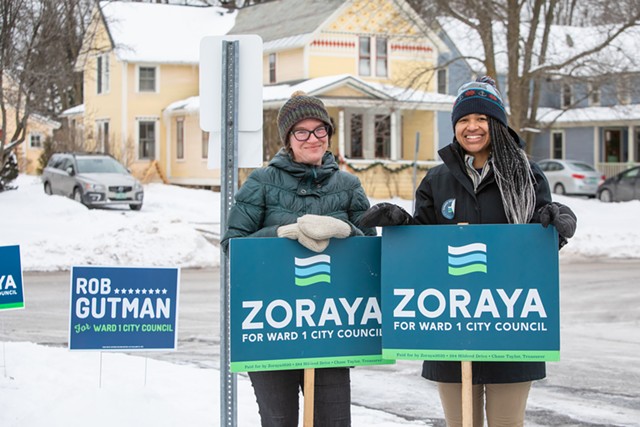 Hightower has billed herself as a “compromiser” in policy debates, and reiterated her commitment to working across the aisle in an interview with Town Meeting TV shortly after results came in.

“Councilors have tried to be much more collaborative, even when there's outside voices that are less collaborative,” she said. “I think I play a really important role in making that conversation continue and that tone on the way forward.”

Ward 1 voter Carol Livingston said politicians are criticized for collaborating with other political parties, but she appreciates that quality in Hightower.

“[Compromising means] you’re hearing all the different aspects,” said Livingston, who volunteered on Hightower’s campaign. “She clearly has really strong views herself … but she also recognizes that she’s representing all points of view. That’s really important to do.”

Livingston was volunteering for House on Tuesday, and held a sign outside the Ward 8 polling place at Fletcher Free Library. Despite the chilling wind, the electioneers were in good spirits — perhaps helped by state Rep. Brian Cina (P/D-Burlington), who pulled up in a white van to DJ a set of music. A huddle of King supporters cheered when another volunteer dropped off coffee from Dunkin’.

A small group gathered at the library just before polls closed at 7 p.m. As soon as the results were taped to the door, outgoing City Council President Max Tracy (P-Ward 2) exclaimed, “Ali won!” House and outgoing Ward 8 Councilor Jane Stromberg, a Progressive, hugged and screamed with joy.

The mood was somewhat subdued at Halvorson’s Upstreet Cafe on Church Street, where the Dems gathered for a post-election watch party. Despite his party’s losses in key races, Mayor Weinberger said Dems “had a good night,” particularly in Ward 5, where first-time candidate Ben Traverse won a three-way race with 1,208 votes. Prog-endorsed independent candidate FaRied Munarsyah notched 259 votes, and independent Lenora Travis got 72. Traverse will fill the seat being vacated by longtime Dem Chip Mason.

"Burlington voters sent a clear message this Town Meeting Day; they believe in the vision of a productive, positive, and collaborative City Council,” Traverse said in a written statement after the results were announced. “Burlington is ready to move beyond the political rhetoric and divisiveness standing in the way of progress." 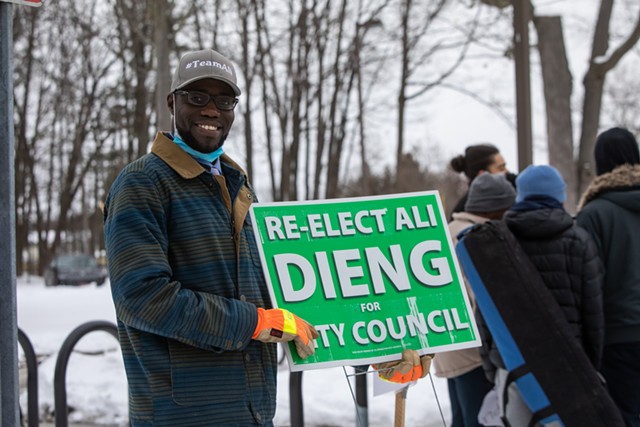 Stith said he plans to ask for a recount. Regardless of the outcome, he said he’s proud of the campaign he built from the ground up.

“I came into this with no political experience or connection,” he said. “So for me, going from not being known to where we are now, it's been a phenomenal experience. It really shows that Ward 7 voters care and are interested in a change.”

Ward 7 resident Judie Blanchard voted for Stith for that exact reason. She said she’s disenchanted with the current council and hoped Stith could “bring some new ideas” to the table. Fellow voter Erika LaTeer, however, said she voted for Dieng because he’s approachable and doesn’t always agree with Weinberger.

“He’s got a different voice,” LaTeer said. “He brings up those perspectives that I don't think are heard.”

Dieng said voters appreciate that he’s a true independent. He was equally sanguine about his razor-thin win, saying that the outcome shows that “Ali Dieng is still loved in the New North End.”