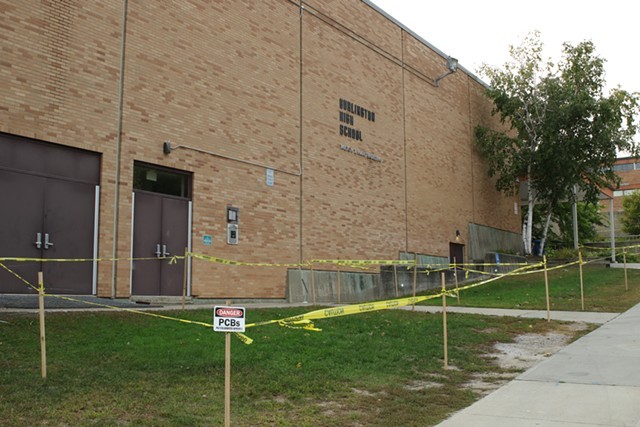 The Burlington School District said on Tuesday that a new high school and technical center could come with a price tag of somewhere between $161 million and $207 million.

That estimate doesn't include an additional $26 million to $29 million the district would need to demolish the current buildings on the Institute Road campus and safely remove contaminated soils and building materials.

The district released the estimate on the afternoon of Town Meeting Day, as Burlingtonians voted on a potential tax hike and a capital bond for new city spending. Also on the ballot was the $98.2 million school budget, which represented a 13.1 percent increase in per-pupil spending over last year. But the district said it would likely amount to a reduction for taxpayers because of a surplus in the state education fund.

The district is expected to discuss the new estimate at Wednesday's school board meeting. The price range is based on general per-square-foot construction cost data, as well as architectural, site, engineering and consultant fees, superintendent Tom Flanagan said in a letter to families and staff.

The district intends to put a bond to voters for the new high school in November.

But, Flanagan said in his letter, "we will be working hard to ensure Burlingtonians do not have to bear the full cost of this project."

The district has already earmarked more than $11 million — $10 million in federal Elementary and Secondary School Emergency Relief funds and $1.5 million in surplus money — for the project. Flanagan said. School officials will be looking for additional state and federal support, as well as grants and donations. Regardless, the bond will be a big ask for Burlington voters, many of whom are paying higher taxes after a property reassessment last year.

Asked about the estimate after the polls closed on Tuesday, Mayor Miro Weinberger acknowledged that "they're eye-opening numbers.


"But I think when you kind of sort through that full analysis, I'm hopeful they are on track to come forward with a proposal that will be a huge step forward for the children of this community and represent ... a world-class high school, finally, for this community," he said, "and will be something we can responsibly afford."

As Burlington Finalizes New Property Values, Some Residents Still Aren’t Satisfied
By Courtney Lamdin
City
The Institute Road campus has been closed since the fall of 2020, when the district discovered high levels of polychlorinated biphenyls (PCBs) inside several classrooms. Since March 2021, students have been attending school at the former Macy's building downtown.
In May of that year, the school board voted to terminate a $70 million renovation of the New North End campus after environmental consultants found that PCB contamination was even more widespread then previously thought — in the buildings' floors, window caulking, walls, ceiling, soil and air. Burlington voters had approved a bond to fund that project in November 2018.

Burlington School Board Votes to Abandon PCB-Contaminated High School
By Alison Novak
Off Message
Last November, the board voted to build a new high school and tech center on the old campus. The new building, which the district hopes to complete by the summer of 2025, is slated to occupy the area east of the existing high school, between the old buildings and North Avenue. District officials had considered building the school in downtown Burlington. But they ultimately decided building on the existing campus was the "most fiscally responsible option," Flanagan said at the time.

According to a timeline released Tuesday, the team is scheduled complete its final conceptual design options and project cost estimates for the new high school on March 28, and present them to the school board and in a public forum in the weeks following.

If all goes to plan, the school board would choose a conceptual design for the building on April 21. The board would likely approve a final design and cost estimate in the summer. Then voters would consider a bond in November and construction would begin in summer 2023, with the goal of completing the high school in two years.

In his letter, Flanagan invited community members to attend Wednesday's school board meeting virtually or in person to learn more about the high school project. Updates are also available at the BHS/BTC 2025 webpage.
Prev
Next