Burlington Seeks a Makeover for Main Street With TIF Bond 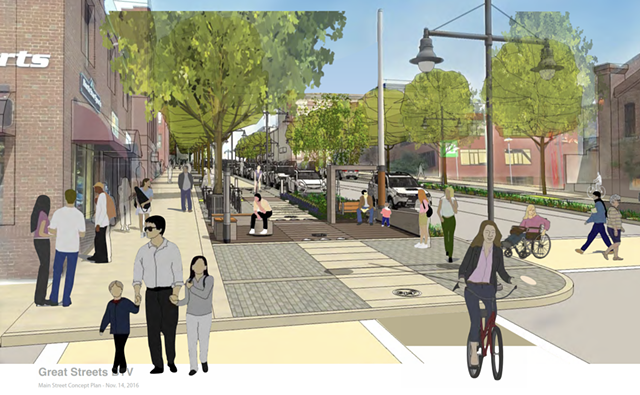 Imagine Burlington’s Main Street with wide sidewalks, protected bike lanes and a luxurious tree canopy. Art installations, rain gardens and cafe-style seating would line the streets, and wooden swings would give visitors a place to watch sunsets over the lake.

Such an urban paradise could be possible, city officials say, if voters pass a $25.9 million bond on Town Meeting Day. If approved by a majority, the spending plan would revamp a six-block stretch of Main Street — from South Union to Battery Street — in the city’s downtown tax-increment financing district. The bond would also pay to either relocate or rehab the city’s 160-year-old “ravine sewer” line at the corner of Main and South Winooski Avenue.

Unlike other money items on the ballot this year — a 4-cent tax rate increase and a $23.8 million capital bond — the TIF bond wouldn't raise residents’ taxes. TIF allows municipalities to borrow money with the expectation that the infrastructure improvements created in the district will generate revenue to repay the debt.

With a March 2023 deadline for Burlington to take out loans for TIF projects in this district, officials say the bond question is a once-in-a-lifetime chance to transform downtown — without raising taxes, to boot. But some opponents have suggested that the promise is too good to be true, and have argued that the conceptual design doesn’t wholly address safety concerns.

The Main Street project is the city’s second foray into its “Great Streets” program, which aims to make roadways friendlier for walkers and bikers. The first such makeover, on St. Paul Street in 2019, rebuilt sidewalks, buried utility lines and installed permeable pavers that filter stormwater runoff.

“Bump outs” were built into curbs to shorten the road-crossing distance for pedestrians, but they also made intersections harder to traverse. The city widened the crossings after several drivers collided with the curbs.

Burlington's St. Paul Street Makeover Confounds Drivers
By Courtney Lamdin
News
It’s likely Main Street would include many of the same design elements, and possibly more, given its generous, 99-foot public right-of-way — the widest in the city. To make room for the walk and bike facilities, the city would eliminate some parking along the corridor by switching from diagonal to parallel spots.

Addressing the sewer line isn’t part of the Great Streets plan, but city officials say it’s needed to spur redevelopment of the so-called “gateway block.” The space is currently home to a city-owned parking lot, but master plans envision the corner site as a grand entrance to downtown, with mixed use, multistory structures.

The sewer line runs through a long-buried ravine that was once used by railcars to haul goods from the Winooski River to Lake Champlain. In its current condition, the infrastructure can’t support a building aboveground. That issue prevented the Burlington School District from realistically considering the site for a new high school building.

Consultant Finds Problems With Downtown Site for New Burlington High School
By Alison Novak
Off Message
Passing the bond would pay for engineering studies to determine if the sewer line should be upgraded or relocated, costs that would also be covered by the bond.

“We have the choice to do things in a coordinated fashion, or wait for things to break in an unplanned fashion,” Burlington Public Works Director Chapin Spencer said. “The city is bringing forward a coordinated, proactive effort to restore infrastructure that is beyond end of life.”

If the TIF bond fails, Spencer said, the city would have to ask voters to approve a separate bond to fix the sewer line, which would be repaid by increasing rates on property owners’ water bills.

There could be similar consequences for the Great Streets program, according to Brian Pine, director of Burlington’s Community & Economic Development Office. The city could put the proposal on the November ballot, but Pine said that would be cutting it close to the March 2023 TIF debt deadline.

Otherwise, Pine said, the city would have to tackle the upgrades over time, without the TIF revenue to pay off the debt. “It would be a piecemeal approach that would take many, many years to accomplish,” he said. 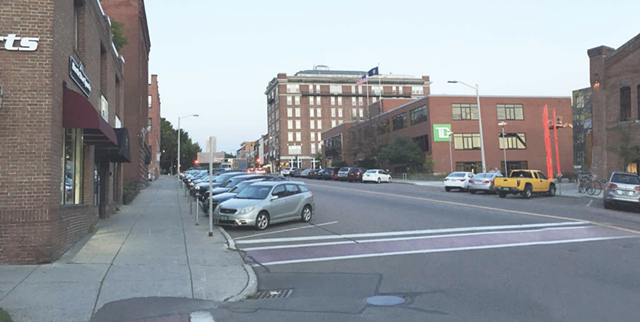 Some community activists aren’t buying the city’s pitch. Burlington residents Michael Long, Tony Redington and others have taken to Front Porch Forum in recent weeks to urge voters to say “no” to the bond over concerns with TIF financing and the project’s design.

Like other TIF critics, Long says it allows the city to pay down debt instead of sending that money to the state education fund. Long argues that these revenues should instead bolster city and school services that are strained by new development.

“From my perspective, it's a horrible public policy that creates a huge revenue stream the politicians like to have, but to the detriment of schools and city services,” Long said during a recent forum on Town Meeting TV. “We should support and fund worthy projects but not use TIF because it strips revenue away from those other things that we need.”

Long has also questioned the premise that TIF is free money. Others worry that taxpayers could be on the hook for repaying the bond if the anticipated development, and thereby additional revenues, don’t materialize.

But Pine says the city based its ability to repay the bond on a conservative 1 percent increase in property values in the district, when values have actually gone up by 6.5 percent in the last 10 years. Additionally, several development projects are already in the pipeline, including a large apartment complex on South Champlain Street and a mixed use building on South Winooski Avenue.

The city would be able to repay the TIF debt even without these projects, Pine said.

“We would not take a speculative approach to this and say, ‘If we build it, they will come,’” he said. “We only go in knowing that there's going to be sufficient increment to repay the bond. Otherwise, it's just not responsible.”

Redington, a vocal walk/bike advocate, has homed in on the project’s design instead of its financing plan. Several of the intersections along Main Street, all of which use traffic lights, are listed as high-crash locations by the Vermont Agency of Transportation. Redington says keeping these traffic signals does little to address pedestrian safety, and he has proposed the city use roundabouts instead.

“You can have all the protected bike lanes you want, but … the injuries are occurring at the intersections; that’s where the danger is,” Redington said. “[The city] just did some pretty pictures on Main Street without any hard look at anything.”

Spencer, the public works director, refuted Redington’s assertion, saying the bump outs and bike lanes would naturally slow vehicle traffic. He noted that the public would have numerous chances to weigh in on the final design before it's presented to the city council for a vote this spring.

“It really is a model design, and it will improve the safety in Burlington along this key corridor,” he said. “The fact that we are able to do this scope of a project without impacting property taxes here is something that voters will support.”
Prev
Next