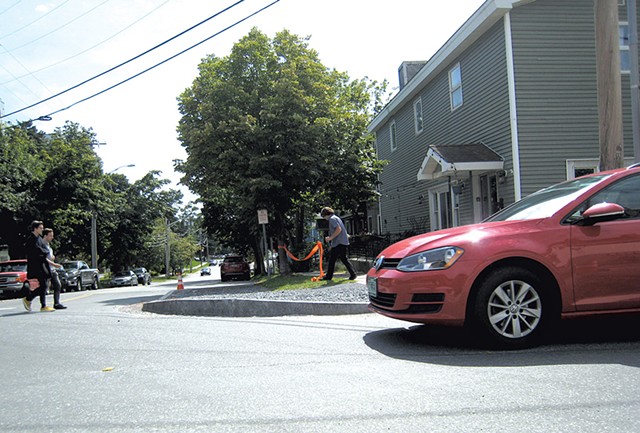 Elaine Russell was trying to avoid Pine Street. She and her husband were driving from Burlington home to Vergennes, and road construction was the last thing they wanted to wrangle on Labor Day Weekend.

So she motored east on Maple Street past Pine to the four-way stop with St. Paul Street, with plans to turn right there. It was dark by 9 p.m., but Russell could see that the familiar intersection had changed. Brand-new granite curbs jutted into the roadway, narrowing the passage by several feet.

In an effort to avoid a large pickup turning west onto Maple from St. Paul, Russell kept hard to the right and heard her vehicle's rocker panel scrape along the new curb. The noise was so loud that patrons at the nearby St. Paul Street Gastrogrub jumped out of their seats.

The truck drove off, and Russell drove home with at least $1,000 in damage to her 2017 Nissan Sentra.

"It just totally upset me," Russell said. "I did not expect that at all."

St. Paul Street is the first example of Burlington's Great Streets Initiative, which aims to create friendlier roadways for walkers and cyclists by building wider sidewalks, tree belts and bike lanes. What Russell encountered is a streetscaping feature known as a "bump-out," which is intended to lessen the road-crossing distance for pedestrians.

As part of the initiative, the city wants to make 26 downtown blocks — all contained by Maple, Battery, Pearl and South Union — narrower, some dramatically so. Main Street could go from 71 feet wide at one spot to a slim 38. The redesign would also eliminate dozens of parking spots along the stretch.

Great Streets is a long-range plan with no real timeline, but the concept alone is controversial. Burlington has long struggled to balance the needs of people who use alternative transportation and those who drive and park on city streets. The project, with its bike lanes and traffic-calming designs, is an ambitious attempt to serve the former. But if St. Paul, a major transportation artery, is their introduction, drivers won't likely think these Great Streets are so great.

"I think it's bad. I just think it's a tough intersection," City Councilor Franklin Paulino (D-North District) said of St. Paul at Maple. "It's always going to be ... no matter what kind of city planning we end up doing."

The Burlington City Council first documented a desire for street design standards in a 1996 municipal plan. Fifteen years later, a 2011 transportation plan coined the term "Great Streets," which were codified in the 2013 planBTV Downtown and Waterfront Master Plan. In 2015, voters OK'd a $10 million tax-increment financing bond to improve St. Paul and Main streets. The city council approved the St. Paul project, which spans two blocks from Main to Maple, last August. Construction began the day after Labor Day 2018 with an expected completion date of May 24, 2019.

Nearly four months after that date, the project is still unfinished. Crews from S.D. Ireland hit snags when they unearthed contaminated soil and fuel tanks in the construction area last fall. Engineers also spent an inordinate amount of time coordinating with private utilities after discovering that many subterranean service lines needed to be replaced before they were paved over. The delays added $260,000 to the $4.9 million project, which is primarily paid for with TIF dollars and several special revenue funds, such as from parking meters.

Richard Vaughn, owner of Perky Planet Coffee at St. Paul and King streets, said he never would have opened in January if he'd known the project would drag on. The shop's mission is to hire workers with disabilities, but Vaughn says he's only making enough to pay four very part-time employees; most days, he's the one behind the counter.

Vaughn said the construction has cost Perky Planet $10,000 a month. In late July, he filed a claim against the city's insurance seeking $62,500 in relief. The city has not yet responded.

"This isn't who I am. This isn't what I want to do," Vaughn said of his formal complaint, adding, "The original timeline that I relied on when I built this place was fantasy."

The city now estimates that St. Paul will be open to traffic and business by the end of September. When it is, Mayor Miro Weinberger says the area will go from "a little-visited, peripheral part of our downtown" to "one of the nicest streets."

Indeed, all Great Streets include a variety of amenities. Illustrations show wider, wheelchair-accessible sidewalks; gardens that capture and filter storm water; terraces for art installations or covered bike parking; and decks with built-in seating. Promotional documents speak to the possibilities: "What if you could watch the sun set over the lake while sitting on a swing at Main and Pine?" one reads.

But something has to give to make room for all these perks, and on Main Street, it's parking. The Great Streets design cuts 43 of the 161 existing parking spots and transitions them from diagonal to parallel. Main Street's 99-foot public right-of-way — the widest in the city — lends itself to a dramatic Great Streets transformation, Weinberger said. Burlington is moving from an automobile-centric city to an environmentally conscious one, he said.

"You still get a lot of parking," Weinberger said, adding that Great Streets represents a "holistic understanding of how the public right-of-way should be used." 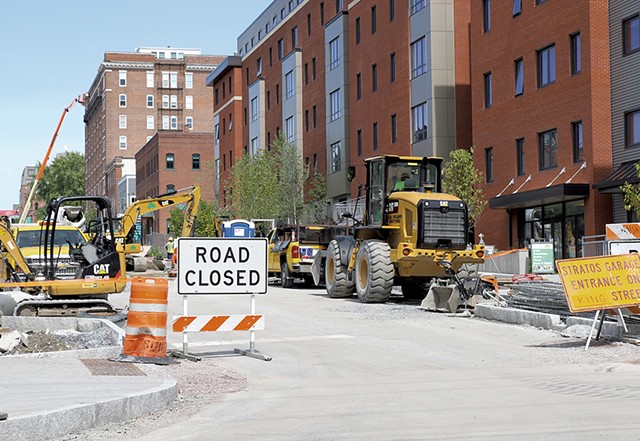 Burlington Public Works Director Chapin Spencer said the parking sacrifice will be worth it: Tree canopies will flourish, and businesses will get more frontage for outdoor seating — all elements "essential to a thriving downtown," he said.

Before Spencer took the public works gig in 2013, he founded and led Local Motion, a Burlington nonprofit that promotes biking and walking. The group's current executive director, Karen Yacos, said that cars should no longer be king of the streets. Wider sidewalks encourage people to mingle and shop, and narrower streets will force drivers to slow down.

"A street with just a narrow sidewalk and a bunch of car parking is not a vibrant place," Yacos said. She said the new thoroughfares would feel "like Church Street without shutting off the whole street."

Paulino, the city councilor, noted that biking isn't practical for everyone, and his constituents have expressed a desire for more car parking downtown. They've also complained about the St. Paul-Maple street curb design. So Paulino stood at the corner on September 2 for 20 minutes and watched vehicles negotiate the tighter turn.

"It was crazy," he said in summary.

Seven Days, too, did some unscientific analysis. Over the course of an hour on September 3, approximately 600 vehicles passed through the intersection during the afternoon rush. Only three drivers hit the curb, but the vast majority made extra-wide turns in an effort to avoid colliding with it or another driver.

After the new features were installed a few weeks ago, the staff at the Gastrogrub on St. Paul started a "curb kill count" and tallied a dozen hits in a single evening, bartender Rob LaClair recalled. The scuffed and blackened curb is evidence.

Similar stories have been told at nearby Handy's Lunch and on Front Porch Forum, where one woman lamented that she had to "back up halfway down Maple" to make room for a turning school bus. Green Mountain Transit is avoiding the junction altogether after concluding "from a geometry perspective, it was too tight," interim general manager Jon Moore said.

"Green Mountain Transit does support pedestrian infrastructure improvements," he added. "There are some merits there. We just want to be sure we can be compatible."

Once St. Paul reopens, GMT's green line will resume traveling north and south on that street, no turns necessary; Weinberger expects that will be true for most drivers. But Paulino said the road design won't completely dissuade larger vehicles from taking turns.

"We'll never be able to tell people which way to go to work," he said. "People drive the shortest route."

City Councilor Brian Pine (P-Ward 3) said he tested the intersection in the smaller of his family's two vehicles. He made it without striking the bump-out, but in doing so, crossed into the opposing lane of traffic. Pine said he's reserving judgment until the project is fully complete.

"If it doesn't work, we have to be ready to do something about it," he said. "I hope we don't, because that will be very costly."

City engineer Norm Baldwin said drivers are coming to conclusions before the intersection is finished. Traffic will flow differently after upper St. Paul is open: A fresh coat of pavement will reduce the curb's height, and crews will paint stop bars in the proper places, he said.

Still, the city is taking citizen concerns to heart. Baldwin said planners are leaving the curb unfinished while they monitor traffic over the next few weeks. If the city concludes the bump-out is too intrusive, workers could fix it before finishing touches are made, Baldwin said.

In the meantime, people are certainly taking the turn more carefully than ever before. Does that mean the city's plan to slow traffic is working?

Spencer, the DPW director, acknowledged drivers' frustration but said the Great Streets success story shouldn't be marred by the curb conundrum. Despite the St. Paul project's delays, he said, the initiative's coordinated approach — to bury utility lines, improve water infrastructure and repave streets all at once — saves more time and money than if the city were to tackle these issues separately.

Future Great Streets projects will likely be just as complex as St. Paul, but in Spencer's view, the temporary disruption is well worth it to reinvest in the city's aging infrastructure.

"At some point, we can't just sit around and put a Band Aid and duct tape on stuff," he said.

"Are we going to be perfect on our first install? No," he added. "But this street is going to be remarkably great for the city for generations to come."

As for Russell, the Vergennes driver, the hefty repair bill from her curb encounter was enough to make her reconsider ever driving down St. Paul again.

"I took that one off my list," she said with a laugh. "I'll fight with Pine Street from now on."