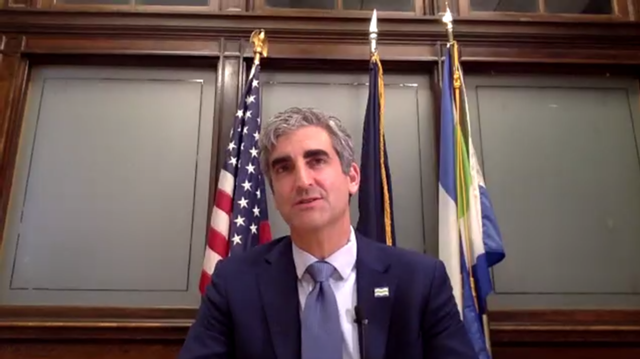 Burlington Mayor Miro Weinberger began his fourth term on Monday night by pledging to fight for racial justice, an issue he called the city's “most pressing emergency and our hardest challenge."

In a virtual state of the city speech that was at times somber and contrite, Weinberger said that Burlington must shift its focus to eradicating systemic racism now that an end to the coronavirus pandemic in sight.

“My administration has attempted to work on racial justice in the past,” Weinberger said. “However, it is clear to me now that our efforts before this past year were inadequate.”

Some of these initiatives included forming a Racial Equity, Inclusion and Belonging Office; declaring racism a public health emergency; launching a task force on reparations; and supporting COVID-19 vaccine clinics for Black, Indigenous and other people of color.

But much of Weinberger's last term was marked by turmoil and heated debate, including a monthlong protest in a city park and continual disagreements with Progressive councilors over police staffing levels and increased police oversight.

Just last month, Weinberger caught flak for appointing a white department head to oversee a vital police assessment instead of  Tyeastia Green, the director of the Racial, Equity, Inclusion and Belonging Office and the city’s only Black department head. The study is now under way, with Green at the helm.

On Monday night, Weinberger apologized directly to Green and to the larger Black community. He pledged to become “an anti-racist leader who identifies racism and works to dismantle it.”

Weinberger also announced several initiatives to combat systemic racism. He said his fiscal year 2022 budget, which the city council will vote on in June, will seek to “substantially increase” the size of Green's department and make permanent the city's Trusted Community Voices program, which bolsters city communications with immigrants and refugees. All city employees will undergo anti-racism training developed by Green and her team, Weinberger said.

The city will also host a second housing summit this summer focused on helping Black residents achieve home ownership, which Weinberger called “one of the most powerful indicators of belonging in a community.”

“This is no accident,” Weinberger said, noting the country historically used discriminatory lending and zoning practices to create “exclusionary and racially disparate land use patterns … including in some respects here in Burlington.”

Weinberger also committed to reforming public safety in Burlington. He plans to meet this week with the Howard Center, the state’s largest mental health service provider, about creating a first response team similar to one pioneered in Eugene, Ore. The so-called CAHOOTS model — Crisis Assistance Helping Out On the Streets — dispatches medics and crisis workers to calls related to substance abuse, suicidal subjects and other similar situations instead of armed police.

Other priorities include finding consensus with councilors on police discipline and hosting the city’s first-ever celebration of Juneteenth on June 19, the day in 1865 when enslaved Black people learned they were free.

Weinberger closed his speech on a personal note, saying that he’s inspired to fight for racial justice so that his daughters and other BIPOC children “know that they fully belong here.

“This work will be challenging and it will be long. I am sure that I will continue to make mistakes along the way and that I always will need to strive to do better,” he continued. “Tonight, I commit and I recommit to this work, and I ask all of you to join me.”

In the days before the speech, a group of activists organizing under the banner "Gotta Go Miro" started a petition demanding that Weinberger step down because of recent missteps, including the debacle involving Green. More than 700 people had signed as of Monday night.

After the speech, however, Gotta Go Miro organizer Llu Mulvaney-Stanak tweeted that Weinberger appeared to "take accountability" for harming the BIPOC community.

"I didn’t sense the defensiveness and hedging we have heard so often from you.
This makes me hopeful that you have reflected and listened more and are invested in that moving forward," Mulvaney-Stanak wrote, addressing the mayor. "Part of keeping #BTV on track for racial justice is all of us working together. Sometimes, that requires calls for bold action and respectful pressure. We will hold you to your word and promises."


Weinberger also saluted all 18 department heads for their hard work during the pandemic and gave special thanks to City Attorney Eileen Blackwood, who is leaving the city in June after nine years. Blackwood was one of Weinberger's first appointees in the months after he first won election in 2012.

Councilors unanimously chose their colleague Max Tracy (P-Ward 2) to continue as the body's president, a role he’s held for the last year. He also came within 129 votes of knocking out Weinberger in the mayor's race. Tracy said he was honored to serve at a time “where we may be on the precipice of a great social and cultural rebirth as a city.”

Councilors Ali Dieng (I-Ward 7), Karen Paul (D-Ward 6) and Brian Pine (P-Ward 3) were all named to the council’s finance committee, which will get the first crack at the mayor’s budget in the coming months.

Other committee assignments will be announced at a future meeting, Tracy said.

Watch the full speech below, courtesy of Town Meeting TV.