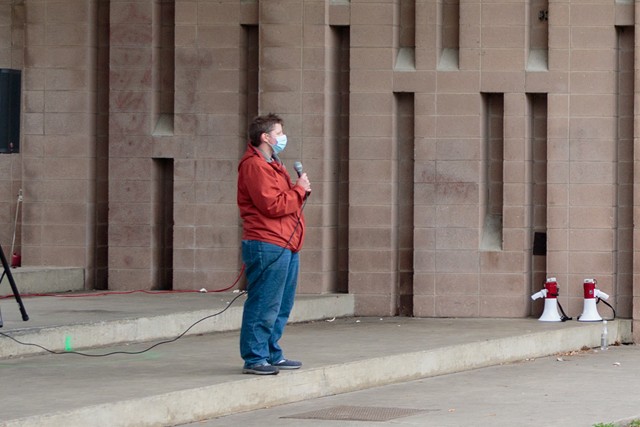 An activist investigating the April 2020 disappearance of a Barre man has been charged with criminal contempt for refusing to answer questions during a confidential hearing related to the case earlier this month.


Lee Morrigan, a Burlington activist who uses they/them pronouns, is scheduled to appear in Washington County Superior Court on Thursday morning. Prosecutors plan to ask that Morrigan serve a day or two in jail and pay a $500 fine, though a judge could impose a harsher penalty.

The charge stems from Morrigan's refusal to answer questions during a hearing that was part of an ongoing inquest — or secret investigatory proceeding — into Ralph "Rizz" Jean-Marie’s disappearance. Prosecutors are using the confidential court process to compel under-oath testimony from people they believe are withholding information that might help investigators. An unknown number of other people have also been subpoenaed.

Morrigan has said they know of surveillance footage taken at the motel where Jean-Marie was last seen that might shed light on his now year-old disappearance. Morrigan claims sources have said that the police have such a tape in their possession.

Publicly, the Barre City Police Department has refused to say whether it has security footage from the motel, despite activists' claims that it does.


Morrigan, who has been a leading critic of the investigation, told Seven Days this week that they do not trust the Barre City Police Department and will not reveal who told them about the footage over concerns that their sources could face repercussions. The activist would also not reveal their sources to Seven Days.

"At no point has anyone asked me if I've ever seen the video," Morrigan said. "The fact that they are solely focused on finding out who the source is, I find concerning."

Barre City police have faced intense scrutiny in recent months over Jean-Marie's disappearance. Family members and activists say investigators have given the case inadequate attention because Jean-Marie was poor and Black. They have issued two main demands: that the local police bring in the Federal Bureau of Investigation for a consultation and release security footage from the motel.

At a press conference last month, Barre City Police Chief Tim Bombardier brushed off questions from Morrigan about the security tape, refusing again to confirm whether it existed.

Unsatisfied, Morrigan eventually said, "I'm telling you, I know there is a video tape. Multiple people know for certain there's a video tape."

Questions Persist About Police Investigation Into Ralph Jean-Marie's Disappearance
By Colin Flanders
Crime
Seven Days ran a story a week later that raised questions about the thoroughness of the investigation, revealing that police never spoke to neighbors of the motel and failed to request security footage from at least one nearby business. Morrigan was quoted in that story saying the police "can't even do the fucking bare minimum."

The day the story was published, two Barre City detectives showed up at Morrigan's Burlington home and asked for the names of the people who knew about the alleged footage. Morrigan videotaped the encounter and refused to answer their questions. Morrigan suggested instead that the detectives pursue a more formal interview during which their attorney could be present.

Soon after, Morrigan received a subpoena to testify at the inquest hearing.

It is not uncommon for prosecutors to issue subpoenas in attempts to force people to reveal certain information connected to potential crimes. Those cases have often involved journalists, and there are laws on the book in some states, including Vermont, that protect reporters from being compelled to reveal information or sources.

Why Vermont Journalists Want a ‘Shield Law’
By Ken Picard
Media
Activists have far less protections, however, and Morrigan has offered no legal justification for refusing to answer questions, according to Washington County State's Attorney Rory Thibault.

Morrigan's attorney did not return a request for comment.

In an interview on Tuesday, Thibault said he had two main reasons why he wanted to know who told Morrigan about the alleged video. First, he wanted to know whether the video these people allegedly saw was "the same or something different from what law enforcement has been interested in."

More concerning, he said, was that the investigation into Jean-Marie's disappearance has been clouded at times by "often unsubstantiated rumors and innuendo."

"There are people who are deliberately seeking to inject false information or obscure the reality of the circumstances of the disappearance," Thibault said. "When individuals are out there claiming to have seen — first-hand — critical information in the case, investigators have an obvious interest in meeting with them."

As for charging Morrigan, Thibault said it was the principle of the matter.

"There's an expectation that when someone is subpoenaed that they will answer truthfully," he said. "That is how we uphold the law."

He went on to say that he was "perplexed" by Morrigan's position: "On one hand, being a champion and advocate for Mr. Jean-Marie, and yet, having the opportunity to meaningfully contribute to the investigation they've been a critic of, declining to do so in the face of legal peril."

"I would certainly hope that [Morrigan] and others in that position would prioritize getting to the truth of the matter," Thibault added.

Morrigan, meanwhile, says police have already spoken to their sources as part of the investigation. The activist recalled intimating as much at the hearing earlier this month, telling Thibault that knowing the identify of the people would not bring any new information.

That leads Morrigan to believe the charge is simply retaliation for criticizing the investigation.

"I, and the activist community, are being sent a message," Morrigan said.
Prev
Next