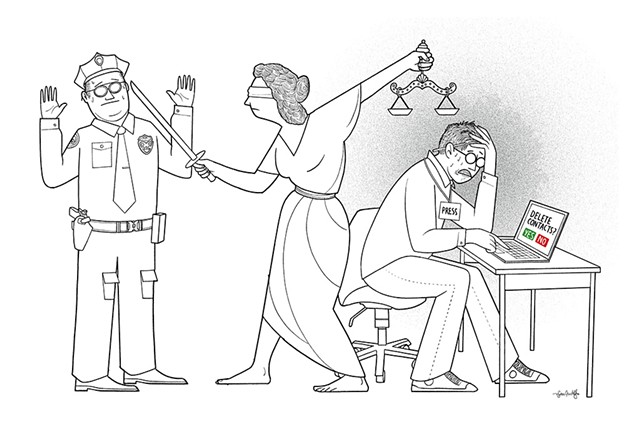 Vermont's shield law provides "nearly insurmountable" protection for journalists from investigators who seek to compel them to disclose information or sources, a judge wrote in the first legal interpretation of the new statute.

The order by Washington Superior Court Judge Howard VanBenthuysen was issued in February of 2018 but had remained sealed until Friday, when a Vermont Supreme Court ruling made it public.

The judge was considering whether the Washington County state's attorney and the attorney general could force WCAX to provide video of a police shooting in Montpelier for use in an inquest into potential criminal charges. The television station asked VanBenthuysen to quash the subpoena on the grounds that it violated the shield law.

The television station won, but VanBenthuysen kept the victory for press rights under wraps because it related to an inquest, which is a secret investigatory proceeding. WCAX appealed to the Supreme Court to have the order unsealed, arguing that it provided important insight into how courts were interpreting the new law.

Why Vermont Journalists Want a ‘Shield Law’
By Ken Picard
Media
In the eight-page order, provided to Seven Days by WCAX, VanBenthuysen acknowledged that the case marked the first time a judge had been asked to apply the shield law. He described the new statute as replacing an old "common sense approach" with "a far more stringent and comprehensive set of journalistic privileges."

The WCAX video sought by investigators captured the moment police opened fire on Nathan Giffin during a public standoff near Montpelier High School in January 2018.

The footage fell under the portion of the shield law that covers nonconfidential information. In order to compel a journalist to disclose it, the state had to prove that the material was highly relevant to a legal issue, could not be obtained by alternative means and was subject to a "compelling need" for disclosure.

VanBenthuysen concluded that the state's attorney couldn't prove that he had no other way of obtaining the information contained in the video. Specifically, prosecutors had not reviewed the dozens of witness statements and other evidence in the investigative file — nor had they subpoenaed a different television station that had videotaped the standoff.

"The State cannot successfully argue that it lacks alternatives to the Channel 3 video when the prosecutors themselves have no idea what is, in fact, in their own investigative files," he wrote.

In a footnote, the judge also noted that the shield law defines a journalist quite broadly, potentially extending privilege to any citizen who engages in activity that could be construed as reportorial:

It would seem that anyone with a smart phone and email account might be considered a journalist if they film something noteworthy and then broadcast or post it to social media like YouTube; not to mention the millions of "bloggers" or social media users who regularly "report" or "distribute" what they consider to be "news."


Vermont journalists lobbied for the shield law's passage in 2017 after incidents in which reporters, including Seven Days staff, potentially faced jail time if they refused to divulge certain information in court.