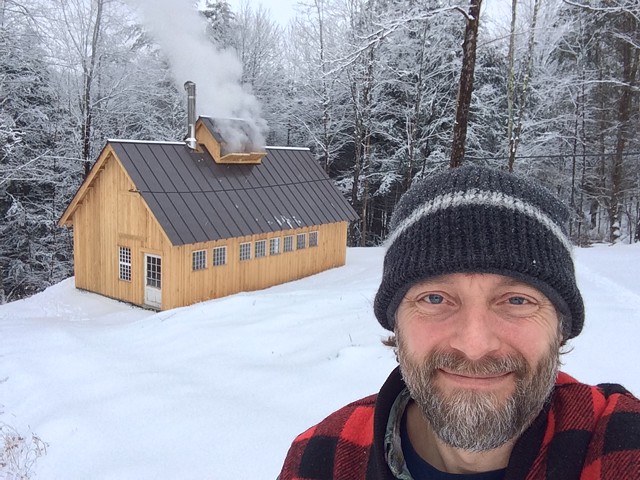 Just 20 years ago, Cory Krieg was startled to hear about a Vermont maple sugar operation with 10,000 taps. It was the largest he’d heard of.

In the two decades since, Krieg has watched Vermont’s maple syrup industry expand and change shape. Large operations have moved in, consolidating production. Demand for syrup has risen, but so has supply.

Nowadays, 10,000 taps is nothing special. The state’s largest sugarmaker, Sweet Tree Holdings in Island Pond, has 500,000, with plans for 1.5 million.

As Vermont’s largest maple sugarmakers expand, their medium-sized counterparts are struggling to fit in. Many produce too little syrup to interest bulk producers but too much to bottle, market, and deliver themselves.

Krieg started designing a possible solution last year. While working days at his  job as an electrical engineer in Lebanon, N.H., he created a cooperative-like network for small maple sugar producers that provides some of the convenience and affordability of a larger operation. Dubbed Maple Farmers, the cooperative provides its five members glass quart jars, along with labels, cardboard boxes, and packing material. Krieg markets the syrup, and when the orders come in, he sends the mailing labels to the farmers so they can ship the syrup out themselves.

“A lot of the people I am working with don’t even have email, or don’t even check their email,” he said. That makes it difficult for small sugarmakers to compete with the companies that have websites and online marketing.

“Working collectively, we’re all marketing under one online store,” he said.

As the middleman, Krieg isn’t making any money — but he’d like to. He plans to expand his new business across all of the maple-producing states, picking up small producers who have been making $5,000 to $10,000 a year by tapping trees. His members so far are a sawmill operator, a couple of dairy farms, a beef operation and his wife’s flower farm. All have 800 to 1,000 taps.

“They are farmers; it’s not like sugaring is their main industry,” Krieg said. “I hate the thought of them losing their extra income. I want to help preserve that.”

Vermont's the top maple producer nationally, by far, with sales worth $54 million in 2018.  Production has nearly doubled in the last decade, according to a report released this year by the Vermont Sustainable Jobs Fund and the Vermont Agency of Agriculture, Food and Markets.

While most Vermont producers are small, with an average of 3,451 taps, a group of large-scale producers with more than 5,000 taps makes most of Vermont’s syrup, the report said. Those include Runamok Maple in Fairfax, with 71,000 taps, and Butternut Mountain Farm in Morrisville, which has 25,000 taps and one of the largest maple processing facilities in the country.

Sweet Tree Holdings is the largest maple syrup processor in the world, the Agency of Agriculture report says.

Vermont Maple Sugarers Tap Tradition, Technology and New Products
By Hannah Palmer Egan and Sally Pollak
Agriculture
Krieg and others compare the rapidly consolidating maple industry with the state’s dairy industry, which has seen its farm count drop precipitously in recent years, from about 1,000 in 2010 to just 664 this year, according to the Vermont Agriculture and Food System Strategic Plan.

There are a number of forces pressing on Vermont dairy farms, but a chief concern is a prolonged drop in milk prices.

The No. 1 threat to the maple industry, meanwhile, is global warming, according to the Agency of Ag's report. Also high on the list are the price constraints imposed by the global maple syrup market leader, Québec, where output is growing rapidly.

In a piece for industry trade publication Maple News four years ago, sugarmaker David Folino warned his peers to be careful about debt as they expanded their output in a period of high demand.

“They should be proud of how rapidly they have grown their industry, but they should also be wary of rampant growth that exceeds market demand,” wrote Folino, a sugarmaker in Starksboro. “The economics of supply and demand are not a straight line.”

Krieg has heard from bulk producers that there's too much paperwork associated with purchasing syrup to buy small amounts.

“It’s much easier to buy the 50-gallon drum rather than do the paperwork for five gallons or 10 gallons,” he said.

Krieg’s members differ from their larger counterparts in other ways, too. They all use wood-fired evaporators, not the reverse osmosis that has gained popularity over the last two decades as a way to speed up the process of creating syrup from sap. Traditional boiling produces a better flavor, he said.

“I’m not saying I would never use reverse osmosis, but these days people can take it to more than halfway to syrup without ever boiling it, and then they put it in a pan and it just turns to syrup instantly,” he said. “To me, it’s not farming ... the flavor must be compromised.”

Krieg’s primary job this month is getting ready for the sugaring season, developing a social media presence and finding farmers who want to join up. He's ready.

“Right now, my wife’s flower shop is packed to the gills with bottles,” he said.
Prev
Next