Make It Maple Revs Up on the Food Network | Bite Club

Make It Maple Revs Up on the Food Network 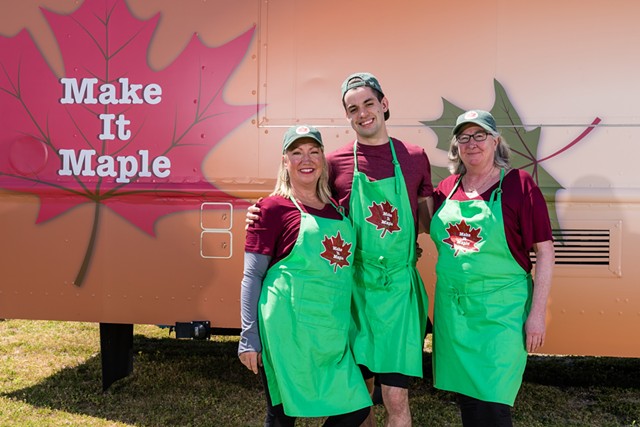 A trio of food-truck and showbiz rookies from Montpelier are contestants in the upcoming season of  "The Great Food Truck Race,” a Food Network TV show that kicks off its 10th season Sunday, June 9, at 9 p.m.

Sue Aldrich, her son Charlie Aldrich, and her friend Paulette Fiorentino-Robinson  form a team called Make It Maple. It’s one of nine food-truck teams competing for a $50,000 prize by cooking and peddling food on a southern road trip along the Atlantic seacoast.  The teams, including Brunch Babes (Grand Rapids, Mich.) and the People's Fry (Nashville), also compete in various culinary challenges. Each week,  the truck that makes the least amount of money is eliminated from the competition.

“There was a really good vibe among all the competitors,” said Fiorentino-Robinson. “We feel like we made friends for life.”

Sue Aldrich, 58, is a realtor who loves to cook for family and friends. She worked as a waitress in college but had no professional cooking experience. She does, however, have some reality TV experience:  She appeared on an episode of "House Hunters."

Fiorentino-Robinson, 53, is a retired kindergarten/first-grade teacher from Union Elementary School in Montpelier. She cooked with her students in the classroom and enjoys preparing and hosting dinner parties at her home.  She was a waitress in college who has done a little catering. Both women love to watch cooking shows on TV, though neither had previously cooked within the confines of a truck.

“Once you get your system down, it’s not only doable, it’s enjoyable,” Sue Aldrich said. "I think it’s the perfect idea of being a cook and not being tied down to a restaurant and a restaurant schedule. That’s the real beauty of food-truck cooking: You can go to different events, meet people, and after a few hours you can shut down.”

Charlie Aldrich, 23, is a graduate of the University of Rochester, where he studied British and American literature as an English major. He was the front-of-the-house person on the Make It Maple team: talking (and singing) to customers, handling the money (cash only), drumming up business and taking selfies with people.

“He was the connective tissue,” Paulette said. “He related well to people. He’s fun.”

Make it Maple’s Vermont-themed cuisine, made with maple syrup from Morse Farm in Montpelier, included a chicken-maple banh mi sandwich; grilled polenta coins drizzled with hot maple butter and served with arugula with Bayley Hazen blue cheese and bacon; maple-steamed dumplings topped with whipped cream and lime zest, and the Verbano — a local take on the Cubano sandwich made with maple-roasted pork, ham, maple mustard, pickles and cheddar cheese.

The Vermont team brought maple nips down south to share with people connected to the show and others whom they met.  "We were crazy with the maple,"  Fiorentino-Robinson said.

Amid the sweet flow of maple syrup, the pressure was intense on the truck and the laughter  plentiful.  “It was mayhem,” Aldrich said.

The pairing of maple and mayhem brings forth language you might not expect from a 20-year veteran of a kindergarten classroom.

"The food was fucking delicious," Fiorentino-Robinson said.
Prev
Next