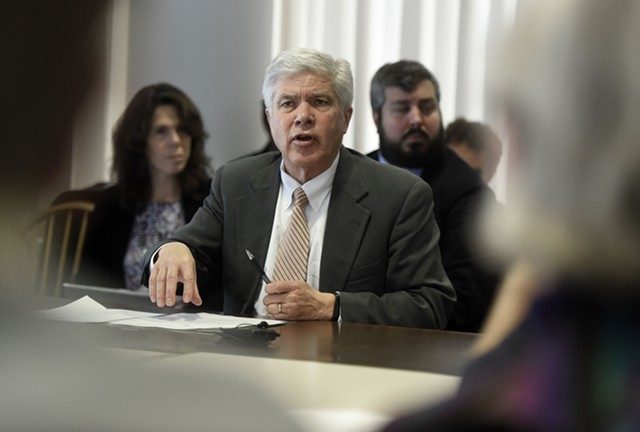 Vermont officials say they hope to soon resume an investigation into allegations of wrongdoing at the state's only prison for women, though a new inmate coronavirus case could jeopardize their timeline.

Smith told Seven Days earlier this month that the investigation had been suspended, citing safety concerns related to the pandemic. But last week, he said that the state must forge ahead with the review in light of yet another allegation of misconduct — this time involving a Department of Corrections probation officer from Brattleboro.

"We can't allow this to happen," Smith said at a press conference last Friday, one day after the officer was arrested for sexual misconduct with a woman he was supervising.

Smith has hired former U.S. attorney Tristram Coffin to lead the investigation. At a press conference Monday, the secretary said that he hoped the review would start again within the next 14 days. "We'll use all testing protocols to make sure that the inmates are safe with visitation of the various investigators," he said.

But an Agency of Human Services spokesperson later confirmed that the state's timeline will depend on results from mass testing now underway at Chittenden Regional, where a recently admitted inmate tested positive for the virus on Saturday.

Smith shared several details about the new case on Monday, confirming that the inmate came into contact with some guards and inmates while her test results were still pending. He said the state is now investigating why that was allowed to happen.

Related Probation Officer Arrested for Sexual Exploitation of a Supervisee

Probation Officer Arrested for Sexual Exploitation of a Supervisee
By Paul Heintz
Off Message
Vermont has increased testing at its six in-state prison facilities. Every inmate is tested at intake, and the state has conducted one round of mass testing at every facility in recent weeks, swabbing roughly 1,250 inmates to date. Until last week, only the Northwest State Correctional Facility in St. Albans had any non-staff cases, with at least 45 inmates and 17 employees infected.

The state has since reported a new case at the Marble Valley Regional Correctional Facility involving an inmate who was transferred from Florida.
Facility-wide testing over the weekend returned no further positive results, Smith said, and the DOC plans to retest all inmates and employees there next week.
Prev
Next