Homeless Will Return to North Beach Campground — In Tents | Off Message

Homeless Will Return to North Beach Campground — In Tents 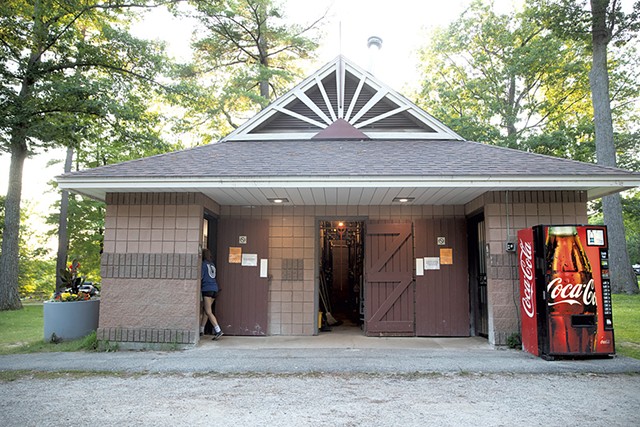 ANEW Place will begin operating a 30-tent shelter on June 1, according to executive director Kevin Pounds. Guests had previously stayed there in leased camper-trailers.

The popular spot will otherwise be closed for camping this season, though pedestrians, cyclists and vehicles can still access the property, according to the Burlington Parks, Recreation and Waterfront Department. City officials did not immediately respond to an interview request.

The 137-site North Beach Campground draws nearly 30,000 visitors between May and October every year. Campsite reservations there accounted for more than $625,000 in revenue in 2018.

Related A Reporter Soaks Up Campground Culture at North Beach

A Reporter Soaks Up Campground Culture at North Beach
By Chelsea Edgar
Outdoors & Recreation
Pounds is grateful that the city has offered up the space.

"This is a unique situation," he said, adding, "The city has been very proactive in working with us to find solutions."

The tent city will be the third iteration of the low-barrier shelter since the coronavirus pandemic began. In late March, the shelter relocated 26 guests there from its South Winooski Avenue facility to leased camper-trailers. When the lease ended earlier this month, about half the campers moved to hotels; the other half declined the accommodations.

North Beach Campground Will Shelter Burlington Homeless
By Courtney Lamdin
Off Message
The tent site will operate similarly to the camper setup. Guests must reserve a spot by 7 p.m., check in by 10 p.m. and ideally stay on-site until 7 a.m. the next day, Pounds said. ANEW Place staff will be on-site 24-7.

The campers will be served dinner and morning coffee, just like at the brick-and-mortar shelter, and they'll have access to the public bathrooms at the campground, according to Pounds.

But unlike the trailers — which were used by multiple people and cleaned in between lodgings — the tents will be assigned to a camper for the duration of the summer. ANEW Place will begin a donation drive next week for 30 tents, tarps, air mattresses, pillows and flashlights, Pounds said.

"We know that tenting in Burlington is prevalent during the warm weather months," he said. "This is a way for us to proactively address that and create a safe way for people to do that while also hopefully preventing the spread of COVID-19."

Pounds also realizes this fix is only temporary. Campers will need to sleep indoors when cold weather creeps back in, and the South Winooski spot is too small to adhere to physical distancing guidelines. ANEW Place is currently working on a proposal for a "long-term, low-barrier facility" to be in place by November 1, Pounds said.
Prev
Next