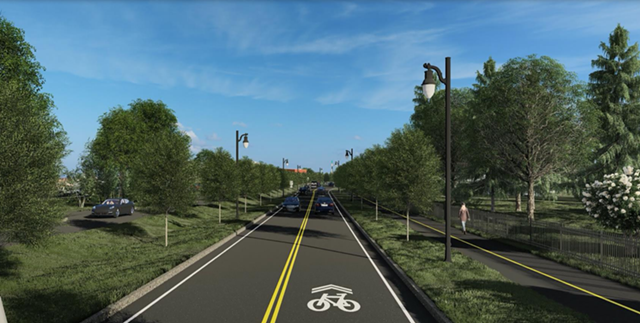 Construction on the long-planned Champlain Parkway is now scheduled to begin in spring 2021.

Burlington Public Works Director Chapin Spencer told the city council Monday night that "a shrinking number of legal challenges" remain but a start date next year is realistic. The 2.8-mile road through Burlington's South End has been in the works since the 1960s.

"We've made solid progress on this project," Spencer said, noting that the city has finalized utility and right-of-way agreements.

"These are milestones that have put the project in a position where we could be out to bid in seven or eight months," he added. "We're confident we can get there."

Spencer said last May that he expected the city would begin construction by December 2019. But that June, a grassroots group known as the Pine Street Coalition filed a federal lawsuit seeking to delay construction. They argued that the parkway design relied on outdated population, traffic and land-use data.

Burlington Citizen Group Sues to Stop Champlain Parkway
By Courtney Lamdin
Off Message
Last August, a judge granted the coalition's motion to halt construction and required the city to reevaluate how the project impacts minority and low-income populations in the King and Maple street neighborhoods, VTDigger.org reported at the time.

The city and Federal Highway Administration are currently working on that environmental justice review, according to Jonathan Rose, an attorney with Dunkiel Saunders who is consulting on the parkway project for the city. The study results are expected this summer and will be open to public review and comment, according to Spencer.

On Monday, coalition member Tony Redington urged the city council to consider an alternative street design for the project, which would create a sidewalk and "separate bikeway" from Queen City Park to Main Street. The current design features shared-use paths for cyclists and pedestrians. Redington asked the council to refer the topic to its transportation committee for further review.

South End resident Ben Traverse, however, said that process would only further hold up the long-delayed project.

"I respect the advocacy efforts of the Pine Street Coalition and think their efforts have further improved the parkway project," he said, "but unfortunately, at this point, I believe the goal of the coalition is simply to delay ... to the end of killing this project."

Federal funds will pay for 95 percent of the nearly $45 million parkway project, while the state will pitch in 3 percent. The city's 2 percent share — plus added expenses to dispose of contaminated soil, bury utility lines and make other improvements — amounts to $3.4 million, according to Spencer.

Later in the meeting, Mayor Miro Weinberger told councilors that the low-barrier homeless shelter at the North Beach Campground closed earlier Monday. The park had hosted 26 people who normally stayed at ANEW Place's 40-bed shelter during cold weather months. Shelter staff relocated there so that guests could adhere to social distancing requirements.

North Beach Campground Will Shelter Burlington Homeless
By Courtney Lamdin
Off Message
The state chose to not renew its contract with Country Camper in East Montpelier, which had provided the RVs, Weinberger said. About half of the homeless folks staying there are now using the state's hotel voucher program; the other half chose not to, he said.

"Today's announcement that this has been disbanded is in some ways an indicator that we still have work to do," Weinberger said. "It remains a priority of mine to see on a permanent basis a low-barrier option during warm weather months."
Prev
Next