Crisis management is Heather Bush’s forte, and in the age of the coronavirus, she’s never been more in her element.

Bush is the coordinator for Burlington’s only low-barrier homeless shelter on South Winooski Avenue, a 40-bed facility that’s typically open from November through April. But as Vermont’s COVID-19 cases continued to climb, Bush realized her clients couldn't socially distance themselves in the crowded, poorly ventilated basement.

“We were sort of sitting ducks just waiting for the virus to come in,” Bush said.

Last Saturday, she told her boss at ANEW Place, the Burlington nonprofit that oversees the shelter, that they needed another option. Four days later, the plan is in motion: The shelter-goers are going camping.

With help from city and state officials, ANEW Place is relocating 26 homeless people to camper trailers at Burlington’s North Beach Campground. Employees of Country Camper in East Montpelier worked through the night Wednesday to set up the trailers, which are outfitted with electricity and running water. The state is paying to lease the campers, according to ANEW Place executive director Kevin Pounds.

On Wednesday afternoon, Country Camper employee Harold Donald said he came out of retirement to help the effort. “It gives me something to do,” he said as he rolled his oversize pickup truck out of the muddy parking lot.

Thursday morning, Bush was bustling around as she made final preparations at the site. Between answering questions from a Seven Days reporter, Bush was shuttling supplies to the campground, dispatching staff, and packing up items to wait out the virus and contain its spread.

“I’m going to get keys to the campers right now, and we’re gonna start moving this afternoon,” she said. “Everyone was told last night and asked to have their things bagged and ready to move.” 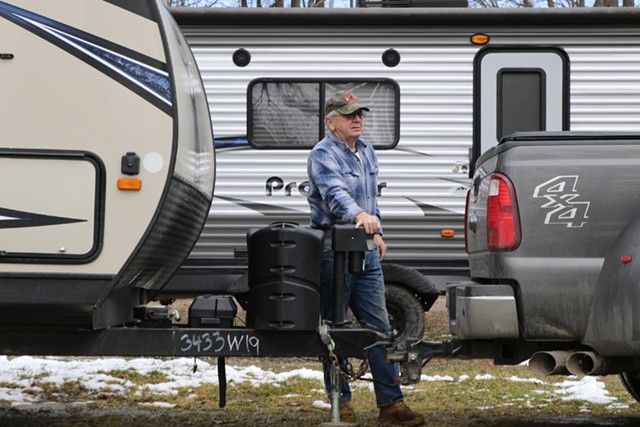 Bush has worked for ANEW Place since last October, but she’s spent years working in human services. She was most recently a case worker at Safe Harbor Health Center, which provides care to the homeless and is located across the street from the low-barrier shelter.

Now, Bush can add camp counselor to her résumé. Because of Gov. Phil Scott’s stay-at-home order, the camp shelter will operate 24-7; the brick-and-mortar facility was only open from 5 p.m. to 8:30 a.m.

Each trailer has heat, electricity, at least one bed, a radio and a bathroom. The cooking appliances won't be operable.

Staff will occupy an additional trailer and make rounds every hour, knocking on doors to check in, though they'll generally try to maintain social distance. Staff will only enter the trailers if a camper doesn’t respond after two rounds, Bush said.

The staff already have protective equipment but could use more masks, she added. The shelter will continue to provide meals, but they’ll be served in individual containers.

Bush said staff will enforce similar rules at the campground as at the normal shelter. With the exception of getting smoke breaks, shelter guests were locked in for the night and weren’t allowed to use drugs or alcohol on the premises. At the campground, guests are generally expected to stay in their trailers unless they're doing something allowed under the governor's recent stay-at-home order. Staff won't allow drinking outside but will allow it inside the campers.

Scott Issues Stay-at-Home Order as Coronavirus Spreads
By Colin Flanders
Off Message
“Otherwise, we’re looking at potentially deadly effects like withdrawal,” Bush said, noting that “a significant number” of shelter guests are daily drinkers. “They will still have to leave to go to a gas station to get alcohol, but the idea is that they will not be downtown hanging out on the streets with large groups of people.”

Still, Bush expects the camp population will be in flux. ANEW Place has already relocated some shelter-goers to motels, but Bush said that won’t be a long-term solution for everyone. When trailer tenants turn over, staff will fully sanitize the space before allowing another person in, she said.

Pounds, the ANEW Place executive director, was impressed with how quickly the effort came together, saying the city and state accomplished "about three months of paperwork and logistics in three to four days."

"It's a sign of Burlington's values and the State of Vermont's values that we are moving quickly to make sure that everyone in this community is sheltered and protected and gets the support they need through this emergency," he said.

Bush isn't privy to how much these extra measures will cost but said money isn’t a primary concern in a time of emergency.

“Having people be basically at the whim of this virus and the repercussions of this virus is more significant than the money that will be spent to hopefully reduce the impact of the virus,” Bush said.