Scott Extends Vermont's State of Emergency Into June | Off Message 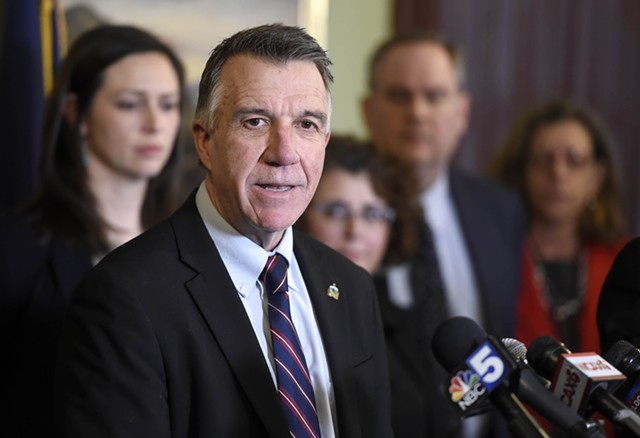 Gov. Phil Scott on Friday detailed further plans to transition Vermont out of the coronavirus crisis and into recovery mode, with the hope that more people can soon return to work and other activities.

And while he moved to extend his state of emergency at least another month, Scott vowed to continue relaxing orders meant to keep Vermonters home — as long as recent positive trends continue.

"Even as we've slowly restarted the economy over the last four weeks, we continue to move in the right direction," Scott said at one of his thrice-weekly press briefings. "In fact, we have the lowest three-day and seven-day growth rates in the country."

Scott said current coronavirus modeling data show that the state can continue opening up sectors of its economy in the coming weeks. Vermont reported only one new case on Friday and has averaged less than three daily over the last week.

Scott said specific announcements likely to come by June 1 include the reopening of close-contact businesses and the start of outdoor dining. He said he also expects to increase the size of allowable gatherings from 10 to 25 people.

On Friday, officials also announced new guidance for lodging facilities, which have been unable to accept nonessential guests since late March. Starting May 22, lodging operations, short-term rentals, campgrounds and marinas may accept overnight guests including both Vermonters and people from out of state as long as they have met the 14-day quarantine requirement, according to Commerce Secretary Lindsay Kurrle.

Operations can only book up to 25 percent of their capacity and must ensure that there are no gatherings of more than 10 people. They must also limit all direct services — such as check-in and housekeeping — to the greatest extent possible, and maintain a guest log of at least 30 days "in case contact tracing is required," Kurrle said. And patrons must fill out a questionnaire confirming that they have met the quarantine requirement.

Lodging will become the latest sector of the economy to reopen in limited fashion this month. On Monday, Scott said retail stores that follow certain health guidelines can reopen May 18. And the administration announced last week that childcare centers may reopen on June 1, with summer camps also allowed to operate this year.

Michael Pieciak, commissioner of the Vermont Department of Financial Regulation, who has overseen the state's modeling efforts, said that new coronavirus cases have risen slightly after each turn of the economic spigot. But he said the state has not seen any "considerable uptick" and noted that only one COVID-19 patient was hospitalized in an intensive care unit as of Friday.

"This week, we are reporting a common theme: Vermont's trends are continuing to improve, and we are performing better than forecasted," Pieciak said. "In fact, Vermont's COVID-19 experience stands out for its success regionally and serves as an example nationally of a state well positioned to safely and strategically reopen its economy."

State officials announced some positive news as well about the state's only prison for women, the Chittenden Regional Correctional Facility. Staff and inmates there were tested en masse after an officer was found to be infected. But none of the 42 staff or 76 inmates tested positive, officials said Friday.

Though some Vermonters have called on Scott to speed up his recovery plan, others have pushed him to take more proactive steps to protect those already returning to work. For example, some business leaders have pressured Scott to mandate that people wear masks whenever in public, calls that have risen in light of the anticipated reopening of retail.

Scott has said he prefers to educate Vermonters about facial coverings rather than mandate their use. But he noted last week that he would consider additional steps if people don't wear them voluntarily and said Friday that he now believes it is appropriate for municipalities to adopt stricter mask-related rules if so inclined.

Health experts around the country remain unsure whether the pandemic will return with another wave later this year as more and more states reopen their economies.

With that in mind, Scott has repeatedly stressed that it is too early for the Green Mountain State to declare victory against the virus, especially with outbreaks still a threat in nearby states. But after governing in crisis mode for the last two months, Scott allowed himself a brief moment on Friday to reflect.

"We're now two months into the state of emergency, and I've got to admit, it seems like a year ago. It's incredible to think back on all that's happened since early March," he said. "We've all been through a lot.

"In the beginning, we saw how quickly things closed down, one by one," he continued, "and now, our emotions are raw as we methodically reopen. All this has been difficult for all of us. I just want to say how proud I am to serve as your governor, seeing Vermonters step up time and time again."
Prev
Next