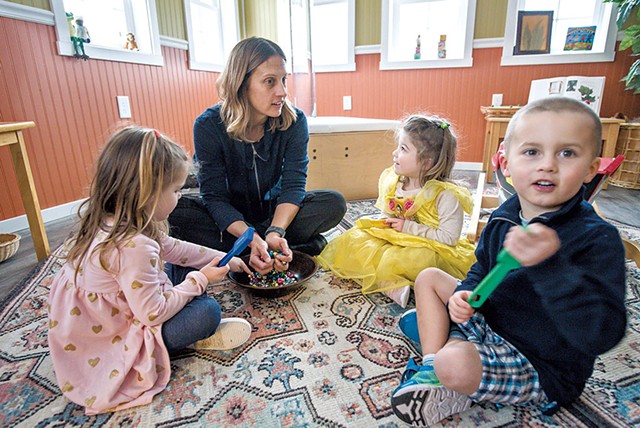 Vermont on Wednesday released guidelines that childcare, summer and afterschool programs must adhere to as they reopen in the coming weeks.

The 13-page document, compiled by the Department of Health, Agency of Education, and Department for Children and Families, provides detailed instructions for childcare providers related to staffing, physical distancing and hygiene in an attempt to prevent a coronavirus outbreak.

But the guidance is worrying to some providers, including Kate Driver, a center director at Next Generation, a childcare program with campuses in Georgia and St. Albans that serves around 80 infants through preschoolers. After reading the document on Wednesday, she said, there were “a lot of things that raised flags.”

Those in early childhood education have worked hard to be seen as educators, Driver said, but under these guidelines, “we’re now just going to be babysitting … The educational component of what we do is gone.”

She took issue, for instance, with a requirement that all program staff wear cloth facial coverings while providing care. Such coverings are also recommended for children, except those under 2 years old.

“Some children are terrified of people with masks,” Driver said. “How are these children going to communicate with each other? How do you have something on a child’s face and tell them not to touch it?”

Among those who should not provide childcare during this time, according to the guidance, are pregnant women, adults 65 and older, and those with underlying condition like heart disease and diabetes. All childcare staff are required to complete a mandatory training on health and safety requirements.

Coronavirus testing will be available for childcare, summer and afterschool providers who want to be tested, even if they are asymptomatic. Such a test can’t be used as a requirement for employment, the document says.

Children should “ideally” be dropped off and picked up by the same person every day, and the guidance discourages older people, such as grandparents, from serving in this role. Programs should consider staggering drop-off and pickup times, and caregivers should limit direct contact with parents. Daily reports from caregivers should be provided over the phone or electronically as often as possible, the document says.

Upon arrival, all students must undergo a daily health check, which includes verbal questions, a visual inspection for symptoms consistent with COVID-19 and a temperature screening. Staff must wear eye protection and a clean pair of disposable gloves while taking each child’s temperature.

“People with a temperature greater than 100.4 F must be sent home until they have had no fever for 72 hours without the use of fever-reducing medications (e.g., Advil, Tylenol),” the guidance says.

Children should be in groups of no more that 25, both inside classrooms and outside in play areas, and, when possible, staff members should remain with the same group all day. Children are encouraged to maintain distance during table work and nap time. Kids should sleep head to toe and six feet apart, if possible.

Those requirements, too, will be difficult, Driver said. Young children need to have interaction and connection with other children and staff members and do not understand the concept of physical distancing.

“We can’t put them each in a hula hoop,” she said.

Play things that cannot be sanitized such as soft toys, costumes and puppets, should not be used. And no outside visitors or volunteers are allowed in. There are also strict rules about handwashing often and staying home if a person is in close contact with someone who has COVID-19.

The document also addresses caring for younger children, who are often in closer contact with caregivers than older kids.

“It is important to comfort crying, sad and/or anxious infants and toddlers, and they often need to be held,” the document states. When washing, feeding and holding young children, staff are advised to protect themselves “by wearing an over-large, button-down, long sleeved shirt and by wearing long hair up off the collar in a ponytail or other updo.”

If “secretions” such as drool get on a staff member’s clothing, they should change. A child’s clothes should also be changed if there are secretions on it.

Driver doesn’t think it’s realistic to change her clothing every time a child’s saliva gets on it. “I don’t have 80 shirts at home that I can bring in,” she said. “What do you do if a child is teething, or if a child has gotten something on me, but another child needs something right away?”

Driver’s center emailed the state guidelines to parents on Wednesday night, encouraging their feedback. Many have already responded.

“This is insane,” wrote one mom, a nurse. “At some point, everyone just needs to realize there is some level of calculated risk in every single thing people do … The state needs to realize that if we lose quality childcare programs because they are making it absolutely impossible for these programs to function, then that is more detrimental to the children of this state.”

“Daunting” is how another family, with two parents in law enforcement, characterized the document.

“I don’t really care about all those restrictions. I’d be happy with whatever you could do,” the parent wrote. “Adhering to all that would be unreasonable.”

Gov. Phil Scott has pledged $6 million to fund “restart” grants to help childcare centers and summer programs reopen. Childcare staff are allowed to return to work on May 18 to prepare for children. Driver said she has not heard anything from the state yet about this funding and needs to know how much she will be receiving before her center can put plans in place to reopen.

Early childhood advocacy group Let’s Grow Kids released a position paper stating that $6 million is inadequate to reopen both childcare centers and summer programs. The organization instead asked the state to set aside at least $6 million to help just childcare programs cover increased operating expenses so that they do not have to raise tuition rates this year.

“We acknowledge that there are economic realities that make it seem like June 1st would be a good time to open,” the letter states. “We are also advocates for our students and are not willing to put children on the frontline of a virus that has affected so many when the data does not tell us we will be safe.”
Prev
Next