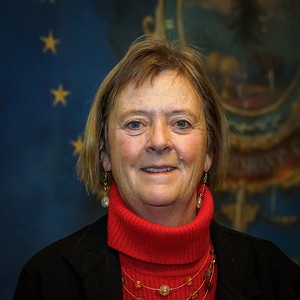 Mary Sullivan, a longtime Democratic state representative from Burlington, has announced that she will not seek reelection after 16 nonconsecutive years in the legislature.

Sullivan announced the news in a Facebook post Tuesday morning. Speaking to Seven Days shortly after, she said she had been contemplating the decision since the session began in January.

"I always wanted to go out when I was still loving the work and figuring that I could still do other things in life," said the 67-year-old retiree. "It wasn't an easy decision, but I'm still feeling OK with it."

Sullivan represents the Chittenden 6-5 District, which covers Burlington's South End and Hill Section. She served in the House throughout the 1990s, then took a job in communications at the Burlington Electric Department. She returned to the Statehouse after winning again in 2014.

Sullivan has spent much of her time in the legislature championing climate change issues. She served a three-year stint as cochair of the Climate Solutions Caucus and now sits on the House Transportation Committee and Joint Energy Committee.

She's also involved in party politics as one of Vermont's two delegates to the Democratic National Committee, a position that also gives her a seat on the state party's executive board. Sullivan said she plans to run for the DNC position again while looking for other ways to stay "active and involved."


Sullivan acknowledged her departure may spur more to join the race. "An open seat always kind of opens the floodgates," she said.

And while she spoke with Pavek "many months ago," Sullivan plans to hold off on making any endorsements, recalling past conversations with several people who have expressed interest in running if she were to step down. She said that fact made her decision a little easier.

"I think all of us need to know that there are people who will follow us, who can, you know, take over and continue the good work," Sullivan said. "I feel assured that in this district, people will rise up, and so it just felt like time."
Prev
Next