The Vermont House passed a package of emergency bills Wednesday to help the state deal with the impacts of the COVID-19 virus, but only after the effort was thrown into disarray by a lawmaker who demanded a quorum be present for the vote.

The parliamentary move forced dozens of legislators to rush to the Statehouse to pass bills House leadership had hoped — to reduce the risk of infection from the rapidly spreading coronavirus — a handful could address.

Ultimately, 94 House members drove to the Statehouse, filtered into the chamber and — many wearing masks, bandanas and scarves over their mouths — passed the bills nearly unanimously.

The irony of having more than 100 lawmakers, staff and media crowding into the House chamber to address a growing pandemic when Gov. Phil Scott had called for people to stay home and not gather in groups of more than 10 was plain.

Wearing a surgical mask from the podium, Speaker Mitzi Johnson (D-South Hero) praised her colleagues for going the extra mile to help Vermonters in their time of need and expressed regret that it became necessary.

“I am very sorry that we all had to put public health at risk today to come here,” Johnson said.

After closing the Statehouse two weeks ago, lawmakers have been working largely by conference call to craft emergency measures to help with the mounting health and financial crisis and to figure out how to pass that legislation.

The 30-member Senate met its quorum requirement Tuesday by having 17 senators return to vote in person, spaced well apart from one another in that body’s chamber.

The Senate passed bills that included allowing people to collect unemployment if they’d quit due to coronavirus concerns, making it easier for retired and out-of-state health care workers to work in Vermont or remotely, and making changes to election law that waived the need for candidates to gather signatures for 2020 races.

But the 150-member House didn’t want to bring a quorum of 76 members back to its chamber because of the risk of spreading the virus, which had infected 123 people in Vermont as of Wednesday.

The only way such a vote would work was if none of the members present called for a quorum.

“It is assumed that there is a quorum unless someone calls for a quorum,” Johnson later explained.

That’s exactly what happened. Just a few minutes into the session, with just 15 lawmakers present, Rep. Cynthia Browning (D-Arlington) asked if a quorum was present. Johnson quickly called a recess, strode down from the podium and over to Browning’s seat, and soberly tried to convince her to change her mind.

“Bringing 76 people back here puts the health of Vermonters at risk,” Johnson said to Browning.

But Browning was unmoved. She said one of the bills — which would allow the House to vote remotely on legislation in the future — could only be approved by a quorum present in the building. At that time, House rules didn’t allow remote voting, but it is envisioned it will be needed in the coming weeks and, possibly, months.

At one point, Rep. Robert LaClair (R-Barre) approached Browning and began speaking, but Browning cut him off.

“What are you doing right now? Are you negotiating with me?” she said.

LaClair tossed up his hands and walked away. 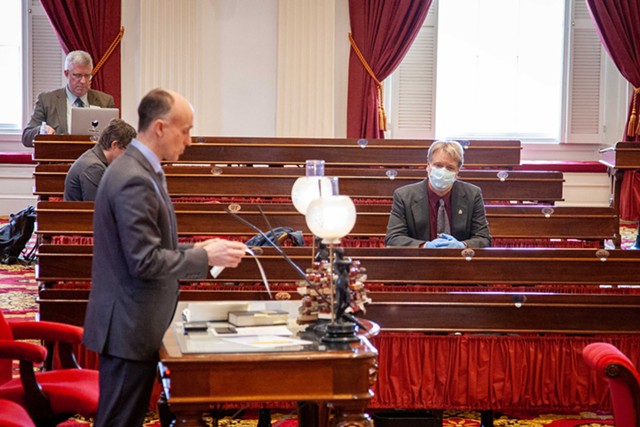 Outside the chamber, Browning said she was trying to ensure that the House followed its own rules.

“I understand the severity of the situation we’re in,” the 66-year-old lawmaker said. “But if you start cutting corners on parliamentary procedures and Democratic processes in an emergency, you’ll very quickly find that you’ve thrown something overboard that you can’t get back.”

Browning said she thought lawmakers could safely return to vote in person, just as the Senate had done. “I think Vermonters want things to be done properly,” Browning said. “I think the House chamber, big as it is, can accommodate members six feet apart.”

Her colleagues returned, but many were livid.

“I think people were put at risk because she’s self-centered,” said Rep. Sam Young (D-Greensboro), who was one of the original members in attendance. “She called 76 or more people into this room, against the advice of the governor, so that she could have her way.”

Young, who called Browning “theoretically a Democrat,” said he couldn’t fathom what she hoped to gain by the move except, perhaps, attention.

Rep. Kari Dolan (D-Waitsfield) said she was willing to make the trip when asked because getting the bills passed quickly was too important. But she agreed a small number of House leaders should have been able to take the vote.

“I think it was irresponsible, when you think about the members of the House exposing themselves unnecessarily and their families and those that they come in contact with,” Dolan said.

Johnson fumed. After setting the wheels in motion to have lawmakers travel to the Statehouse on short notice, she addressed the media and called Browning’s actions reckless. “I do believe this is principle over public health, and for me, the safety of Vermonters is of paramount importance here,” Johnson said.

Members of all parties had been consulted about the limited voting plan, and Johnson noted that Browning had not raised her concerns until she arrived at the Statehouse on Wednesday. Lawmakers had specifically closed the building to ensure that it was virus free, and that effort was jeopardized by the return of so many lawmakers at once, Johnson said.

It wasn’t initially clear whether leaders would be able to rally enough members on such short notice, but Rep. Dylan Giambatista (D-Essex Junction) predicted the needed reinforcements would arrive.

“We're calling in the tripartisan cavalry, and it’s going to be at least 76 strong," he predicted.

He was right. Over the course of about two hours, members steadily trickled in and took seats throughout the chamber — in the window seats, cushy red seats reserved for visitors, and even up in the balcony with the handful of media allowed in to cover the event.

Members with health issues or risk factors such as age were told to remain at home, Johnson said. 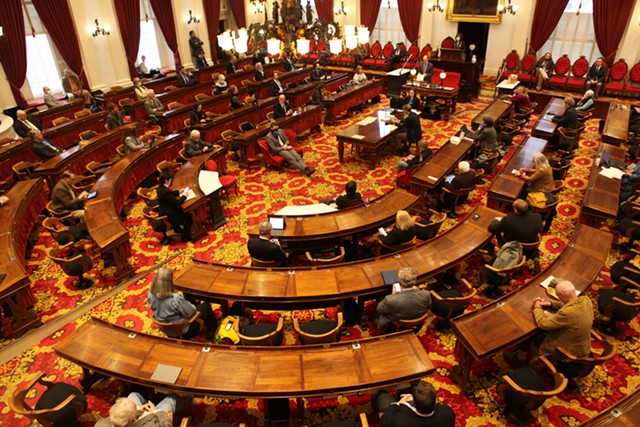 Not everyone was upset with Browning. Minority Leader Patty McCoy (R-Poultney) said she, too, had concerns about the remote voting and hoped that the speaker would limit it only to crucial, must-pass bills such as the budget. In a compromise, Johnson agreed that when the House conducted its first vote remotely, three-quarters of members would have to agree to do so going forward.

In the end, Browning was the only member to vote against any of the measures.

Majority Leader Jill Krowinski (D-Burlington) said the message she and Vermonters should take from the whole episode was not one of discord, but of a coalition of lawmakers willing to do whatever it takes to help in a crisis.

“Over 80 of us got in our cars and came to the Statehouse immediately to make sure we got these bills passed,” Krowinski said. “That kind of commitment and dedication is inspiring to me, knowing that we have a lot of work to do in front of us to protect and support Vermonters during this unprecedented time.”
Prev
Next