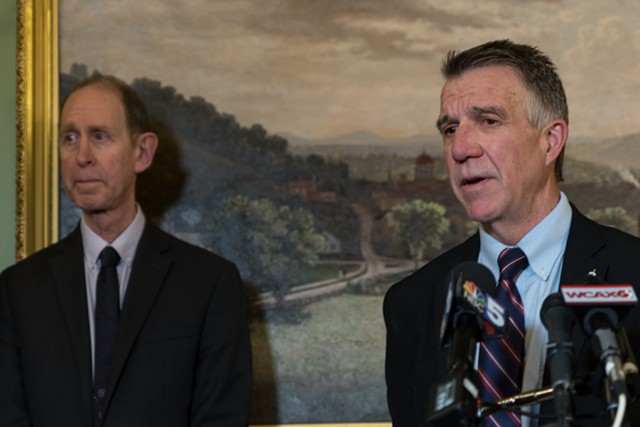 Vermont officials on Wednesday painted the bleakest picture yet of the potential impact of the coronavirus, warning the state may need to at least double its capacity of hospital beds, medical protective equipment and ventilators to prepare for the weeks ahead.

Health Commissioner Mark Levine said at a press conference that Vermont has experienced an "exponential growth" in coronavirus cases since the illness was first detected in the state a little over two weeks ago, with 28 new cases and one additional death reported in the last day alone.

Those figures bring the state's total to 123 cases and eight deaths, the latest of which occurred at the Burlington nursing home where five other patients have already died, Levine said.

"We don't yet know what the days to come hold, but we can anticipate everything will get higher," the health commissioner said.
Vermont officials have repeatedly stressed that the state's accelerated testing efforts will result in more reported cases. They have also cautioned that the worst is yet to come.

At the same time, health officials around the country have emphasized — perhaps in an effort to prevent widespread panic — that at least 80 percent of those who contract the virus will fully recover after experiencing only mild to moderate symptoms. Some people, particularly younger generations, have used that statistic to justify defiance of social distancing guidelines aimed at slowing the spread of the virus.

Levine said global health officials have treated people between the ages of 20 to 50 "much sicker than what was advertised."

“And we're finding worldwide that some of the deaths fall in those categories, too,” Levine said.

“I'm not saying this to be scaring anybody,” he continued. “But at the same time, we have to be realistic that in large-scale outbreaks of disease, that if you have 100,000 people that are sick, 20 percent of them may be younger [who are] hospitalized.”

It’s unclear just how many Vermonters may contract the virus before the outbreak subsides. At a press conference last week, state officials said they were consulting with experts to examine "best-case and worst-case scenarios,” which can help predict how many patients may need treatment at the height of the crisis.

But Vermont only had 29 cases at the time, well below the threshold of 100, at which forecasting models are typically more accurate, officials said. And while they had some data internally, officials said they were still working to firm up projections before releasing them publicly.

Fast-forward five days, and the public has yet to see those projections. But comments from Agency of Human Services Secretary Mike Smith on Wednesday shed some light on what they have shown.

"As we're looking at the surge here and looking [at what] Dr. Levine showed on his charts, I think at a minimum we've got to double all of the numbers," he said.

Area hospitals have already taken steps to free up beds, and Vermont has asked the National Guard to help it establish three overflow medical facilities around the state. Officials said that should add 250 beds to the state’s capacity.

“We bought millions of dollars in ventilators over the last few days,” Schirling said, a figure that represents roughly 200 machines. “Folks have been asking, ‘How many do we need?’ The answer is, as many as we can get ahold of. So we're buying them as fast as possible.”

Wednesday's sobering statements from Vermont officials — who were gathered to discuss Gov. Phil Scott’s stay-at-home order, his strictest mandate yet — starkly contrasted the upbeat messaging from the White House a day earlier.

President Donald Trump on Tuesday declared that he sees the “light at the end of the tunnel” and said he expects the country will be "opened up and just raring to go by Easter.”

Asked about that prediction Wednesday, Scott said it was “a bit overly-optimistic, to say the least.”

Scott’s stay-at-home order, which goes into effect 5 p.m. Wednesday, allows people to leave home only for "essential reasons," including grocery shopping; picking up medications; curbside pick-up of goods, meals or beverages; medical care; exercise; caring for others; and work.

It also requires that Vermont businesses and nonprofits cease in-person business. Operations that can be done online or over the phone — or sales that can be done with curbside pickup or delivery — can continue, according to the order. That includes restaurant takeout service.

The governor confirmed Wednesday that people can still go outside to walk their dogs or cross-country ski. “Just keep your distance from others while doing so,” he said.

Levine, who called Vermont's rise in cases and deaths "very concerning," said the slope of Vermont's epidemic curve could start to mirror countries hit hardest by the disease if the state does not slow the spread of the virus. But while Scott called his stay-at-home order one of the strongest in the nation, he implied that it may still not be enough.

He said he’s already planning to suspend all Amtrak service in Vermont starting Thursday and warned that further measures may be necessary if cases continue to rise.

"I need you to stay home," he said. "Doing so will save lives. It's just that simple." He later added, “It may not have affected you yet, but all too soon, many of us will know someone personally. Then it will start to feel very real.”