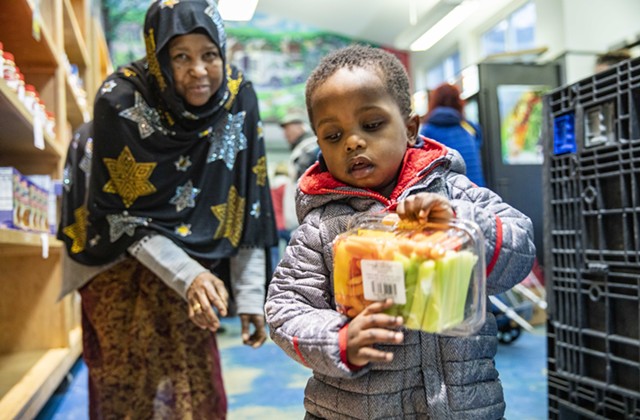 The largest food shelf in Vermont saw a surge in demand this week as the economic impacts of the COVID-19 crisis began to hit home for residents.

Feeding Chittenden handed out groceries to 282 people on Monday alone, a 30-percent increase in its typical volume. The spike forced the organization to make a desperate appeal for additional funding.

“We’re trying to figure out how we’re going to meet the growing need,” said Rob Meehan, the nonprofit's director. “We were already facing a deficit, and when this happened, we went ‘Oh, my God. We need to ask for help financially.’”

The group has been feeding low-income Chittenden County residents for 46 years. It operates a soup kitchen and food pantry on North Winooski Avenue in Burlington, a warehouse in South Burlington, and a food truck and food delivery service for people who are homebound.

Given that everyone is pretty much homebound right now, the organization has seen a sharp increase in that program as more people are in need of food and afraid or unable to leave home, Meehan said. 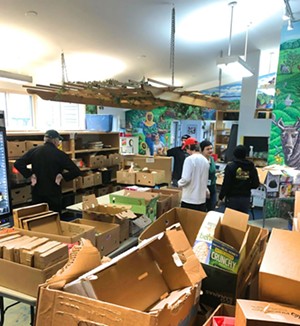 The spike in demand is doubly challenging because the organization has been forced to dramatically change how it distributes food. The soup kitchen switched to takeout because of restrictions on public gatherings, and the pantry can no longer allow people to enter and select the items they need.

Instead, workers are boxing up staples, such as peanut butter, bread, soup, pasta, and macaroni and cheese, and handing them out to people waiting in line at the door, Meehan said. People who make less than 185 percent of the poverty level qualify for grocery assistance, but no one is turned away — and more are eligible with recent layoffs.

Much of the food is donated through arrangements with local grocers, but the food bank needs to buy food at times, as well. Without an influx of cash — they’re trying to raise $75,000 to keep the food flowing — the cupboards could go bare pretty quickly, he said.

Compounding the problem is the fact that the organization must be cautious about donations if they can’t be certain how and by whom they’ve been handled, he said. Meehan said he isn’t sure how other similar organization are faring in the state but knows at least one smaller organization has closed its doors due to safety concerns. To donate to Feeding Chittenden, click here.

Other organizations are helping people in need due to fallout from the pandemic, which has already resulted in a sharp increase in layoffs and is widely expected to trigger a global recession.

The ONE Good Deed Fund, which raises money to help Burlington residents in need, announced it had allocated $1,400 in just three hours on Wednesday to those who have lost income due to pandemic-related closings. For more info on the organization, click here.

Correction, March 19, 2020: A previous version of this story referred to Feeding Chittenden as a food bank. It's actually a food shelf that receives support from the Vermont Foodbank, the only such organization of its kind in the state.
Prev
Next