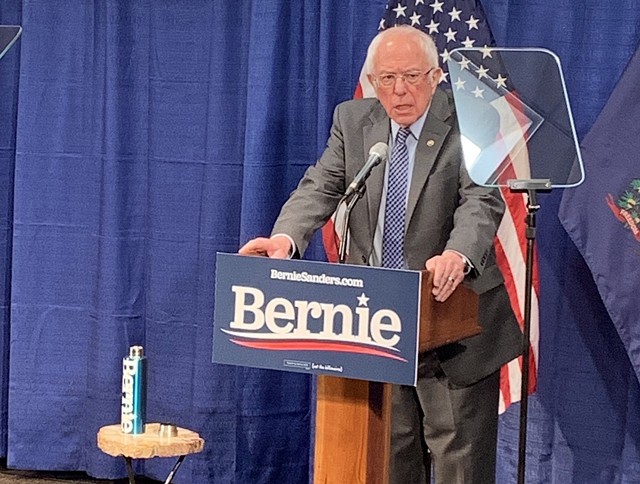 Speaking from Burlington on Friday, Sen. Bernie Sanders (I-Vt.) made his case that the unfolding coronavirus pandemic has exposed the "absurdity" of the country's economic and health care systems.

On Thursday, Sanders compared the pandemic to a world war and called for proportional emergency response. Friday's comments signaled that the Democratic presidential candidate sees coronavirus as a chance to broaden the appeal of "Medicare for All" and other proposals that his opponents for months have cast as too radical.

Sanders Likens Coronavirus to 'Major War' and Calls for Massive Response
By Derek Brouwer
Off Message
"If this isn't a red flag for the current dysfunctional and wasteful health care system, frankly, I don't know what is," Sanders said.

Sanders and campaign front-runner Joe Biden have canceled most public events because of coronavirus, stymieing the large rallies that have been a hallmark of Sanders' presidential run at a crucial moment. He is losing valuable time to reverse his fortunes in the primary, with elections in delegate-rich states such as Ohio and Florida scheduled for next week.

After String of Losses, Sanders Says He’ll Remain in Race
By Paul Heintz
Off Message
That could change. On Friday, Louisiana postponed its April 4 contest, making it the first state to alter election plans.

Asked about the prospect of holding primaries during the outbreak, Sanders said that state officials ought to weigh the risks carefully.

But he made clear that he intends to link the outbreak to his signature campaign issues during an upcoming debate against Biden in Washington, D.C.

"Right now, the absurdity and the dysfunctionality of the current health care system is becoming apparent to everybody," Sanders said. "Maybe this is an issue Joe Biden and I will be discussing on Sunday night."

Sanders railed against the costs of coronavirus testing, which he pegged at $1,300, and treatment (pegged at tens of thousands of dollars) as urgent examples of how the government isn't working for the working class. During a pandemic, he said, workers' "economic desperation" and poor access to health care puts everyone at risk.

"What this crisis is beginning to teach us is that we are only as safe as the least insured person in America," he said.

In addition to his calls for universal health care, Sanders said the outbreak illustrates a need for economic reform around paid leave and trade. He called for a national paid family and medical leave program and criticized trade deals that he said left the United States reliant upon other countries for critical health supplies.

Shortly after Sanders spoke, President Donald Trump officially declared a national emergency and said he was making $50 billion available to states.
Prev
Next