Weinberger: 'People Should Expect That There Will Be Further Changes' | Off Message

Weinberger: 'People Should Expect That There Will Be Further Changes' 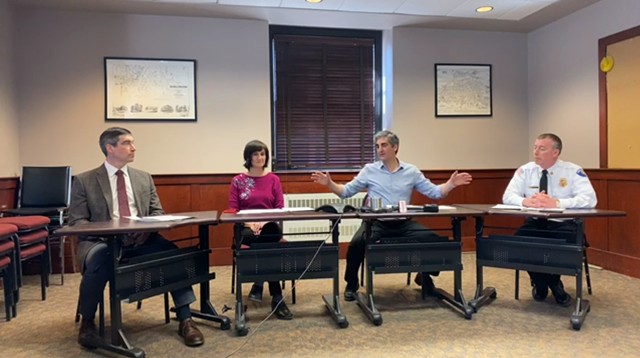 During a virtual town hall meeting Sunday afternoon, Burlington Mayor Miro Weinberger delivered a clear message: What's taken for normal in the Queen City will change during the coronavirus crisis that has gripped the globe.

"Many things that we expect as part of our daily lives are likely to change," Weinberger said. The session was streamed live on Facebook and conducted via conference call.

Burlington has not yet mandated closing bars or restaurants — as other cities and states have done in recent days — but the move is not out of the question, the mayor said.

"Even though the numbers appear to be quite low right now, I'm gonna have
a pretty low threshold in terms of triggering further action that would do what we can, as a local government, to ensure social distancing," Weinberger said. "People should expect that there will be further changes in the community as this week unfolds."

Vermont currently has eight confirmed cases of COVID-19, including two in Chittenden County. Many Burlington businesses have closed and postponed events since the Vermont Department of Health announced the state's first cases last week.

Vermont Announces More Coronavirus Cases
By Colin Flanders
Off Message
Weinberger said the city has limited funds to help local businesses whose customers are heeding medical advice and staying home. The city is waiting to see how it can take advantage of federal relief funds, the details of which are still being negotiated in Washington, the mayor said.

"This is something that the city's focused on," he said. The city is also reviewing various deadlines and fees that might be adjusted, he said.

Green Mountain Power on Sunday announced it would temporarily suspend "collections-related activities ... to lessen any financial hardship the COVID-19 pandemic may have on our customers" through April.

The city may also curtail its operations in the comings days. Weinberger said it's likely that the city will close some public buildings this week and suspend all "nonessential city services." The mayor said he would deploy these nonessential staff to assist the Burlington School District with distributing meals to families in need.

The city is also collaborating with organizations that help senior citizens, who are at greater risk if they contract the virus, and will be listing volunteer opportunities on the city's website.

City staffers are also researching how to facilitate city council and commission meetings online. The city council meets next on March 23.

Speaking with optimism, the mayor called on Burlingtonians to pull together and take actions that don't endanger their health or others'.

"If we take personal responsibility for each other, we will have a very different outcome here in Burlington than we are seeing elsewhere," Weinberger said. "This kind of community engagement and action is something we excel at here, and I have full confidence that we will come together as needed to meet this challenge in the days ahead."
Prev
Next