Leaders of the Vermont House and Senate on Thursday instructed committee chairs to come up with potential legislative actions to help the state grapple with the spread of coronavirus.

House Speaker Mitzi Johnson (D-South Hero) and Senate President Pro Tempore Tim Ashe (D/P-Chittenden) said they may seek to fast-track such measures, which could include additional funding for state services and support for residents and businesses.

The Statehouse remains open for the time being, but both Johnson and Ashe acknowledged the possibility that the legislature may soon have to suspend its operations or employ technology to continue its work in an unconventional fashion. Both said they are leaning on the Vermont Department of Health for guidance on whether to change course.

"Our public health officials at this time have not encouraged us to close the Statehouse, but we know that that could be something that is imminent, and we're trying to prepare for that eventuality," Ashe said Thursday afternoon in a Facebook Live address from his Statehouse office.

"There are still very important pieces of work that we need to do for Vermonters," Johnson told reporters. "And with things still relatively contained in Vermont, it is safer to get that work done now, as much as we can, given the trajectory we've seen in other places."

The Joint Rules Committee, a bipartisan group of House and Senate leaders, has been meeting daily to address the coronavirus threat in the Statehouse. The committee voted late Wednesday to cancel all "non-essential" gatherings in the building through March 31. Such events include press conferences held by outside groups, school visits and coffee hours for members of the public.

Joint Rules previously directed committee staff to ask witnesses to review the Department of Health's coronavirus risk questionnaire and to avoid the Statehouse if they are exhibiting any potential symptoms. Witnesses have the opportunity to testify by phone.

According to Johnson, the legislature's information technology staffers are exploring how committees could employ video technology to take testimony remotely. She said it was possible the legislature could adjourn temporarily in order to assess the situation, but it would need to reconvene in order to sign off on must-pass bills. "We don't have the option of not passing a budget," she said.

On Thursday morning, Johnson convened an emergency meeting of House committee chairs and her leadership team to brainstorm possible state responses to the spread of the disease.

“What are some of the legislative packages that we could put together to help support Vermonters through a COVID-19 outbreak?" she asked. "Some of them may require money. They may require interaction [with] or waivers from the federal government and whatnot, but I’d love to just toss some ideas on the table."

Members of the group raised a variety of concerns and ideas, including:

Johnson encouraged her committee chairs to focus on measures that could move quickly to the House floor, potentially as amendments to other bills.

"These things are on faster timelines and we're a little more command-and-control rather than 'let's form a task force,'" she said. "So you have blanket authority to get stuff drafted, get it ready to go." 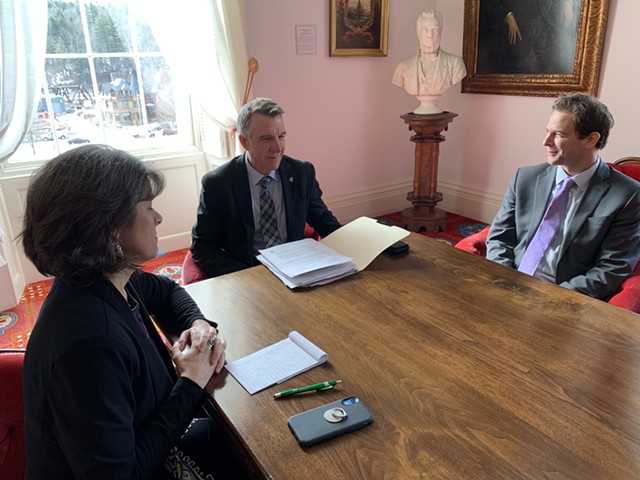 Ashe said that he had given his committee chairs similar instructions to consider actions that could "help soften the blow" of coronavirus in Vermont.

He and Johnson met Thursday afternoon with Gov. Phil Scott to discuss their efforts. Before the meeting, which was held behind closed doors in the governor's ceremonial office, Scott said that the executive branch did not need anything immediately from the legislative branch.

"But as I told them the other day, we want to make sure that we're in communication with them, and if there's anything that we do need they'll be the first to know so that we can make sure that we have their support," Scott said.

The Joint Rules Committee reconvened late Thursday afternoon, though it pushed off any decisions.

Atop its to-do list: figuring out how long a potential adjournment would last, and who would be allowed in the Statehouse until then. Most members seemed open to the idea of a week, with the option to extend it further — a flexible timeframe that would allow them to quickly return and act if needed.

As for limiting foot traffic, Sen. Joe Benning (R-Caledonia) suggested admitting only "essential" personnel, though it took only a few minutes to illustrate how difficult a line that is to draw in the Statehouse. Committee rooms are often filled with more citizens, lobbyists and reporters than lawmakers.