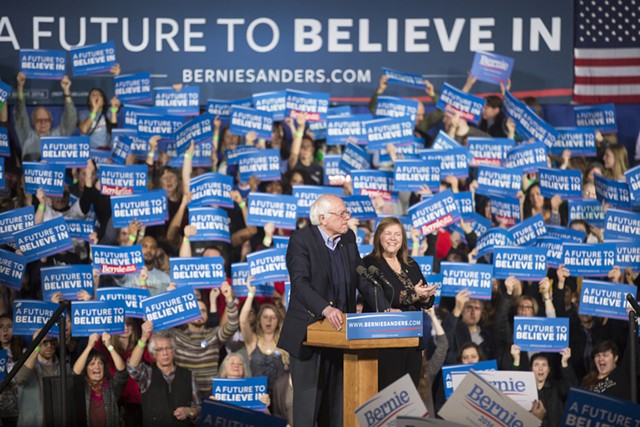 Sen. Bernie Sanders (I-Vt.) is coming home for the biggest day yet in his bid for the Democratic presidential nomination.

Sanders' campaign is planning a rally next Tuesday, March 3, at the Champlain Valley Exposition in Essex Junction, according to two town officials and a third source with direct knowledge of the plans. Campaign spokesperson Sarah Ford later confirmed it.

The rally would come as results arrive from the 14 states that vote on Super Tuesday. With roughly a third of the delegates to the Democratic National Convention on the line, a solid showing by Sanders could solidify his grasp on the nomination.

Planning is well under way, town officials said Tuesday. Lt. Robert Kissinger of the Essex Police Department said his agency is in discussions with the Expo over logistics, though "nothing has been finalized." According to Town Clerk Susan McNamara-Hill, Halvorson's Upstreet Cafe has requested a liquor permit for a "Bernie Sanders rally" next Tuesday at the Expo.

The campaign later announced details of the event: Doors open at 5:30 and the program begins at 7:30. Entry is on a first come, first served basis. Those interested in attending can RSVP here.

During his 2016 presidential race, Sanders held a Super Tuesday rally at the same location. Some 4,000 people attended that event, which featured speeches from Vermont politicians and music from Ben Folds and local artists.


Sanders has held just one other public campaign event in Vermont since joining the 2020 race: a Memorial Day Weekend rally in Montpelier last May.
Prev
Next