At Homecoming Rally in Montpelier, Bernie Sanders Thanks Vermont | Off Message

At Homecoming Rally in Montpelier, Bernie Sanders Thanks Vermont 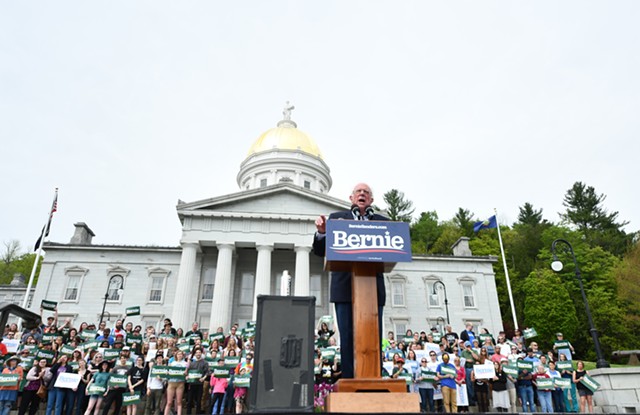 Three months into his campaign for the presidency, Sen. Bernie Sanders (I-Vt.) returned to Vermont on Saturday to address his most loyal supporters — and ask for their votes once more.

At a rally on the Statehouse lawn, Sanders thanked "the people of the state of Vermont, who have given me an opportunity that, when I was a kid, I never would've dreamed of in a million years." Serving as mayor of Burlington and then in the U.S. House and Senate had been "the honor of my life," he said, "and I thank you all." Sanders used his Montpelier homecoming to hail "the history of our small but proud state," asserting that it had "held its head high in the struggle for human freedom and justice." He also used it to highlight his own accomplishments in Vermont: helping to establish the Burlington Community Land Trust, build a network of community health centers and improve care for veterans.

"And now, as we assemble today here in front of our beautiful state capitol in this pivotal and unprecedented moment in American history," he said, "I am here today to ask for your support to help me win the Democratic nomination." 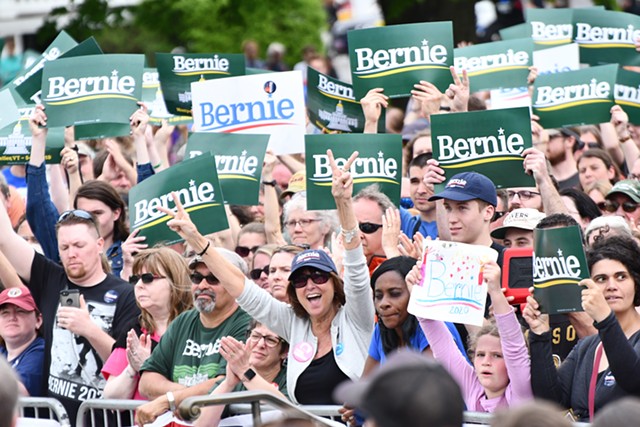 Though the crowd of 3,000 people did not match the 5,000 who turned out for Sanders' 2016 campaign kickoff in Burlington's Waterfront Park, there was plenty of enthusiasm to go around.

"Welcome to Bernie country!" bellowed U.S. Rep. Peter Welch (D-Vt.) as he warmed up the audience.

Joining Welch in introducing Sanders were a number of other high-profile supporters, including civil rights activist Shaun King, ice cream mogul Ben Cohen and singer-songwriter Brandi Carlile, who performed several songs and praised the senator as "a good man and a true altruist and a person who's started a revolution in this country that I can get behind."

Ryegate dairy farmer Jenny Nelson, who worked for Sanders for 18 years, recalled his curiosity about her industry, attributing it to a desire to understand "what the common person is thinking."

"Bernie's too big for Vermont," Nelson said. "I told him that. I said, 'You just wait. They're going to catch up to you, Bernie, and then you're going to be able to get something done.' I think we're there."

The praise wasn't universal. Soon after Sanders began his remarks, a plane appeared in the skies above the Statehouse pulling a banner that read, "#socialismkills @newsdoneright." It appeared to be the work of Republican agitators Bradford Broyles and Len Britton, who produce satirical videos for an outfit called News Done Right.

From the other side of the political spectrum, liberal activists who oppose the basing of F-35 fighter planes at the Vermont Air National Guard base in South Burlington held banners and distributed leaflets criticizing Sanders for supporting the plan. Among them was Angela Manno of Burlington, who volunteered for Sanders' 2016 campaign and called herself "crushed" by his support for the F-35 basing.

"I support Bernie, but I can't vote for him until he reverses his position," she said. Though most of Sanders' speech Saturday covered familiar ground, the senator mounted a new, vigorous defense of his opposition to foreign wars — apparently in response to a recent story in the New York Times and an interview on NBC's "Meet the Press."

"Recently I have been attacked in the media because of my views, actions and votes on foreign policy issues, so let me be as clear as I can be," Sanders said. As a young man, he continued, he marched against the Vietnam War, which "ravaged" his generation. "I make no apologies for having opposed that war."

The senator went on to note that he had led opposition in the U.S. House to the war in Iraq, was seeking to end U.S. involvement in Yemen's civil war and would oppose military confrontation with Iran.

"So I make no apologies for trying to do everything that I can to make sure that this country does not get into another war in the Middle East," he concluded. 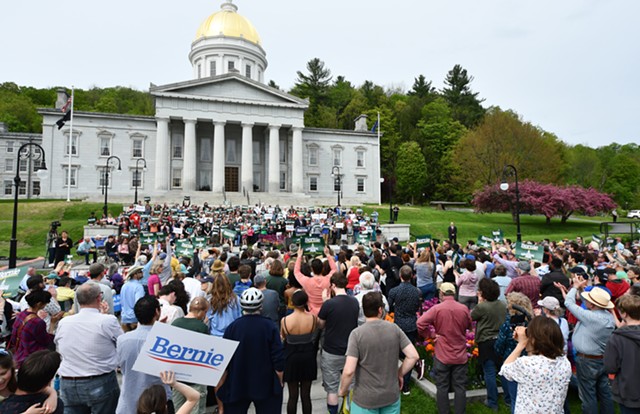 Sanders also previewed his planned appearance next month at Walmart's shareholder meeting in Bentonville, Ark. Employees of the retail giant invited him.

"Let me tell you what I will tell them," he said, referring to the heirs of Walmart founder Sam Walton, who still control a sizable portion of the company. "My message to the Walton family will be: Pay your workers a living wage, 15 bucks an hour. We do not want to continue providing corporate welfare for the richest family in America."

Sanders' speech was mostly serious, but he allowed himself a little fun when he joked that his entire Montpelier audience would "come to my inauguration" in January 2021. The crowd responded by chanting his name.

"Alright," he said. "We need a lot of buses to get to Washington. You all ready to come?" 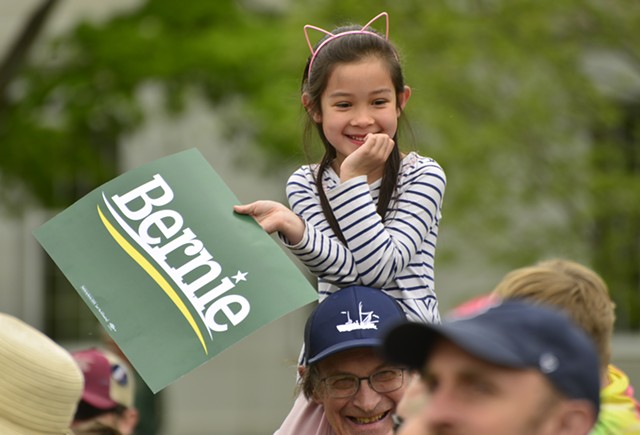 Saturday’s rally was well attended by Sanders alumni and veterans of Vermont’s progressive movement. A number of state legislators occupied a VIP section in front, including Sen. Anthony Pollina (P/D-Washington).

“To watch him develop over the years into a nationwide spokesman has been fascinating,” said Pollina, who once served as Sanders’ state director. “But it’s also been kind of inspiring to think that somebody from a small state like Vermont could actually have a voice that’s that loud.”

After the rally, Brookline, Mass., resident Anne Burns said that she found Sanders’ address “fantastic, absolutely wonderful.” She was particularly struck by how consistent his message has been over the years.

“He hasn’t changed,” said Burns, who owns a second home in Vermont and spends weekends in the state. “A lot of the things that the other candidates are copying are what Bernie said for many years. He’s worked for people all along and he hasn’t stopped and he won’t stop.”

Montpelier resident Meg Kuhner said that she had “always been a Sanders supporter.” But recently, she said, “I keep hearing people kind of falling away — maybe ‘not Bernie this time.’”

But Saturday’s rally reinforced her belief that Sanders should be the Democratic nominee.

“I am now going to use his language,” she said. “I am unapologetically supporting Bernie, and I have reason to hope that it’s going to actually happen.”
Prev
Next