March 03, 2020
Sen. Bernie Sanders (I-Vt.) is scheduled to soon join thousands of supporters in Essex Junction for a Super Tuesday rally at the Champlain Valley Exposition. Polls close at 7 p.m. in Vermont and some of the other 14 states voting on the biggest day yet in the Democratic presidential primary.
Dozens of Sanders supporters were lined up outside the Expo around 4 p.m., more than an hour before doors opened.

Reporters Colin Flanders and Paul Heintz are at the rally. Follow here for updates and for results from voting around the country:
9 p.m.: And here’s Vermont ⁦Lt. Gov. David Zuckerman, who hopes to ride⁦ Sanders' popularity to the governor’s office this fall.

7:19 p.m.: Dierdra Michelle, 54, and Bill Henshaw, 67, said they felt compelled to show up tonight to support Sanders because they don't believe he's getting a fair shake from the Democratic establishment.

Dierdra said she will support whomever is the nominee. But she's voting for Sanders because he, unlike Biden, will create a more equitable future for her grandchildren, she said. "Why I'm here and why I vote for Bernie is not for me. It's for those who follow me."
7 p.m.: The Associated Press has called the Virginia primary for former vice president Joe Biden. The New York Times has called Vermont for Sanders.
6:24 p.m.: On the timing side, the rally is expected to begin around 7:30 p.m., with Sanders taking the stage around 9 p.m., according to the campaign itinerary. Of course, that could always change as results start rolling in.
6:16 p.m.: Several statewide politicians are scheduled to speak tonight, including Attorney General T.J. Donovan, Treasurer Beth Pearce and Lt. Gov. David Zuckerman. Rep. Peter Welch (D-Vt.), meanwhile, will speak in a video message, per a campaign itinerary.


Other speakers include Alison Nihart, Rights & Democracy Vermont cochair, and Burlington City Councilor Ali Dieng (D/P-Ward 7), who's running unopposed for reelection today.
6:05 p.m.: Quickly filling up in here now with about an hour left until polls close in several states, including Vermont. 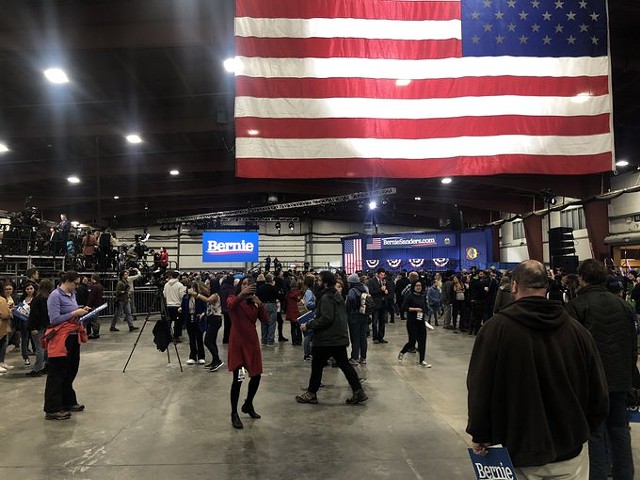 5:45 p.m.:  People are slowly trickling in now, including a few who are not super pleased that they couldn’t bring in outside food. “My organic nuts!” said one exasperated man.