Tim Ashe to Run for Lieutenant Governor of Vermont | Off Message

Tim Ashe to Run for Lieutenant Governor of Vermont 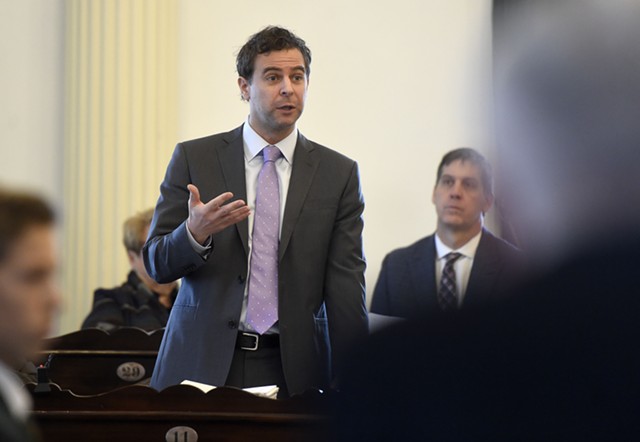 “My plan is to run for lieutenant governor,” he told Seven Days. “It’s the right time for me to take on a different challenge and take some of my skills and bring them to [a] statewide approach to these issues.”

The news comes as the incumbent lieutenant governor, Progressive/Democrat David Zuckerman, prepares to vacate the position to run for governor. Zuckerman has said publicly only that he will announce his own plans next week, but VTDigger.org reported Tuesday and Seven Days later confirmed that he expects to challenge Republican Gov. Phil Scott.

Ashe informed colleagues of his plans at a meeting of Senate committee chairs Wednesday morning. He told them he intends to continue leading the chamber until the close of the legislative session.

Ashe said his candidacy is contingent upon Zuckerman moving on from the job. “I would not be running if his decision was to stay put,” the pro tem said.

The 43-year-old affordable housing consultant from Burlington was first elected to the Vermont Senate in 2008 and has led the body for the past three years. He previously served on the Burlington City Council and ran an unsuccessful campaign for mayor of the Queen City in 2011.

Vermont’s lieutenant governor has few constitutional responsibilities, other than presiding over the Senate and succeeding a governor if he or she can no longer serve. Asked why he would forfeit his current influence for a largely ceremonial role, Ashe said that it would “free [him] from the day-to-day management of the Senate” and allow him to address the state’s greatest challenges.

Ashe said he would focus on “revitalizing small communities, trying to lift more people out of poverty” and fighting climate change.

Full Disclosure: How Burlington Prog Tim Ashe Came to Power in the Vermont Senate
By Paul Heintz
Politics
Though he's never sought statewide office, Ashe has been the top vote-getter in the state's most populous Senate district for the past two election cycles. As leader of the Senate, he has the opportunity to steer its policy agenda as he seeks higher office and to stay in the public eye throughout the legislative session.

Ashe cited as his key accomplishments helping to make “even more progressive one of the most progressive tax codes in the country,” advancing an abortion-rights constitutional amendment and enacting “the first significant gun safety legislation in perhaps Vermont’s history.”

But Ashe's record as pro tem could also weigh down his lieutenant gubernatorial campaign. The 2019 legislative session ended with a spectacular blowup between Ashe and House Speaker Mitzi Johnson (D-South Hero) that resulted in neither of their policy priorities — a $15 minimum wage and paid family leave, respectively — reaching Scott's desk.

“Both bills at the end of the session were awfully close. And, you know, I’m sure I made missteps, as did others, that kept us from getting it quite to the finish line,” Ashe said. “But, you know, we’re here in January picking up where we left off. My expectation is that both will be to the governor shortly, and I’ll be very proud to stand behind the bills that he gets, and hopefully he’ll sign them.”

Ashe is not the first candidate to declare for lieutenant governor and he’s unlikely to be the last. Meg Hansen, who has led Vermonters for Health Care Freedom, announced last month that she would seek the Republican nomination.

Ashe’s seatmate, Sen. Debbie Ingram (D-Chittenden), said she is “leaning towards” entering the race and would announce her decision next week. “I need to have some conversations with some people in my life before I absolutely jump in,” she said.

An ordained minister in the United Church of Christ and executive director of Vermont Interfaith Action, Ingram was first elected to the Senate in 2016. The Williston resident previously served on her town’s selectboard.

“I’m excited about it because I think my skill set and the opportunities of the position are a really good match,” she said. “There aren’t a whole lot of designated duties of the lieutenant governor, but the position offers a platform to connect people.”

Former House Speaker Shap Smith, a Democrat from Morrisville, said Wednesday that he was “giving consideration” to a run for lieutenant governor and would make a decision “within the week.”

Smith ran for lieutenant governor in 2016 and lost to Zuckerman in a three-way primary for the Democratic nomination. “I’m thinking about whether it’s the right time, given my wife, kids and job,” he said of a 2020 bid.

“I think that there are issues like rural broadband and recruiting young and old people to Vermont and infrastructure that I care a great deal about and that I think I could add a strong voice to those issues as somebody who lives and raises a family in rural Vermont,” Smith added.

The third candidate in the 2016 Democratic primary for lieutenant governor, former Burlington state representative Kesha Ram, said Wednesday that she had not ruled out another run but hadn’t had much time to consider it. “This is the first week of [the legislative] session and I didn’t expect all of these pieces to move so quickly,” she said.

Ram, now a social and environmental equity consultant, said she had a “rich personal and professional life” to consider. “No matter who I talk to in the state, it always feels like people are wondering what I’m doing next, but I haven’t had a chance to have any concrete conversations,” she said.

Rep. Sarah Copeland Hanzas (D-Bradford), a former House majority leader and the current chair of its Government Operations Committee, said she, too, is considering a run for LG.

“There’s a lot of potential for work from the lieutenant governor’s office to engage with Vermonters around how to meet our climate goals,” said Copeland Hanzas, who also co-chairs the Climate Solutions Caucus. “My consideration of whether I run or not really depends on whether I think it’s a net benefit to the commitments I made to bring Vermont around on its climate goals.”

Molly Gray, a prosecutor with the Attorney General's Office, said she intends to run for lieutenant governor, though she said she was not making a formal announcement just yet. The Burlington resident, who graduated from Vermont Law School in 2014, has not previously run for public office.

“I want to be part of the new generation of bold Vermont leadership, and I just feel like now is the time and I’m ready,” she said.

On the Republican side of the aisle, 2018 lieutenant gubernatorial nominee Don Turner said that his phone had been “blowing up” since news of Zuckerman’s plans broke. The former House minority leader said that he would “definitely” consider another run, though he would likely not make up his mind soon.

“I don’t really see a big hurry,” said Turner, who now serves as town manager in Milton. “I want to make sure there’s a path to victory before I go jumping into the race.”

Sen. Corey Parent (R-Franklin) said he planned to “have conversations with other potential candidates to make sure there is a viable [GOP] candidate that can articulate a platform that will help address the many issues facing Vermonters.”

But, Parent added, “I don’t think the odds are good that I would enter the race for LG.”

Several prominent pols are ruling it out altogether.

Johnson, the House speaker, said she was focused on her current job. “Tim has the privilege of [overseeing] 30 members,” she said of Ashe. “I have 150 to manage, so I really am focused on all of the work we have to do within the legislative branch for Vermonters. That’s always been my gig — to work on the job that I’m in.”

Burlington Mayor Miro Weinberger is also out of the running. “I’m totally focused on the City of Burlington and the job that the people of Burlington elected me to do,” he said.

Senate Majority Leader Becca Balint (D-Windham), who is often described as a future candidate for statewide office, said Wednesday that she would not seek the job. “I’m very committed to my work in the Senate,” she said. “There’s important work I still want to get done there.”

Similarly, Sen. Philip Baruth (D/P-Chittenden) said he would not run for lieutenant governor and would instead support Ashe. “I’m 100 percent behind Tim,” he said. “I think he’s fantastically qualified and he’s done an amazing job with the Senate.”

Ashe’s move is likely to set off a quiet campaign to replace him as pro tem, though a formal vote on a successor would likely not take place until the start of the next biennium, in January 2021. Balint and Baruth both said Wednesday that they were interested in taking the reins.

“Senators are encouraging me to run for pro tem and I’m certainly going to think carefully about that,” Balint said. “But of course I have to win reelection first, and we’re all focused on our work this session.”

Said Baruth, “I don’t want to be coy. It’s a job I’ve thought about and I would like someday to do, so if this turned out to be that opportunity, with the Senate’s blessing, then absolutely.”

If Ashe and Ingram seek higher office and give up their current positions, there would be two open seats in Chittenden County’s six-member delegation to the Senate. Rep. Dylan Giambatista (D-Essex), a former chief of staff to Smith, said he was weighing a run for one of those slots.

"For years I've heard from community members who have said it would be great to have a senator to represent the community of Essex Junction in the Chittenden delegation,” Giambatista said. “I'm actively exploring that as an opportunity, and I'm having a lot of conversations. I hope to make a decision very quickly."