He was perched on a chair outside House Speaker Mitzi Johnson's (D-South Hero) Statehouse office, waiting for a meeting that would settle a standoff between the two leaders — and determine the fate of two key Democratic bills.

Maybe he was flustered by the gaggle of reporters around him — or maybe he knew he was on a fool's errand.

Frustrated by the lack of progress on negotiations to increase Vermont's minimum wage and create a paid family leave program, Johnson had given Ashe an ultimatum a few hours earlier.

In a 10:25 a.m. letter, which she released to the media shortly after delivering it to Ashe as he presided over the Senate, Johnson presented five options to resolve the House-Senate standoff — and gave the pro tem a noon deadline to accept one of them.

If he could not agree to one of the packages, Johnson wrote, he should send back the remaining budget and revenue bills so they could close out the legislative session.

"It's time to wrap up and go home," Johnson wrote.

When Ashe arrived at her office two hours after the deadline, Johnson informed him — despite his stated willingness to accept one of the options — that she was done playing games. She had decided to adjourn the House for the year.

"I asked her to reconsider," Ashe recalled Monday. "She said there was no time to work out a deal."

With that, the first year of Vermont's 2019-2020 legislative biennium effectively came to a dramatic, chaotic and confusing end. "Very bizarre" is how Republican Gov. Phil Scott put it.

The collapse of negotiations and abrupt adjournment dashed Democrats' hopes of securing their top two policy priorities, despite controlling more than two-thirds of both chambers. That's led some lawmakers to worry that the cause of the meltdown — strained relations between the House and Senate and their respective leaders — could have lasting implications for the legislative branch.

Every legislative session has its "squabbling," but this year was different, according to Sen. Chris Pearson (P/D-Chittenden).

"It's taken on a new layer that's troubling," he said. "People will debate about which side 'won,' but it's clear who lost: working families. They need a raise, and they need the security of paid family leave."

The session's final hours featured a strange series of parliamentary machinations as the House attempted to adjourn for the year, and the Senate sought to keep it from doing so. In a last-ditch effort to force the House back to the table, Ashe scheduled a Senate session for this Wednesday, May 29, but he later conceded that it was a lost cause — and that the Senate would join the House in adjourning until next January.

Though Johnson was the one to call it quits, many House members — Democrats and Republicans alike — blame Ashe and his Senate colleagues for failing to compromise. They were fed up with what Rep. Sam Young (D-Glover) referred to as the Senate's "pressure negotiation tactics," such as holding the paid leave bill hostage until the House approved the minimum wage increase.

"I think that Mitzi was right to pull the plug," Young said. "It's all about pushing something to the last moment to get what you want, and I just hate that."

Rep. Heidi Scheuermann (R-Stowe) opposed both bills, but she said she admired Johnson for standing up to Ashe. In previous years, the veteran Republican said, "some had the impression [Ashe] was really trying to push [Johnson] around a lot."

"She put her foot down — and I give her a lot of credit for that," Scheuermann said.

To at least one liberal activist, Rights & Democracy leader Jubilee McGill, the power plays by Statehouse insiders ultimately served nobody.

"It feels like egos really got in the way of progress this session," McGill said Friday afternoon as hopes faded that either bill would become law.

The Senate has long prioritized raising the minimum wage to $15 an hour, while the House has favored a family and medical leave program. Versions of both proposals secured approval in both chambers, but in recent weeks the House slowed the pace of the wage increase and the Senate watered down the paid leave program. 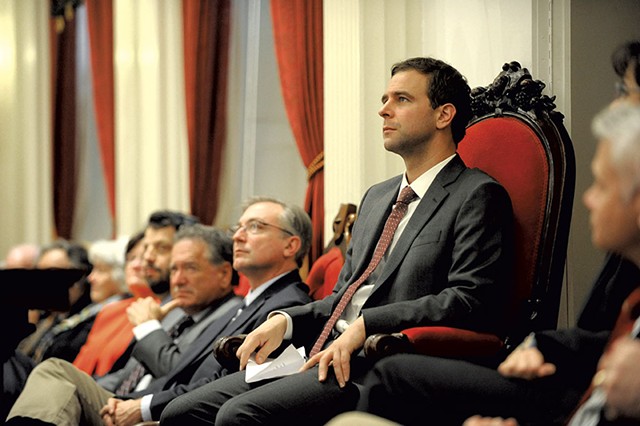 Scott, for his part, expressed skepticism about both initiatives, arguing that they were too expensive and could harm Vermont businesses. Though he never said whether he would veto either bill, many in the Statehouse believe he would have. He did, after all, veto similar initiatives last year.

Sen. Randy Brock (R-Franklin) said he had spoken to the governor in recent weeks about his position but couldn't get a clear answer.

"Never has he indicated what he would or would not do," Brock said. "I think the governor has been very good at keeping his mouth shut."

That kept Democrats guessing — and second-guessing one another.

By Friday afternoon, the legislature was already a week into overtime, at a cost of about $250,000. With Republicans unwilling to allow last-minute legislation to speed through the Statehouse, any deal would have forced lawmakers to return after the Memorial Day weekend.

"The idea of staying another week to get a couple of bills through that we know are going to be vetoed just seems kinda pointless to me, honestly," Young said.

The collapse of negotiations when a deal seemed so close deeply disappointed those most directly involved, according to Senate Majority Leader Becca Balint (D-Windham).

"After working so hard on both these important policies, it was just heartbreaking that we got neither," she said.

The hardest part for her, Balint said, was what she called a loss of trust. As she and others did a "postmortem" on the frenzied final week, Balint came to believe that the House might not have been negotiating in good faith. She noted that a lot of work had gone into the letter Johnson released Friday morning.

"That letter had to have been drafted already in some form while we were still in negotiations," Balint said. "So, that hurts."

According to Balint, the negotiating teams had struck a tentative deal last Thursday calling for the House to approve a bill boosting the minimum wage from $10.78 to $12.25 within two years. Meanwhile, the Senate would approve a paid leave bill that included voluntary, instead of mandatory, personal injury insurance, paid for by workers.

According to Rep. Tom Stevens (D-Waterbury), the House's negotiating team had agreed to allow temporary disability insurance to be voluntary for the first three years, phasing in a mandatory program following a report analyzing participation rates, costs and other factors. Senate leadership, however, balked at the disability component becoming mandatory, according to Stevens.

"They didn't view [disability insurance] as the heart of the bill, and we did," Stevens said.

Then on Friday morning, around 8 a.m., the Senate negotiating team met again and agreed to scale back the minimum wage increase to $12.20, Balint said.

The next thing senators knew, the speaker's letter was circulating on Twitter.

Such a public missive — rather than a private counteroffer — represented a "new dynamic" between the House and Senate, according to Balint.

"This was the kind of thing we were getting from the governor for the last two years, not from the other chamber," she said.

According to Johnson, the House "desperately" wanted to raise wages for Vermonters but was more concerned than the Senate about the impact that would have on rural businesses and Medicaid service providers. She said there were real unanswered questions about how a higher minimum wage would affect critical services for seniors in the state.

"I don't feel like those concerns were really heard or considered or listened to by the Senate," Johnson said.

The speaker denied she was concerned that her top priority, paid family leave, might get vetoed by the governor while minimum wage might not. She said she had no idea what Scott would sign.

"When I tried to open that conversation with him, with the pro tem sitting right there, [the governor] still wouldn't have the conversation," Johnson recalled.

Ashe, on the other hand, seemed convinced that Scott would allow a modest wage increase.

"I believe there is a strong chance that it can become law," Ashe said, though he admitted that he had no special insight into the governor's thought process.

At the beginning of the session, according to Balint, Democratic leaders in both chambers agreed that they should focus their energy on bills that would either be acceptable to the governor or could win enough votes to override a veto.

With that in mind, Balint thought Johnson should have thrown her weight behind the policy with the best chance of becoming law: a higher minimum wage, not paid family leave.

"At some point, you cut your losses," Balint said.

Decoupling the two measures could have posed a risk to House members who favored paid family leave, Balint conceded, because the Senate had shown comparatively little interest in the issue. But the majority leader argued that she and other senators would have continued to champion the initiative.

Since a bill cannot be reintroduced in the same biennium after being vetoed, Johnson concluded it made more sense to continue to build support, better understand Scott's concerns and revisit both issues in January.

"There is a strong majority of people in the House who want to raise the wage, and we'll find a way to do it," she predicted. "We just want to make sure there aren't any casualties along the way."

Clarification, May 29, 2019: A previous version of this story misstated when Ashe received Johnson's letter.