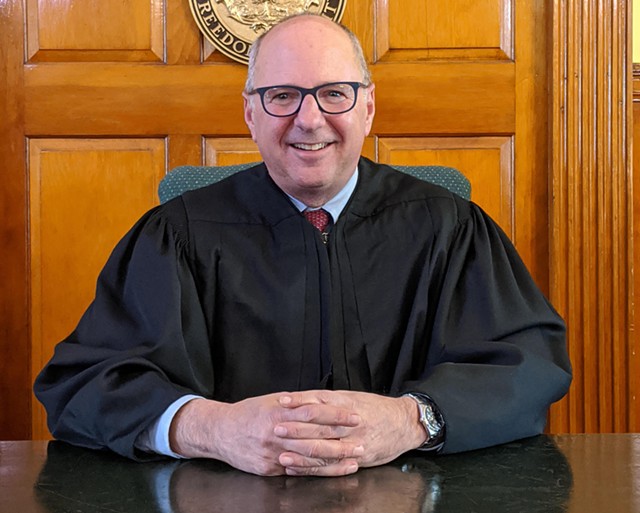 A superior court justice in Rutland for the last 20 years, Cohen fills a vacancy created by the September 1 retirement of Justice Marilyn Skoglund, who departed after 22 years on the state’s highest court.

“Bill understands the needs of Vermonters as well as the challenges facing the judiciary and the justice system,” Scott said in a statement released Thursday morning. “Among a very strong candidate pool, Bill distinguished himself as someone with the right experience, temperament and character to serve the judiciary with excellence as an associate justice.”

In an interview, Cohen said he was “extremely happy” to be appointed but would also miss the close relationships he has built in Bennington, where he is the presiding judge.

He described himself as a moderate and his judicial philosophy as “to attempt as best I can to not judge out of fear or favor.”

He said his interview with Scott was less about his legal leanings or philosophy and more about his approach to the job.

“It was more about fairness, listening, treating people equally regardless of their circumstance,” Cohen said. “I think those were the things that were important to the governor in making his pick and I think he wanted someone who could reflect those goals.”

The appointment shifts the gender balance on the five-member court back to a majority male court, which has existed for all but the last two years of its long history.

Justice Served: Marilyn Skoglund to Retire From the Vermont Supreme Court
By Paul Heintz
Politics
Cohen joins Chief Justice Paul Reiber and associate justices Beth Robinson, Harold Eaton and Karen Carroll on the bench, reverting the court to a 3-2 male majority. The court became majority female for the first time in its history with Carroll’s appointment in 2017.

Scott selected Cohen from a list of seven names that the state’s Judicial Nominating Board deemed well qualified for the post. Three of those names were women, only one of whom is a sitting judge, according to Rebecca Kelley, Scott’s spokesperson. Nominees’ identities are confidential.

Scott has previously criticized the board for not sending him enough diverse candidates. But at a press conference Thursday, the governor said the board had “turned the corner.” He also noted that he had appointed two female judges to the Superior Court recently.

Citing Bias Complaints, Scott Demands New Judicial Nominees
By Kevin McCallum
Politics
The strong candidate field for the top court vacancy made the decision a difficult one, he said.

“At the end of the day, I had to pick the person that I thought had the background, the temperament and was connected enough to Vermont to do this position at this point in time,” Scott said.

Scott said Cohen is a humble person who is good at explaining things to the average Vermonter, traits he felt would serve him well on the court.

Therese Corsones, chief executive of the Vermont Bar Association, said she has worked with Cohen for years and thinks he is an excellent choice.

“He is very well known for his compassion and respect and patience for litigants and counsel and anyone appearing before him,” Corsones said.

She said Scott had made good on his pledge of increasing the number of women on the bench in the state, and said she was untroubled by the gender balance on the top court shifting back.

“I think it was justice Skoglund herself who said she wanted to see the best person appointed to the bench, irrespective of gender,” Corsones said.

Max Misch Loses Gun Law Challenge in Criminal Case
By Derek Brouwer
Off Message
Cohen grew up in Rutland and has degrees in environmental science and law from George Washington University and Vermont Law School. He practiced law as both a deputy state’s attorney and as a litigator in private practice before he was appointed a Superior Court judge in 1999. He is currently presiding as a judge in Bennington and Rutland counties.

Cohen has handled a number of high-profile criminal cases, including recent gun charges against Max Misch, a self-professed white nationalist. Misch is believed to be the first person charged in Vermont under the state’s new law restricting possession of high-capacity gun magazines.

In June, Cohen rejected Misch’s bid to get the charges dismissed by challenging the constitutionality of the law.

Scott will swear Cohen into office later this month.