Scott Pulls State-Owned Nazi Rifle Off the Market | Off Message 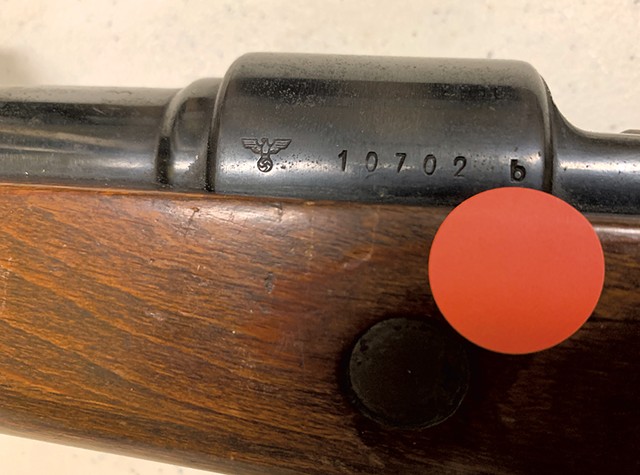 Gov. Phil Scott on Thursday directed the Vermont Department of Buildings and General Services to cancel the pending sale of a state-owned rifle bearing a Nazi emblem.

As Seven Days reported Wednesday, the department has in recent months been selling hundreds of seized and abandoned firearms to make room in police evidence rooms. Among the remaining weapons are two World War II-era 8mm Mauser K98 bolt-action rifles featuring the Nazi Reichsadler emblem — an eagle clutching a swastika. One of the two guns was up for bid when Seven Days' story went to press.

Though an April 2018 law mandated the sale of all the seized and abandoned firearms, the governor found that he had the discretion to choose when to sell them, according to Scott spokesperson Rebecca Kelley. "With that determination, the governor directed BGS to hold both weapons as we determine next steps," she said. "As any additional sales go forward, those two will not be included."

According to the buildings and general services website, the pending sale of the first gun has been "postponed."

Related How the State of Vermont Became a Firearms Dealer

How the State of Vermont Became a Firearms Dealer
By Paul Heintz
News
Kelley said the governor's office was trying to determine whether it had the authority to dispose of the weapons in another manner or if it would have to seek a legislative remedy when lawmakers return to Montpelier in January.

"The governor doesn't want the state promoting this kind of symbolism," Kelley said.
Prev
Next