Two fixtures of the Vermont media landscape are making major moves this summer they say will result in higher-quality television broadcasts for their viewers.

And Vermont PBS is making a similar leap in mid-August when staff decamp from their longtime home at Fort Ethan Allen for vibrant downtown Winooski.
In both cases, the station officials say the new digs will give them access to better production and broadcast capabilities.

In addition to the consolidation, the project allowed the station to expand cutting-edge digital video technologies and to position operations closer to the center of its sprawling coverage area, he said.

“Overseeing a project like this is really a once-in-a-career kind of opportunity,” Antoniotti said.

The NBC affiliate, which has transmitted from Plattsburgh for decades, covers a large area spanning three states and southern Canada. The counties with the highest viewership — Clinton County, N.Y.; Chittenden County, Vt.; and Grafton County, N.H. — are more than 150 miles apart.

“This was an ideal location to help us better serve the entire market,” Antoniotti said.

It’s been an adjustment for many of the Plattsburgh employees to make the switch to South Burlington. Some moved, others now commute. Relocating had been in the works for more than a year, and the new site brought the station's 90 employees closer to conveniences including food trucks, a fitness center and hiking trails.

The Plattsburgh office will continue to operate as a news bureau, but the Colchester bureau has closed. The station also has shuttered its White River Junction bureau and opened a new one just across the Connecticut River in Lebanon, N.H.

Vermont PBS has been based for 50 years at Fort Ethan Allen in Colchester in a single-story building constructed by the University of Vermont, which founded the public station in 1967 as Vermont Educational Television.

“The Fort” has served the station well but also posed challenges. This summer, temperatures in the building, which lacks air conditioning, reached 100 degrees during filming of shows like "Vermont This Week," Chrystie Heimert, the station’s vice president of marketing, said in a statement. Production had to be halted at times as fighter jets from the nearby Vermont Air National Guard base roared overheard.

The station is spending $1 million to outfit about 20,000 square feet of office space in the Vermont Student Assistance Corporation office building at 10 East Allen Street in downtown Winooski, just off the city's traffic circle.

Many of the station’s 46 employees will have offices on the second floor. The new facility will include a screening room, video editing suites and a soundproof studio in the basement, Heimert said.

“The new space allows us to be more visible, more accessible, and more flexible, evolving along with our changing community and media industry,” she said.
The station is planning an open house in the fall. 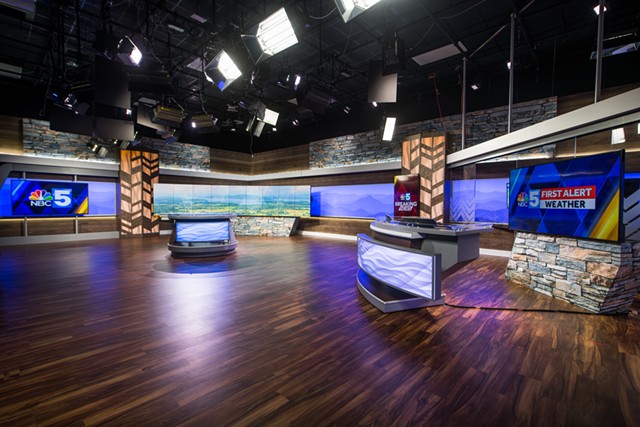