Not Reporting Election Meddling May Be 'the New Normal,' Mueller Tells Welch | Off Message

Not Reporting Election Meddling May Be 'the New Normal,' Mueller Tells Welch

Under friendly questioning from Rep. Peter Welch (D-Vt.), Mueller said he shared the representative's concern that future political campaign operatives may not feel compelled to report to federal authorities efforts by a “hostile foreign power” to influence U.S. elections.

“I hope that is not the new normal, but I fear it is,” Mueller said, an answer among the most notable that he gave during the closely watched hearing.

In that exchange and others, Welch, a former personal injury attorney, succeeded where some of his colleagues failed in getting Mueller to engage with the committee instead of deflecting and deferring, as he did much of the day.
Mueller initially gave halting answers to Welch's questions, which began several hours into his testimony. He struggled to recall the distinction between “conspiracy,” which is a legal term, and “collusion,” which is not.

Welch helped him out with a friendly reminder. He then led Mueller to confirm that just because he had not found enough evidence to prove a crime beyond a reasonable doubt, “that decision does not mean your investigation failed to turn up evidence of conspiracy.”

Citing these and other examples, Welch asked Mueller if “we’ve established a new normal from this past campaign that is going to apply to future campaigns” where campaign officials won’t feel compelled to report such efforts to the FBI or others.

Mueller then responded about his fear of the “new normal.”

Asked finally by Welch for advice about how Congress could protect the nation’s election system going forward, Mueller said better coordination between intelligence agencies was vital.

“The first line of defense, really, is the ability of the various agencies who have some piece of this to not only share information but share expertise, share targets, to use the full resources that we have to address this problem,” he said. 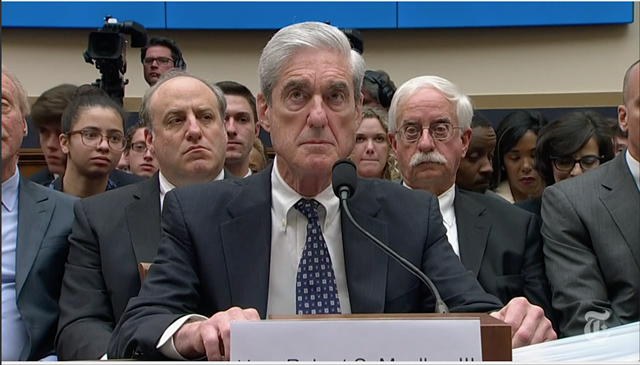