With Headquarters in D.C., Sanders Campaign Spends Little in Vermont | Off Message

With Headquarters in D.C., Sanders Campaign Spends Little in Vermont 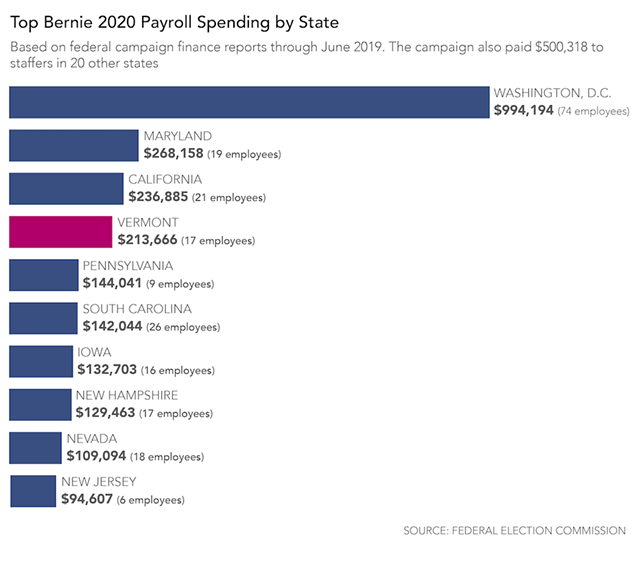 Not long after Sen. Bernie Sanders (I-Vt.) joined the 2020 presidential campaign in February, his senior adviser and longtime aide, Jeff Weaver, said that Sanders would be "colocating" his campaign headquarters in Vermont and Washington, D.C.

But according to a recent filing with the Federal Election Commission, very little of Sanders' campaign appears to be based in Vermont — and he hasn't spent much money in his home state.

A Seven Days analysis of the data found that just 17 of the 279 employees his campaign paid during the first half of the year lived in Vermont. Meanwhile, 101 lived in the Beltway region — including 74 people in D.C., 19 in Maryland and eight in Virginia.

Those figures likely undercount the disparity because they exclude compensation to campaign advisers who are paid as consultants rather than as traditional employees. Weaver, for example — a resident of Falls Church, Va. — earned $71,250 in consulting fees during the first five months of the campaign. Similarly, Sanders' chief fundraisers, Tim Tagaris and Robin Curran, appear to have been paid through their firm, Arlington, Va.-based Aisle 518 Strategies, which earned nearly $3.2 million during that period.

When Sanders first ran for president in 2016, he based his campaign in downtown Burlington. That cycle, according to FEC data, he spent more on employees living in Vermont than those living anywhere other than California. Sanders' Green Mountain State payroll throughout that campaign totaled $1.3 million — or 8.9 percent of his overall payroll.

The Sanders campaign did not respond to multiple requests for comment.

Since launching his 2020 bid, Sanders's campaign has spent more than $18.8 million on all expenses. Of that, close to $1.4 million, or 7.3 percent of his total spending, has gone to Vermont businesses and employees. That compares with nearly $6.3 million, or 33.3 percent, that's gone to Beltway-based entities.

Some Vermont businesses, however, have done quite well this cycle. Nearly 72 percent of Sanders' spending in the state so far has gone to just four businesses:

Mary Martelle, who co-owns First Step Print Shop with her husband, Robert, said that Vermonters should be "pretty happy" that Sanders works with her business and others in the state.

"This is all stuff that he could be doing in Washington, so I have a lot of respect," she said. "He's loyal. He's definitely loyal to Vermont."

First Step, a union shop, has worked with Sanders for 15 years, Martelle said, including during his 2016 presidential race. According to Martelle, Sanders has instructed his staff to direct business to First Step and has even called the shop himself.

"He just wanted to know when things are going to get done," she said. "And we were like, 'We're on it!'"
Prev
Next