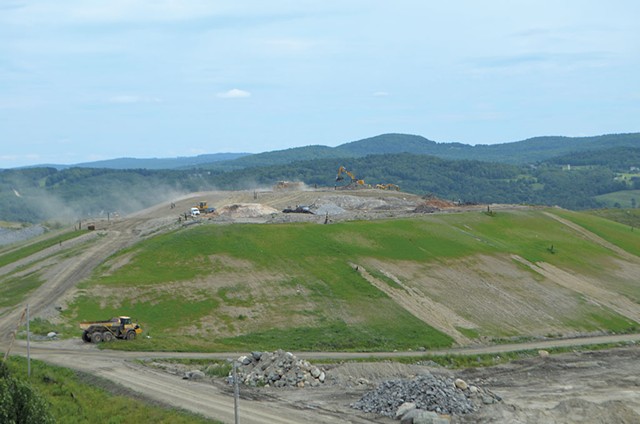 A proposed 51-acre expansion of Vermont's only active landfill won an Act 250 permit Tuesday, putting the project one step closer to construction.

The permit allows the vast dump in Coventry near the Canadian border to operate for another nine years, until 2028.

But an appeal of a different permit from the Vermont Agency of Natural Resources that is also required for the expansion is still pending. Until that's resolved, the expansion cannot go forward.

Still, the decision appeared to be a victory for Casella Waste Systems, the Rutland-based trash hauler and landfill operator that owns the 1,000-acre Coventry facility and operates it under a subsidiary called New England Waste Services of Vermont.

Two Men's Trash: How Casella Waste Systems Converted Garbage Into a Sprawling Empire
By Molly Walsh
Business
Critics raised a number of concerns, including tainted garbage water leaking into the ground and into nearby Lake Memphremagog, a drinking water source for Vermonters and Canadians.

However, the District 7 Environmental Commission found that air emissions, dust, noise and odors would not be substantially different from current levels under the expansion. The commission also found that the project met water quality standards.

"The Applicant has garnered support from the Town of Coventry and has acquired an array of permits from the Agency of Natural Resources. The result of this process is a well-designed landfill expansion that minimizes potential for impacts to human health and the environment," the decision stated.

Related Should Vermont’s Only Landfill Get Bigger?

Should Vermont’s Only Landfill Get Bigger?
By Molly Walsh
Environment
But in an apparent nod to expansion opponents, the commission ruled that the landfill can no longer dispose of liquid dump runoff, known as leachate, at the Newport Wastewater Treatment Facility.

The commission cited concern over potentially toxic chemicals known as PFAS — which come from a range of landfilled consumer products including electronics, nonstick cookware, carpet and food packaging — getting into the drinking water supply.

"Due to the risk to the water quality of Lake Memphremagog — a drinking water supply for thousands of Canadians — caused by discharge of PFAS chemicals into the Lake via the Newport WWTF, the Commission will, by permit condition, prohibit disposal of leachate generated at the Facility, at the Newport WWTF," the decision stated.

An independent third-party company would be required to do testing on odors under the expansion permit, which noted that there were 62 odor-related complaints between 2010 and January 2019.

Without the expansion permit, the landfill would have likely run out of room by 2023.

"We’re happy to have received the permit, of course, and are reviewing it," Joseph Fusco, a Casella vice president and media spokesperson, told Seven Days Wednesday in an email. "At this point, not having completely reviewed it, we really don’t have any specific comments — other than being happy to have reached this point in the process."

Opponents of the expansion, who go by the moniker Don't Undermine Memphremagog's Purity (DUMP), did not immediately respond to a request for comment.

See the permit below: