Developer: CityPlace Burlington Project Will Be Redesigned | Off Message 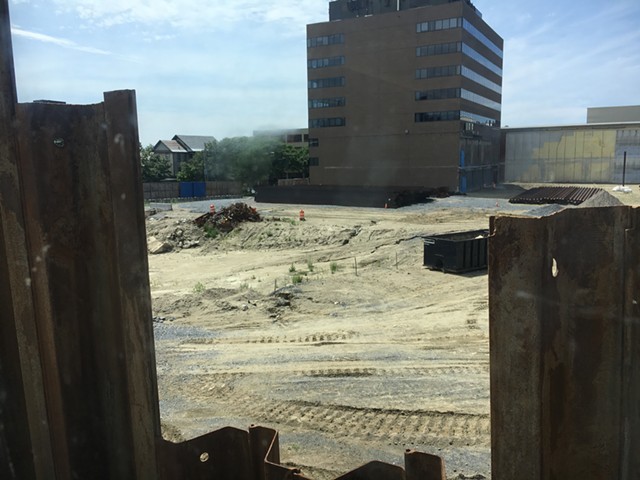 The developer of one of the most ambitious building plans in Burlington history confirmed Friday the project may be a bit too ambitious.

Brookfield Asset Management, majority owner of CityPlace Burlington, released a statement confirming the obvious, that the 14-story downtown project is on hold. Brookfield also said that the “scope, scale, and the timing” of construction may change.

The delay is the latest setback for a polarizing project to transform the ailing Burlington Town Center mall property downtown into a vibrant mixture of housing, office and retail space. First approved in 2016, the repeated delays have strained relations between the developers and city leaders and frayed nerves of downtown residents and business owners alike.

Brookfield's statement didn’t detail why it was going back to the drawing board, citing only ongoing litigation and “the complexities of the project and associated cost considerations.”

Mayor Miro Weinberger said in a statement of his own that he hopes the redesign “would address some of the size and scale criticisms” that have dogged the project. Activists have long claimed the planned 14-story structure, which would be the tallest building in Vermont, would be out of scale for Burlington.

Brookfield said it nevertheless “remained committed to delivering a transformative project to the City of Burlington.”

“Over the next several months, we will be working collaboratively with the administration and stakeholders to refine our development plan to ensure we have a design that is consistent with the community’s values and goals,” the statement read.

The public explanation follows the private update that the Burlington City Council received Monday about the redevelopment effort. An architect working project told two city officials within earshot of reporters that the project would be redesigned.

Weinberger said at the time he would have “a lot more to say” about the status of the project. He released a lengthy statement Friday saying he was “frustrated and disappointed” by the latest delay but felt the city should continue working with the Brookfield to make a project a reality.

“Brookfield’s statement today and recent actions demonstrate that there remains a potentially very good path forward with them to transform this long-troubled site into a vibrant, mixed-use neighborhood,” Weinberger said.

He said he was pleased Brookfield was now fully in control of the project. Mall owner Don Sinex, a minority partner in CityPlace, has been accused of misleading city officials about the construction timeline.

Weinberger described Brookfield as an “experienced and very well-capitalized company” whose team has been well-resourced, predictable, and responsive since they took the project lead in January.” He said be believes the company is investing in “design and other necessary pre-construction activities.”

“I am hopeful that Brookfield’s current review and design changes ultimately will lead to a better project for Burlington,” Weinberger said.

Burlington City Councilor Adam Roof (I-Ward 8) said he expected the $250 million project would need to be redesigned following the developer’s 2018 purchase of the former Macy’s building that was adjacent to the mall. That additional space may create an opportunity to accomplish some of the same project goals with less height, such as building 10 or 12 stories instead of 14, Roof said.

How much additional public input will be required depends on the scope of the changes, Roof said. He still views the project as an opportunity for the city to “repair the abysmal mistake” of the original mall. It was the result of an urban renewal effort demolished an entire neighborhood and replaced it with an “uninspired mall that divided our community," he said.

Under Sinex’s original timeline, CityPlace’s 288 apartments would already be occupied and its commercial and retail spaces leased out to new tenants. But signs soon emerged that the schedule was fanciful.

A group called Coalition for a Livable City sued to block voter’s November 2016 approval of tax-increment financing dollars to reconnect St. Paul and Pine streets to Cherry and Bank streets, thoroughfares that were severed when the mall was built.

Sinex told Seven Days in April 2017 that financing was nearly secure and construction could start in the summer of that year. Demolition of the old mall began in November.

In August 2018, the city allowed Sinex to begin pouring the foundation despite not having the estimated $200 million in construction financing needed to complete the project. Steel beams for the foundation were delivered in November 2018, but little else has happened since. The last crane on the site was removed this week.

Going forward, Weinberger stressed the developer needs to be more transparent with the public about the project progress. His statement said the city is “demanding Brookfield give the public a much fuller update on their plan and the project status as soon as possible.”

This includes illustrations of the proposed changes, a new construction timeline, and plan to address impacts on neighbors and traffic during the longer construction period.

Weinberger, himself a developer, stressed, however, that the city has limited control of the project. Aside from the public financing to reconnect long-severed city streets, the property is private — as is the millions of dollars that will be needed to revitalize it.

“The City cannot succeed at our goal of transforming this part of our downtown into a vibrant, mixed-use neighborhood without a strong partner,” Weinberger said.

Weinberger was not available for an interview Friday. It’s unclear how detailed an explanation he or the council has received about the financial issues the project faces.

John Franco, an attorney representing opponents of the redevelopment, said he thinks the redesign will set the project back at least a year and a half, maybe longer. He’s long been told that reducing the size of the project wasn’t possible because it could put at risk the city’s ability to pay for the $22 million worth of public infrastructure needed to support the project.

Bonds for those upgrades are supposed to be repaid with the increased taxes generated from the site. In addition to requiring another full round of public vetting and permitting, Franco said, the complex TIF agreements will also have to be reworked.

He chuckled when he read Brookfield’s claim of wanting to take a “holistic” approach to the project’s redesign that includes the Macy’s parcel. He’s been telling the city that all along, he said

The project’s lenders are likely the ones who ultimately concluded something didn’t add up, he said. “It took the bank to say what the hippies were saying all along — that this is not going to work,” Franco said.
Prev
Next