Brookfield Asset Management wants to abandon the long-stalled CityPlace Burlington project, prompting the city to threaten the international company with legal action for repeatedly failing to make good on its promises to redevelop the downtown plot.

In announcing the news on Wednesday, Mayor Miro Weinberger told reporters that the city had sent Brookfield a notice of default outlining various breaches of an agreement to develop the site. He said he'll give Brookfield, the majority owner of the site, "a short window of time" to prove it's committed to the project before the city files suit.

"Brookfield should keep its commitment to the people of Burlington and see the project through to completion, as it has repeatedly promised," the mayor said during the Zoom press conference. "If not, the city will do everything in our power to see that Brookfield suffers consequences for this breach."

The city sent the default letter on Saturday after learning late last week that Brookfield, in an effort to settle a partnership dispute with project minority owner Don Sinex, would be walking away from the project. Brookfield indicated that Sinex's firm, Devonwood Investors, would take over.

"It appears to the City that Brookfield has been contemplating this action
for some time, and that its earlier assurances and reassurances were knowingly false when made and designed to induce the City's continued support of the Project," the city's default letter reads.

The letter outlines several breaches of the project's development agreement, including that Brookfield would continue construction "without interruption" after demolishing the former mall in 2017. Little activity has happened on the site since.

Sinex had promised that CityPlace would be operational by January 2019. But last October, with little progress made, Brookfield announced it would scale down Sinex's original design from towering 14-story buildings to two 10-story structures.

At a town hall-style forum in January, Brookfield representatives told the public that construction would begin this August and that CityPlace would be complete by 2023. 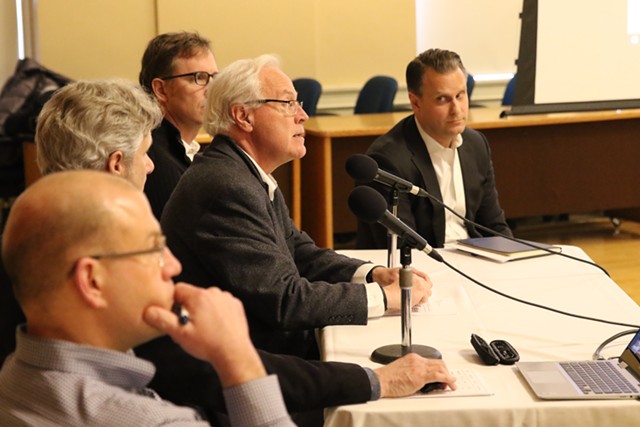 "We wouldn't be sitting here right now if we weren’t for real," Aanen Olsen, Brookfield's vice president of development, told those in attendance.

Weinberger said on Wednesday that Brookfield's delays have endangered the city's ability to use nearly $21 million in tax increment financing funds to fix up sidewalks and rebuild streets lost to the construction of the urban renewal-era mall decades ago.

He said if the city did file a lawsuit, it would "at a minimum" seek ownership of the land needed to reconnect St. Paul and Pine streets between Bank and Cherry streets. The city might also ask for lost property tax revenue and monetary damages related to the construction delay.

CityPlace Burlington Developers Provide Glimpse Into New Plans
By Courtney Lamdin
Off Message
Weinberger said the city had considered issuing a notice of default in the past but had decided that working with the developer was the "fastest route to redeveloping the site." In fall 2019, after Weinberger sent a strongly worded letter to Brookfield, the company wired the city $192,000 to pay several debts and to fund a free holiday parking program.

"I think that was the right decision at that time," Weinberger said, adding that when he heard Brookfield wanted to leave the project, it forced the city to consider its "last resort" to file the default notice and consider a lawsuit.

CityPlace Burlington Developers Pay Outstanding Debt
By Courtney Lamdin
Off Message
"The action is all in the hands of developers at this point in the project," he said.

Despite all of the delays, Weinberger insisted on Wednesday that Brookfield is capable of doing the job. He also made clear the city doesn't trust Sinex, who was the lead on the project for years, to get the development done.


"We ended up in this place where construction started and then stopped, and now we've had two years of basically a dormant site," Weinberger said. "That history came as a result of attempting to make this work with Don, so we do have concerns about trying that again."

Weinberger wouldn't specify how long he'll give Brookfield to reverse course, only saying that the public shouldn't expect another update in July.  He said there are "multiple different things" Brookfield could do to show it's committed to the project.

"I'm not going to spell it out for them," Weinberger said. "They know what they need to do to turn this around."

Read the city's full notice of default below.