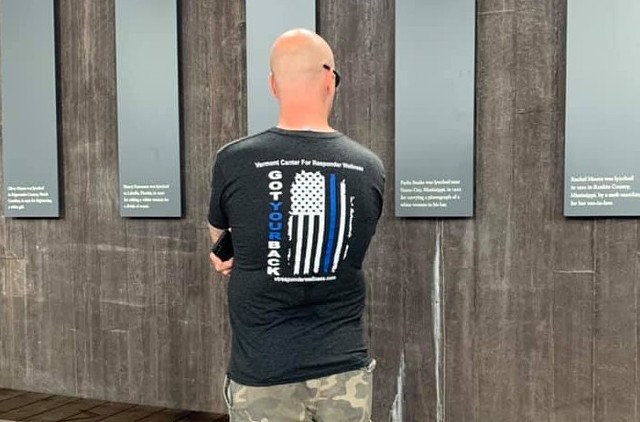 The Burlington Police Department faced backlash after a lieutenant wore a T-shirt depicting a politically charged symbol to a memorial honoring black lynching victims in the United States.

Lt. Justin Couture was one of nine Burlington PD personnel to take a city-sponsored trip to the Legacy Museum and other civil rights landmarks in Montgomery, Ala., last week. The trip was planned to inform the department’s implicit bias training, which Couture oversees and manages, Chief Brandon del Pozo said.

The black shirt features a white flag with a thin blue line replacing one of the stripes, a symbol traditionally used to express solidarity among law enforcement that has been co-opted by the alt-right. The imagery gained notoriety after white nationalists hoisted Blue Lives Matter flags at the 2017 Unite the Right rally in Charlottesville, Va.

Burlington Police Department included the photo of Couture in a gallery of images from the trip posted to its Facebook page on June 26.

Social media users called the wardrobe choice "tone deaf" in light of recent allegations of brutality against people of color by Burlington police officers. In May, two black men sued the officers who knocked them unconscious in separate incidents last fall.

Violence Caught on Camera Leads to Brutality Claims Against Burlington Cops
By Derek Brouwer
Off Message
Vermonters expressed dismay that such a symbol would be displayed at a lynching museum, since police assisted the Ku Klux Klan's planned attacks in the South, particularly on Freedom Riders in the 1960s.

The trip, which del Pozo said cost "several thousand dollars at least," was paid for with police department funds. It included a stop at the National Memorial for Peace and Justice dedicated to sufferers of racism, segregation and police violence. The chief did not go on the trip.

“This is startlingly poor taste at best, and intentional harm to the people at that memorial — and people seeing this post — at worst,” another commenter wrote.

Tabitha Moore, president and founder of the Rutland Area NAACP, called it a “face-palm moment.” She said the picture didn’t concern her as much as the department’s response to the criticism.

On Facebook, the department explained the T-shirt was from the Vermont Center for Responder Wellness, a treatment center that helps responders cope with trauma suffered on the job. The shirts — which also come in red for firefighters, yellow for dispatchers and green for military service members — are distributed for free at the center’s yoga classes, said Sonny Provetto, the center’s founder and a former Burlington cop.

“It’s that sort of behavior that makes it really difficult for people in marginalized communities to feel like people in positions of power, in this case law enforcement, are really understanding how what they do, even in moments like this, can have a profound effect,” she said.

Del Pozo said people were quick to assume that Lt. Couture meant to offend, but said that Couture wears the shirt to raise awareness about officers’ mental health. The message is important given the recent suicides of four New York City cops, two of whom del Pozo worked with on the NYPD. Law enforcement is finally erasing the stigma of asking for help, he said.

“One of the ways to entice them … is to give them a symbol they can identify with,” del Pozo said, referring to the thin blue line, which cops have used since the mid-19th century to refer to law enforcement as protectors.

Couture's T-shirt was not a Blue Lives Matter shirt, but del Pozo said people are “not wrong” in interpreting it that way, especially seeing it worn at a memorial. He said the situation only underscores the trip’s purpose “to see how black Americans don’t see things the way we see things every time.”

“This is a real object lesson in that. We have to take it seriously, and we have to listen,” del Pozo said.

In a written statement to Seven Days, Couture said he wasn't trying to negate the memorial’s importance “in any way” and didn’t mean to offend anyone.

“I realize not everyone sees the thin blue line symbol that way, and the museum and memorial are reminders of that fact,” Couture wrote.

Del Pozo wants trips like this to continue, saying an immersive museum experience is more impactful than a PowerPoint presentation on lynching and segregation. He wants to improve BPD’s “fairly static” annual implicit bias training, which focuses on how cops perceive people of color instead of the opposite.

Moore suggested the department seek out experts to guide reflection on these issues. Otherwise, a T-shirt controversy could happen all over again.

“What is [del Pozo] going to do differently in the future to make sure people who go there … don’t step into things like this?” Moore asked. “And if they do, how do they respond? [Hopefully] with curiosity, compassion, understanding rather than defensiveness.

“I hope that he really takes it to heart,” she added.

Updated, July 8, 2019: This version of the article acknowledges that the memorial honors victims of lynchings across the country, not just in the South.
Prev
Next