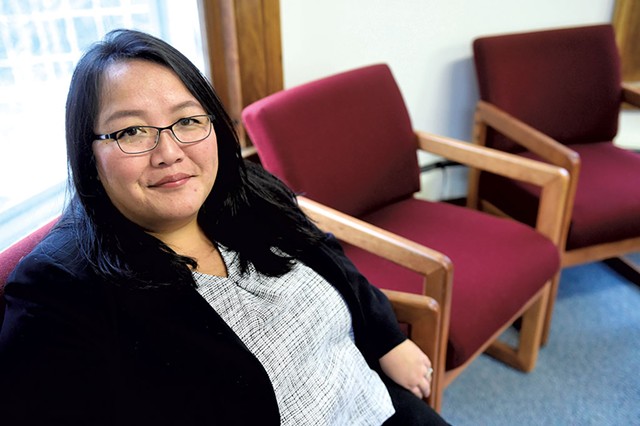 On Wednesday, Yang asked the Senate Judiciary Committee to create a more proactive investigative process that would allow the commission to check police records without a complaint in order to make sure cops aren't discriminating against anyone. But after a law enforcement lobbyist objected to the proposal as a broad expansion of the commission's power, the committee refused the request.

“A complaint has to be supported by allegations that show that, if they were true, they would amount to what’s called a prima facie case of discrimination,” Yang said in an interview Wednesday.

Yang told the Senate Judiciary Committee that the problem with those limitations was readily apparent in the case of former state representative Kiah Morris. After the Bennington legislator resigned her post due in part to racist threats and harassment, Attorney General T.J. Donovan said there was no way to charge her harassers with a crime without violating the First Amendment to the U.S. Constitution.

Later, the Vermont chapters of the National Association for the Advancement of Colored People and the American Civil Liberties Union jointly called on Donovan’s office to investigate whether the Bennington Police Department mishandled its investigation of the threats against Morris.

“It was very public, there were a lot of public officials involved, there was a lot of community involvement and scrutiny,” Yang said, “and that’s something where … a lot of the questions that were raised by many people were, ‘Why isn’t the Human Rights Commission doing something?’”

The commission didn’t do anything, Yang said, because Morris never lodged a complaint, and because there wasn’t enough publicly available information for the commission to investigate a complaint on its own.

To prevent such a situation in the future, Yang proposed amending H.518, a bill about Vermont’s fair and impartial policing policy, which requires all police agencies to adopt policies designed to prevent discrimination. Her proposal would have given the commission power to gather information about police agencies’ compliance with that law without a complaint.

“Our hands are tied in terms of what we can initiate and what we can do,” Yang told the Senate Judiciary Committee Wednesday, “so I saw this as a way to really address the spirit of the fair and impartial policing policy.”

Beth Novotny, a lobbyist for the Vermont Police Association, said she was concerned that the proposal would allow the Human Rights Commission to conduct “fishing expeditions,” looking through police files in search of problems instead of using records to investigate specific allegations.

“There’s really no limit on what they can look at,” she said of the proposal.

Plus, Novotny said, giving the commission new investigative powers doesn’t get to the root of the problem.

“The underlying concern is that they aren’t getting complaints from the community so they’re not able to act on a complaint,” Novotny said. “We think the better solution to that is to get out into the community and actually try to fix that problem directly with the community.”

The Senate Judiciary Committee sided with the Police Association Wednesday morning and decided not to expand the Human Rights Commission’s power to review police records.

Instead, the committee plans to amend the fair and impartial policing bill to create a working group, made up of advocates and government agencies and led by the Attorney General's office, tasked with raising Vermonters’ awareness about the Human Rights Commission.

Yang said she has requested funding for an outreach staffer to help with that work, but she wasn’t sure if that money would make it into next year’s budget.

“Really we just need to have more support so we can do more effective outreach so we can get to community members who then know that when they are experiencing unfair treatment … that they can actually reach out to the Human Rights Commission,” Yang said.
Prev
Next