An investigation by the Vermont Human Rights Commission has found "reasonable grounds to believe" that Chittenden County State's Attorney Sarah George discriminated against a former employee "based on his national origin, race and color."

The HRC released the finding June 25, more than three years after Abdullah Sall first filed his complaint. The parties have six months to settle, after which the commission could decide to take the case to court.

The unanimous finding names the Department of State's Attorneys and Sheriffs and the Chittenden County State's Attorney's Office as respondents in the case. But much of the report focuses on George's role in terminating Sall.

"This case is really important because it really reflects what people of color have always known to be true about racism," said Bor Yang, the HRC's executive director. "It isn't always the white supremacist. It shows up in very subtle ways."

Sall announced his intention to sue George in February 2017, a month after George dismissed him. George had been appointed Chittenden County state's attorney just eight days before she fired Sall, a receptionist.

In his May 2017 HRC complaint, Sall alleged that he was subjected to a hostile work environment and was harassed about his accent. He claimed that one reason George fired him was because people couldn't understand what he was saying. Sall's attorney, John Franco, told Seven Days at the time that his client faced “disparate treatment” in George's office because he's a Muslim immigrant from Liberia.

Burlington Council Candidate to Sue State’s Attorney for Discrimination
By Kymelya Sari
Off Message
Though the investigation didn't find enough evidence to support Sall's hostile workplace claim, the HRC did conclude that Sall was treated differently based on his race — specifically because George terminated Sall but let two white employees with similar performance issues stay on the job.

"One of those women was completely failing at her job and was given probation and support," Yang said. "She made the same mistakes [as Sall], the same serious mistakes, and she had been kept on. She had been given a chance over and over and over again."

Sall started as a receptionist in June 2016, after completing an internship for then-state's attorney T.J. Donovan. George was appointed to the post on January 19, 2017, after Donovan was sworn in as Vermont's attorney general.

George said she fired Sall because he wasn't qualified for the job and made numerous mistakes, such as misfiling paperwork so that arrest warrants were never issued. George told a colleague that Sall had argued with staff in the hallway, got defensive in response to constructive criticism and gave out incorrect information on the phone, all of which contributed to her decision to let him go, according to the report.

George told investigators she'd "been frustrated by his lack of competence during the time she was a deputy state's attorney," even before she'd been appointed the county's top prosecutor.

Investigators reviewed 10,000 internal emails and found "very few supporting documents" to corroborate George's explanations, the report says. His personnel file didn't contain any details of wrongdoing, nor did it include notes about any performance evaluations.

"There were also approximately 14 attorneys, three victim’s advocates and five other administrative staff who could have sent complaints to any of these supervisors," the report says. "There was simply no evidence of explicitly 'scolding' him." 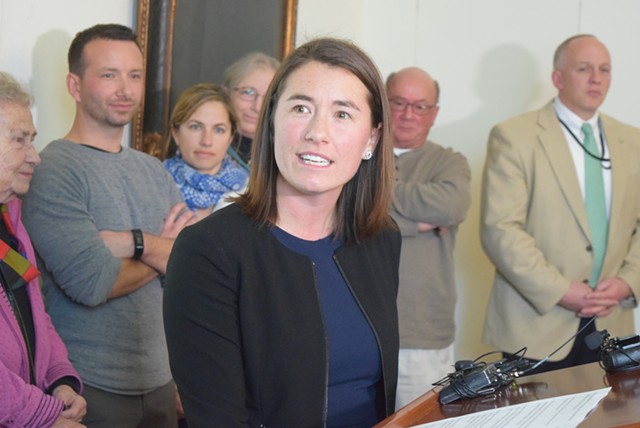 A white receptionist known as Employee B, however, was afforded multiple opportunities to correct her shortcomings, the commission concluded.

"Employee B’s personnel file revealed that she had also — for years — failed to file paperwork just as important as the paperwork Mr. Sall was not filing," the report says. "Employee B was given a pass. Mr. Sall was not despite the fact that they had similar performance issues during overlapping time periods."

The report also found that George could have done more to protect Sall from "discriminatory conduct" from the public. While the report could not find a basis for a hostile work environment based on race, it found that complaints about Sall's manner of speaking were "not unusual."

Sall emailed office staff on two separate occasions to complain that members of the public had made rude comments about his accent. His coworkers exchanged emails that suggested Sall's accent "is one of the reasons why people get mad and swear at him a lot," the report says.

The HRC was unable to determine how frequent and severe these comments were but concluded that George could have asked Sall "how these interactions with the public were affecting him at work."

The report acknowledges that it's common for new supervisors to terminate employees hired by their predecessors, but it concludes that George didn't give Sall a chance. She could have counseled him, explained her expectations or otherwise "hit the reset button."

"She chose not to," the report says. "This reflects her biases."

In an emailed statement Friday, George told Seven Days that her decision to fire Sall had nothing to do with his race, national origin and color. Speaking generally, she said managers sometimes fire workers "for operational integrity and efficiency; and to ensure that we are serving the citizens, as taxpayers, to the best of our ability."

Should the matter go to court, George said, she believes that she can prove Sall was fired lawfully as an at-will employee, which means she could terminate him at any time, for any reason.

George said she considers herself an advocate for underrepresented and marginalized Vermonters: "I will continue to do this work, and will not be deterred by this finding," she wrote.

Indeed, George is known for her progressive ideals. The prosecutor is in favor of opening safe drug injection sites and has expunged more than 100 criminal records involving minor cannabis-related offenses. Police have criticized her for being too soft on crime.

Running Unopposed, State's Attorney Sarah George Campaigns for Reform
By Molly Walsh
Politics
Recently, George joined the growing chorus of voices calling for a reduction in police spending in favor of bolstering social services. Earlier this month, George announced she will review all pending cases involving Black people to determine whether “consistent decisions were made to comparative cases with white individuals,” VTDigger.org reported.

The commission's report concluded that even well-meaning, well-educated white people have implicit bias. While George didn't demonstrate explicit bias against Sall, the report says, "it is difficult to refute the very strong inference of discrimination in this case."