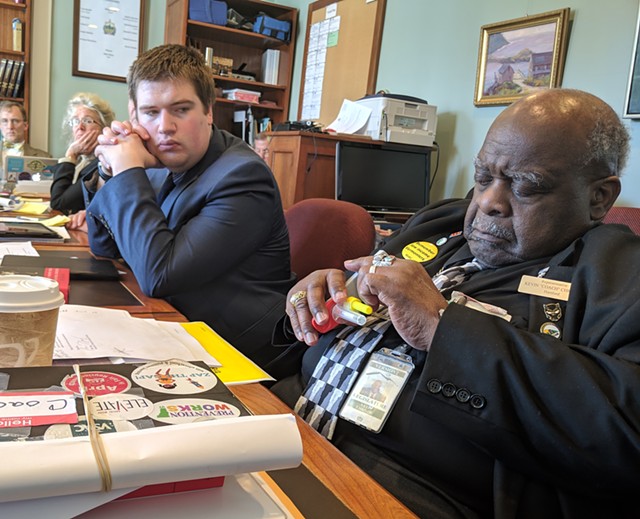 Increasingly in the Statehouse, the topic of marijuana regulation has been inseparable from road safety policy. Gov. Phil Scott has demanded a roadside testing protocol for cannabis before the state allows retail pot sales — a demand that some lawmakers say is impossible to meet because roadside tests aren't reliable.

But on Wednesday, the conversation about the pot bill left the topic of cannabis entirely. House Transportation Committee chair Curt McCormack (D-Burlington) is trying to tack a new seat belt law onto S.54, the bill that would establish a regulated marijuana market in Vermont.

McCormack wants to make Vermont’s seat belt law a “primary enforcement” matter, meaning officers could stop drivers for not wearing a belt. Currently, seat belts are required by law, but police can only ticket drivers for a violation as a “secondary” offense during a traffic stop; drivers cannot legally be pulled over for just a seat belt infraction.

As he presented the proposal to the House Government Operations Committee, McCormack noted that the vast majority of Vermont drivers wear seat belts, but 63 percent of the people who died on Vermont roads last year were not wearing them at the time.

The House on Tuesday also approved a primary seat belt enforcement policy as part of S.149, a bill dealing with the Department of Motor Vehicles, and McCormack said Scott has expressed a willingness to approve it.

“The problem is only in the Senate,” McCormack told the Government Operations Committee Wednesday.

Senate President Pro Tempore Tim Ashe (D/P-Chittenden) said Wednesday that the Senate has already looked into the issue and decided it would be bad policy to let cops stop drivers over seat belts in light of studies that show such laws are used disproportionately to stop people of color.

McCormack, though, wants to force the issue. He said that since the cannabis regulation bill deals with highway safety concerning impaired drivers, it would be appropriate to also add the seat belt policy.

“I’m looking at it as another way to pass primary seat belts,” McCormack told the Government Operations Committee.

“Putting [a primary seat belt enforcement policy] on additional bills is making a game out of something that isn’t a game,” Ashe said.

Exactly how the cannabis bill will deal with road safety remains to be seen.

The House Government Operations and Judiciary committees have both spent much of the past week discussing approaches to road safety for S.54. Scott has said he will not approve any legislation to tax and regulate cannabis unless it includes funding for prevention and education, in addition to a saliva test designed to detect marijuana use by drivers.

The Senate has repeatedly refused to pass legislation that includes such a test, largely on the basis that the tests do not provide meaningful information about whether a driver is impaired — they only indicate whether there are drugs in the driver’s system — and studies have shown that roadside saliva tests (as opposed to saliva samples processed by a lab) aren’t consistently accurate.

On Wednesday, the House Judiciary Committee proposed a compromise policy with the hopes of satisfying both the governor and the Senate. That proposal would create a system that allows police to collect drivers’ saliva and send it to a lab for analysis. The House Judiciary proposal would not allow roadside saliva testing — officers would have to take drivers to a police station or barracks to collect a sample — and it would require police to get a search warrant before collecting saliva without consent from the driver.

The House Government Operations Committee is expected to decide on both saliva testing and seat belt enforcement this week before the cannabis legislation advances toward a vote by the entire House.

If the House passes the tax-and-regulate cannabis bill in a different form than the Senate did, the two bodies would have to settle their differences before the bill goes to Scott for his approval or veto.