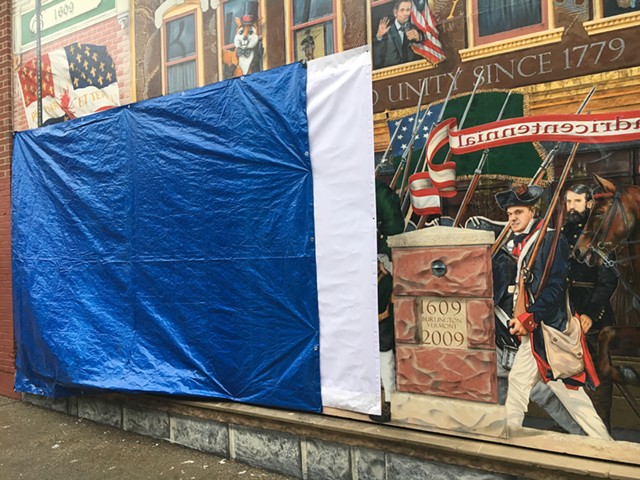 Burlington officials say someone literally defaced the controversial “Everyone Loves a Parade!” mural this week.

“An unknown person applied a solvent to the faces of the people in the front of the mural,” del Pozo said, adding that the chemicals “melted the paint and the finish down to the wood.”

Once the faces were removed from the 124-foot-long mural, del Pozo said, the vandal spray painted pink dollar signs in their places. It marked the second time the mural had been recently vandalized.

“About two weeks ago … somebody spray painted ‘colonizers’ across the mural,” del Pozo said, “but it was over the laminate, so it could be removed.”

No arrests or citations have been made in either case, del Pozo said. While he wouldn’t share specifics about the investigation, the chief noted that there are security cameras in the alley where the mural is located.

The artwork has been controversial in Burlington because it predominantly represents Caucasian people. It was intended to commemorate Samuel de Champlain's "discovery" of Lake Champlain and some of the people who shaped Vermont's history over the subsequent 400 years. Critics say the massive piece of public art fails to represent the legacy of Native Americans in the state.

In response to the criticism, the Burlington City Council voted in October to remove the mural by 2022.

Albert Petrarca, a vociferous critic of the mural, has called the piece “white supremacist” art. Petrarca criticized city officials for not immediately removing the piece, which lines Leahy Way between Church Street and a parking garage.

In an email sent after this week's vandalism was discovered, Petrarca called the act “the people's response to the council's 8-3 racist vote to keep it up until 2022.” He said in a later email to Seven Days that he doesn't know who committed the crime.

Petrarca has resorted to vandalism in the past to express his disgust with the mural. He was cited for unlawful mischief in October 2017 after he spray painted “Off the Wall” on an identification plaque next to the mural. In that case, Petrarca himself called the police and confessed to the vandalism.

Burlington Activist Takes Aim at 'White Supremacist' Mural
A Burlington activist said he used graffiti Monday to make a political statement about a mural off Church Street.
By Sasha Goldstein
Off Message
Because of the extensive damage caused by this week's defacement, del Pozo said those responsible may face felony charges.

“Vandalism in excess of $1,000 of someone else’s property is a felony,” del Pozo said.

In a written statement, Mayor Miro Weinberger condemned the stunt and said it disregarded the public process that led to the council’s recent vote to remove the mural.

“By acting unilaterally and in contradiction of the recent Council decision, the vandal(s) has disrespected those engaged community members and the democratic rule of law,” Weinberger wrote.

“When arrests are made,” he added, “we will seek full prosecution of the perpetrators.”

As of Friday morning, the damaged section of the mural was covered with a tarp.
Prev
Next