Seven Questions for Nick Floersch of Code for BTV | Off Message

Seven Questions for Nick Floersch of Code for BTV 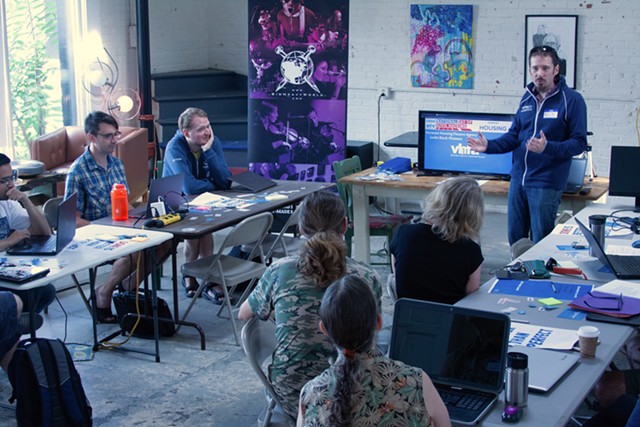 Monday is the start of Burlington’s third annual Innovation Week. Colleges, nonprofits and companies will host a series of events designed to draw attention to the local tech scene.

This year’s offerings include the Road Pitch finals, in which startups from across the state compete for a $5,000 grand prize, as well as a panel discussion about blockchain technology, the second Vermont Investors Summit and a conference on healthcare innovations for treating substance abuse. Full disclosure: The final event is Seven Days’ 12th Vermont Tech Jam.

In his day job, the 39-year-old builds tools for mapping applications as a GIS solution developer for Montpelier’s Stone Environmental. Outside of work, he’s a “brigade co-captain” of Code for BTV, the local chapter of the national Code for America. This organization of volunteer “civic hackers” provides technological assistance to government and nonprofit entities. For example, on August 11, this year’s National Day of Civic Hacking, Code for BTV volunteers worked on projects for the Vermont Housing Finance Agency, the Vermont Affordable Housing Coalition and the Vermont Coalition to End Homelessness.

Floersch got involved with the local brigade’s launch in 2013 and became a co-captain three years later. Seven Days chatted with him about Innovation Week, Sector Mash and Code for BTV.

SEVEN DAYS: What’s the purpose of Innovation Week?
NICK FLOERSCH: The idea is generally to get people thinking about what the community in Burlington offers for aspiring techie people and creative people and to just get people to recognize that Burlington is a pretty amazing tech community.

SD: How does Innovation Week feed the local tech scene?
NF: Anytime that you spend all day doing something — programming or pushing papers or watching kids at school — when you can get out and go to an event that says, “Hey, what about this? Think about this totally different thing,” there’s a new energy that can be added. It just energizes you. And it energizes the community as a whole.

SD: What was the impetus for Sector Mash?
NF: An event in 2017 called the Community of Opportunity was organized by a group called Burlington Code — not Code for BTV. They passed it off to us. At the same time, we had been talking with the University of Vermont’s Office of the Vice President of Research, and they wanted some way to break down the mental barriers that exist in academia between technology and innovation, and arts and humanities.

SD: How will the event go down?
NF: We’ve divided the evening up into three pieces. For the first hour, we have artists who work with both physical and visual arts. Maybe it’s data-driven. Maybe it’s only possible because of some process they can do with technology. Maybe it’s virtual reality.

The next hour and a half, roughly, is then split into these lightning talks. People will have three minutes.

At the end of it is the social, the mixer. It would be ideal for anybody who’s looking to do one-stop shopping for getting into either the creative community or the tech community or both.

SD: Who are the speakers giving lightning talks?
NF: We have, last I looked, 18 speakers. These are [entities that provide] resources. Generator, LaunchVT, BTV Ignite. Cerf+, it’s the artists’ safety net. We’re having the U.S. Department of Arts and Culture outpost in Burlington. The Burlington Code Academy is a new bootcamp for coders, which is making a tremendous impact on the local tech scene.

SD: You mentioned crossover between the tech and creative communities. Where do they overlap?
NF: When I was taking computer science courses, I had this very animated professor, and he would always remind us that programming was as much an art as a science. I think that a lot of the technologists feel that way. They’re creating things at all times. It’s just a different form of expression.

Now, they may be expressing it in a very ordered, structured manner. Or maybe it’s a Jackson Pollack. But it’s some sort of expression. And that expression can sometimes just mean they make beautiful-looking code.

The Champlain Mini Maker Faire is a great example of the crossover between art and technology. People are making crazy things and wonderful things. And they’re using their science, their technology, engineering and math skills to make toys, art, fun expressions.

SD: Why did you get involved with Code for BTV?
NF: The people involved at the leadership level at Code for BTV, we all have this desire to help the community. A lot of the volunteers are people who program here in Burlington. They [might] program auto websites all day. Then they say, “What I’d really like to do is help people who are being affected by hurricanes in Florida today, right now. So what can I do?”