Think Vermont, a new state marketing campaign and website, is designed to lure businesses and employees to the Green Mountain State, Gov. Phil Scott said Friday in announcing the effort.

“Our Vermont brand is powerful,” Scott said at a press conference at the Vermont Tech Jam at the Champlain Valley Exposition in Essex Junction. “Think Vermont will tell unique and positive stories about Vermonters and Vermont businesses.” 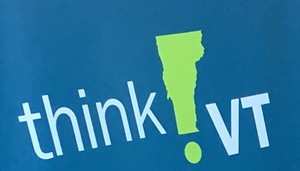 The marketing scheme comes with a logo that puts the shape of the state between the words “Think” and “VT.” A dot turns the slender outline of the state into an exclamation point.

Scott, who often says that Vermont loses an average of six workers every day from its workforce, said he hopes Think Vermont will lower that number.

A website, thinkvermont.com, doesn’t dwell on such negative stats, nor on the others Scott routinely cites — that Vermont loses an average of three public school students a day and that one baby is born to an opiate-addicted mother each day.

Instead, the site draws a picture of quaint Vermont.

“We only use red tape for ribbon cuttings,” the website declares, disregarding longtime business complaints about the state’s environmental regulations.

A page headed “Getting Around” doesn’t tell the viewer how hard it is to get to many Vermont locations via public transportation. But the verbiage is accurate for those who have a car: “Spend more time moving and less time sitting at traffic lights — some towns don’t even have any.”

The site touts the accessibility of state leaders — and lists the cellphone numbers and email links to economic development staff.