Developer Has Not Sought Foundation Permit for Massive Burlington Project 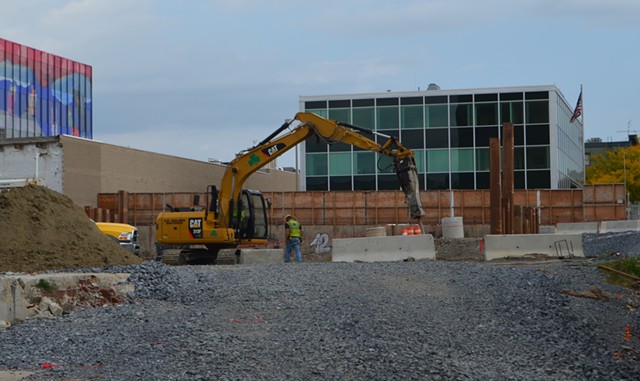 When developer Don Sinex pleaded to the Burlington City Council on August 27 that he needed to get started on foundation work for the huge CityPlace Burlington project, he portrayed the situation as urgent.

The downtown site was ready for the work, Sinex told Seven Days in an email. Not moving forward would delay the project up to three months and would mean higher costs for construction, he told reporters before the council's vote.

The council gave Sinex permission to lay the foundation of the proposed 14-story building before all the project's funding and contracts were in place. Sinex said at the time that he planned to start the foundation work within two weeks.

Nearly six weeks later, he has not filed the paperwork to get a city permit for the foundation, according to Burlington's Department of Public Works.

"We’re losing patience," said Jeff Glassberg, a consultant who is monitoring the project for Burlington. The city is encouraging the developer to "move ahead," he said.

The mixed-use development is being built where much of Burlington Town Center mall once stood. The mall was demolished earlier this summer, but the site has seen little activity since. Plans call for housing, retail and office space.

"It’s a huge project," Glassberg acknowledged. "But I’m sorta like 'Get at it, guys. You’re the experts.'"

Mayor Miro Weinberger, who championed the project despite opposition from citizens' groups, said Tuesday that he has grown "concerned about the lack of progress on the site."

"The City has made good on all of its commitments to the project," Weinberger said in a statement to Seven Days. "It is time for the developers to act and begin site construction, and to communicate their progress to the public regularly."

Sinex attributed the delays to a disagreement with construction manager PC Construction, which has slowed the drafting of a new contract with the South Burlington firm to oversee the next portion of the project.

"They’re up to snuff now, and they're doing everything a guy like me expects," he said, calling himself a "tough hombre" to work for. "It’s a question of getting all the little ducks in order."

He said he expects to finalize the contract and seek the permits for the foundation within two weeks.

Sinex defended his work, saying that he had been "completely, 100 percent" upfront with the city.

City councilors and Glassberg said they weren't losing faith in Sinex. After all, Glassberg said, Sinex has already made substantial progress and continues to express "full commitment to the project."

"It’s way too quiet over there," he said. On Tuesday afternoon, a sole excavator dug in the soil of the huge and empty lot.

City officials say they're in the dark about reasons for the delay. "We granted the amendment to pour the foundation and there was some controversy," said Council President Kurt Wright (R-Ward 4). "We want to understand why he hasn’t."

When Councilor Jane Knodell (P-Central District) was council president last year, she said Tuesday, she pushed for quarterly updates from Sinex. "We never quite got there. It’s not too late to fix that and improve that," she said.

The project has already faced several delays. A citizen's group filed a suit over it. Last winter, workers found asbestos in part of a roof of the old mall, slowing down the demolition process.

Both Wright and Knodell said they hope to have Sinex update the council next Monday. "We’re trying to be good working partners. Certainly, I think Don should keep us informed," Wright said. "There is definitely a concern."

If Sinex doesn't draw the foundation permit by November 1, Councilor Dave Hartnett (D-North District) said he will seek to allow city residents to park in the vacant dirt lot.

"I hate to leave that area boarded up," Hartnett said, noting that it's better to allow holiday shoppers to make use of the space.
Prev
Next