The developers behind the long-stalled CityPlace project unveiled on Monday a redesigned concept intended to fill the empty downtown pit that was once home to the Burlington Town Center mall.

Gone are the soaring 14-story structures originally proposed. In their place are two towers. One, on the Cherry Street side of the property, would rise 10 stories and hold 280 to 300 apartments — the same as the original proposal. Twenty percent would be "affordable," as required by Burlington's inclusionary zoning ordinance.

A 175-room hotel of similar height would occupy the Bank Street side of the downtown parcel. Retail space would fill the first floor of each building, and levels of parking would fit between — and below — the structures.

The new plans would also incorporate the former Macy's building, which would house retail, commercial and office space. The remnants of the Burlington Town Center mall, which opens onto Church Street and extends west, would remain intact. 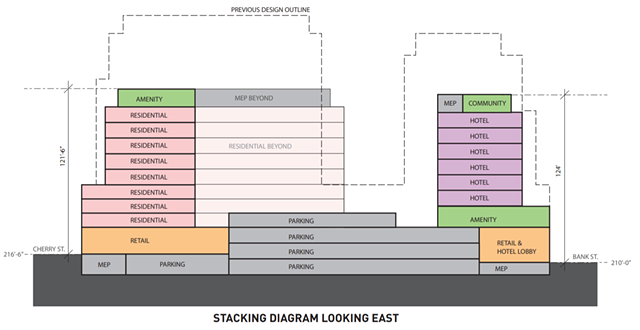 “What you've laid out tonight represents the potential of achieving all the major goals the city laid out as we sat down to this process years ago,” Mayor Miro Weinberger said, listing housing and jobs among the benefits.

“This represents a step in the right direction toward fixing a part of the downtown that has long been problematic, but we certainly [have] a long way to go,” he added.

The update was the most substantial in months and came after Weinberger demanded the developer provide some insight into the long-delayed project. Back in 2016, minority project partner Don Sinex said CityPlace would be open by January 2019. He demolished the former mall in 2017, but little has happened at the site since. Small businesses on Church Street have lamented the loss of foot traffic after the mall and parking garage were torn down.

Developer: CityPlace Burlington Project Will Be Redesigned
By Kevin McCallum
Off Message
Although preliminary, Brookfield’s plans were welcomed by city councilors who said the heights of the newly proposed structures are more to scale with Burlington’s downtown.

But there are still a handful of unknowns, namely parking. There will be “adequate” spaces, but Brookfield is still firming up a total number, said Aanen Olsen, the company's vice president of development. Apartment rental rates are also undecided.

Olsen wouldn’t say how much the project will cost or how long construction will take; the prior proposal carried an estimated price tag of about $225 million.

He did tell councilors that he's “confident” the project will create enough revenue to cover nearly $22 million in tax-increment financing debt. Voters approved the TIF bond in November 2016 to help pay to reconnect St. Paul and Pine streets, which were cut off when the urban renewal mall went up in the 1970s.

Councilor Max Tracy (P-Ward 2) thanked Brookfield for the update but said the developer has much to do to restore public trust. Listening to residents is “crucial,” Tracy said.

“I hope that it’s not just something that is just a perfunctory step … which is very much what it felt like in the last case, and that there is real input that's taken,” he continued.

Councilor Karen Paul (D-Ward 6) opined that Brookfield has listened to the public by reducing the project's height. She said the city needs to move forward, not backward. Councilor Chip Mason (D-Ward 5) said the update was “encouraging” and asked what could hold up the project.

Olsen said the next hurdles are permitting, signing leases and ongoing litigation with project opponents. But John Franco, the attorney representing the plaintiffs in U.S. District Court, said he’s optimistic that the parties can move forward.

“It's very much what we had expressed we wanted two years ago,” Franco said, referring to the building height. “This [proposal] doesn’t have half the warts the old one has.” 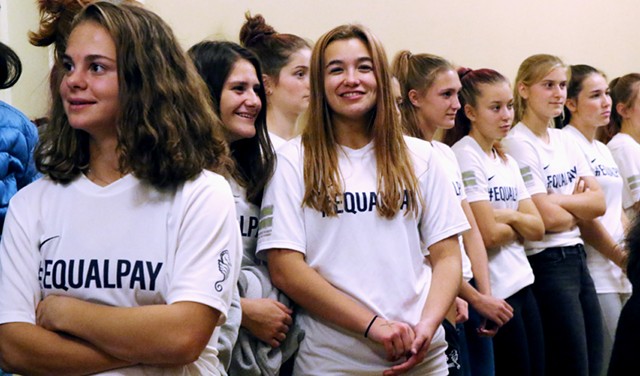 The girls earned national media attention — and a yellow card penalty — for sporting the custom jerseys during a home game on October 19.

BHS Girls Soccer Team Scores Media Spotlight with #EqualPay Jerseys
By Molly Walsh
Off Message
One of very few measures cosponsored by all 12 councilors, the resolution recognizes each player as “a change maker, influencer, and role model for our city and our youth.” The team has sold more than 2,500 of the jerseys to people in nearly 40 states. The proceeds support women’s programs in Vermont.

Each councilor, plus the mayor and some city staff, sported the jerseys during the meeting. After reading the resolution, City Councilor Joan Shannon (D-South District) suggested her colleagues stand in solidarity with the team’s fight for pay equality.

“We, too, have rules in this council chamber about excessive celebration, and I think it's time we all take a yellow card,” she said to applause.

The girls will play at CVU in the playoff semifinals on Wednesday at 3 p.m.

Click here to see other CityPlace renderings.
Prev
Next