When CityPlace Burlington developers announced last month that the long-stalled project would be redesigned and further delayed, Mayor Miro Weinberger urged the firm to provide a full update on next steps “as soon as possible.”

Weinberger had hoped to soon see project plans and illustrations and hear how Brookfield Asset Management would minimize the impacts on neighbors who are tired of the hole in the middle of downtown. But he didn’t get his wish at Monday night’s city council meeting, which marked the first time since July that representatives from Brookfield have spoken publicly about their plans for Burlington’s infamous pit.

Developer: CityPlace Burlington Project Will Be Redesigned
By Kevin McCallum
Off Message
Instead, their comments amounted to what some councilors called a “non-update update.”

Brookfield vice president of development Aanen Olsen told councilors what they’ve heard many times before: The multimillion-dollar Burlington Town Center redevelopment is a large and complex undertaking that is currently in litigation, which limits what developers can say publicly.

"As we work through these obstacles, we recognize it may require additional time for construction to commence,” Olsen said, reading from a prepared statement. “This has been a difficult process for us all. We can only thank you for your patience, and we look forward to working together to move the project forward."

With prompting from project consultant Jeff Glassberg — and more prodding from city councilors — Olsen outlined some steps Brookfield plans to take in the next six months: restoring parking and pedestrian access around the site, offering free holiday parking downtown, and partnering with Burlington City Arts in the next 90 days to complete an art installation on the large barriers around the site.

Burlington Presents Downtown Parking Perks for the Holidays
By Molly Walsh
City
Glassberg added that Brookfield will likely seek amendments to its development agreement with the city. He said the firm is committed to more public engagement in the coming year.

But Brookfield did not answer the primary question on the minds of many for months: When will construction start?

“Are we starting back over at ground zero?” council President Kurt Wright (R-Ward 4) asked. “Can you give us anything that we can tell the public?”

"It's certainly not going to be 10 years, or even four,” Olsen responded. “I think with phasing the project, we can anticipate seeing some action in the near term, in the next year."

City councilors have been given timelines before, but none have played out as planned. Minority project partner Don Sinex said in 2016 that CityPlace would be open and occupied by January 2019, but that target has long passed. Sinex demolished the mall in 2017 and got special permission in 2018 to pour a new foundation but never took action. A construction crane was removed from the site in mid-July.

Workers Remove Crane From Site of Long-Stalled CityPlace Project
By Sasha Goldstein
Off Message
On Monday, councilors lobbed criticism at the three Brookfield representatives in attendance, two of whom were new to council meetings. Olsen replaced Brookfield senior vice president of development Will Voegele, who took another job, according to Olsen. City Councilor Sharon Bushor (I-Ward 1) said the rotating cast of characters doesn't give her much confidence. 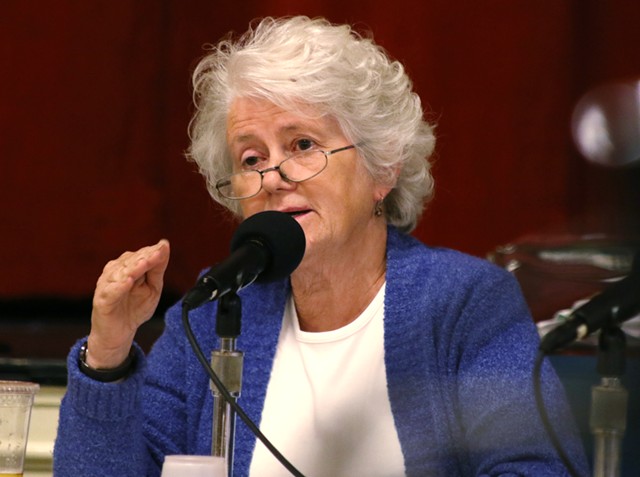 “It makes me feel like this is a project that nobody wants and you keep passing it on to the new, unfortunate people,” she said.

Both Bushor and Councilor Brian Pine (P-Ward 3) said it doesn’t feel like Brookfield is committed to the project.

“The spirit of partnership just hasn’t been here lately,” Pine said, adding the council wants more transparency “to the point where it may make you a little bit queasy and uncomfortable to share, but I think that's what a public-private partnership is."

Councilor Max Tracy (P-Ward 2), who phoned in to the meeting, was a bit harsher. He said Brookfield’s inaction violates the parties’ development agreement and suggested the council levy penalties on the developer.

“The time for playing nice has long since passed,” Tracy said. “They have taken advantage of our good faith, our goodwill and the city’s willingness to play ball.”

"Penalizing you is penalizing ourselves," Shannon said to the developers.

Councilor Franklin Paulino (D-North District) urged Brookfield to attend Burlington's Neighborhood Planning Assemblies, which meet several times a month in each ward. Councilor Perri Freeman (P-Central District) had planned to introduce a resolution Monday that would have codified that request, but she ended up referring it back to a council committee after hearing Brookfield pledge more public engagement.

"I feel like we're moving in a direction to have some more public process and accountability and transparency," she said.

Councilor Adam Roof (I-Ward 8) urged more communication at council meetings, even if there isn't much to say. Fellow Councilor Chip Mason (D-Ward 5) had a different perspective, telling Olsen, "You showing up again and saying you have nothing to report, even if true, doesn't help."

Weinberger said he's frustrated that Brookfield didn't share more but thinks the company will be a "good partner though this extended delay" and get CityPlace "back on a predictable path forward."
Prev
Next