Milne Won't Challenge Scott or Sanders in 2018 | Off Message 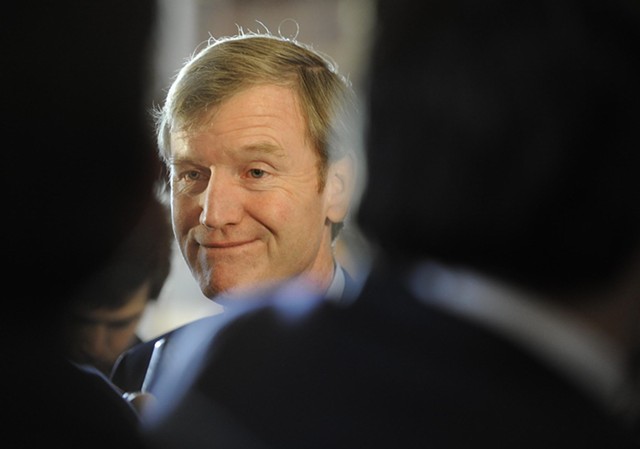 Republican businessman and former gubernatorial candidate Scott Milne announced Thursday that he will not run for statewide office in 2018.

Milne told Seven Days last week that he was considering a run for office this year and had hinted that he might challenge Republican Gov. Phil Scott in the primary or Sen. Bernie Sanders (I-Vt.) in the general election.

The 59-year-old Pomfret resident and travel agency president ran against then-governor Peter Shumlin in 2014 and nearly unseated him. Two years later, he challenged Sen. Patrick Leahy (D-Vt.) but lost by a much larger margin: 60 to 33 percent.

In an announcement to supporters and reporters Thursday morning, Milne said that more than 300 people had urged him to run for office in recent weeks. He directly criticized Sanders for an agenda he called "arthritic and driven by politics" but suggested that Sanders' reelection was a foregone conclusion.

"With his next term, I believe he has a final opportunity to prove that he is not just another flavor of the careerist politicians who’ve gotten us into this mess," Milne wrote.

Milne's non-announcement did not directly name Scott or mention the conservative furor over the GOP governor's reversal on gun control, but it referred to broken promises.

"In Vermont, we need leadership that believes what we do is our measure as a person. Deeds outweigh words," Milne wrote. "When politicians use words to make promises, they can’t keep — it undermines faith in government. Without faith in government, all of our futures are at risk."

Earlier this month, when asked directly about Scott's reversal on gun control, Milne made a similar remark: "Phil's got a problem, because you shouldn't make promises you can't keep."

Despite his apparent dissatisfaction with Vermont's political leadership, Milne said he would not be bringing these points to the campaign trail in 2018.

"This will get better if you join me in honoring democracy ... by being active and interested," Milne wrote. "Although I will not be a candidate for statewide office in Vermont this year, I deeply appreciate you, and our friendship."
Scott Milne Statement on 2018 Elections
Prev
Next