On Your Mark: Candidates Line Up for the 2018 Campaign | Fair Game | Seven Days | Vermont's Independent Voice

On Your Mark: Candidates Line Up for the 2018 Campaign 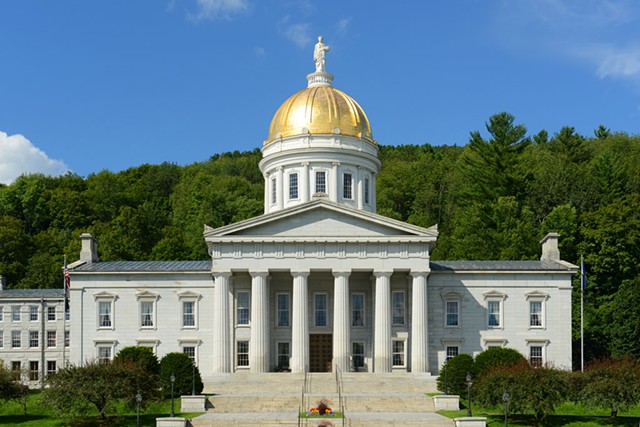 It seems awfully early. But it's almost too late.

Vermont's filing deadline for major party candidates in the 2018 election is May 31. As of this writing, most contenders have yet to turn in petitions, but the broad outlines of the campaign are becoming visible.

Short version? Democrats are aiming for legislative gains, Republicans are setting the bar low and the Progressives are thinking incremental. The highest-profile August primary is likely to be the Democratic race for governor, with at least four candidates vying to take on first-term incumbent Republican Phil Scott.

But the most contentious battleground will be for the Vermont House. Dems and Progs want a veto-busting supermajority, while Republicans are bent on preserving their power to sustain Scott.

Just imagine how different this year would be if the majority could consistently override vetoes. Priorities such as paid family leave and the $15 minimum wage, which Scott vetoed, would have likely become law. The legislature might have adopted a waterways cleanup program with some teeth. We probably wouldn't be launching a special legislative session to debate the budget and taxes.

Currently, the House includes 83 Dems, 53 Republicans, seven Progs and seven independents. Overriding the governor requires the votes of two-thirds of those present — or 100 if all are present.

"Putting together a veto-proof majority between Democrats, Progressives and Democratic-leaning independents is a pretty realistic goal for us," said Rob Hipskind, head of the Dems' coordinated campaign. "It would take a seven-seat pickup."

That goal is in sight, thanks to widespread antipathy toward President Donald Trump, at least a dozen Republican retirements and a strong Democratic recruitment effort. The Dems say they will field at least 120 candidates; Republicans say they're at 80 and still beating the bushes.

Vermont Republican Party executive director Jack Moulton heads an underfunded, under-organized party. When asked about his goal for the House, Moulton laughed and said, "Fifty-one," the minimum needed to sustain a veto. He added, "We'd like to hold at least the 53 we've got. Our ambitious goal is 60. My personal goal is 55."

That seems ... modest. The Dems are targeting at least 17 seats now held by Republicans or R-leaning independents.

Moulton does have one high-profile district in his sights: that of House Speaker Mitzi Johnson (D-South Hero). In 2016 she finished second in a race for two seats and edged out the third-place Republican by a mere 103 votes.

Democrats are feeling confident about the House. They've fielded strong candidates in many swing districts. Some examples: arts administrator Sara Coffey has raised nearly $10,000 — a massive amount for a Vermont House race — in her bid to replace Republican Rep. Mike Hebert of Vernon, who is stepping aside. Matt Birong, owner of 3 Squares Café in Vergennes, aims to succeed retiring Republican Rep. Warren Van Wyck.

Vermont Progressive Party executive director Josh Wronski is optimistic. "We definitely see this year as a chance to build on our [seven-member] House caucus," he said. The Progs' most likely pickup: Susan Hatch Davis of Washington, who represented the Orange-1 district for 10 years before narrowly losing to Republican Rep. Bob Frenier in 2016. She's aiming for a comeback, and Frenier is not seeking reelection.

Democrats hold a supermajority in the state Senate, with 23 Dems and Progs and only seven Republicans. The numbers are unlikely to change much. Moulton hopes to gain a seat or two, but that seems unrealistic. He points to retired pilot Bill Huff as a strong challenger to Sen. Mark MacDonald (D-Orange). But the latter has served for eight consecutive terms and took 57 percent of the vote in 2016. Moulton also hopes that Alex Farrell, a data analyst with Union Mutual of Vermont, can make headway in the six-seat Chittenden district, but he acknowledged that that will be a tough fight in such a liberal enclave.

The early leader for most contentious legislative primary is the state Senate race in Washington County. There are three incumbents: Progressive/Democrat Anthony Pollina and Democrats Ann Cummings and Francis Brooks. The first two have already filed their petitions, and Brooks is expected to run. (He could not be reached by press time.)

In the race for governor, Scott is still the favorite, but Democrats see dents in the Teflon.

"He's done a lot to upset people on all sides," said Hipskind. "His support may be thinner than he'd like."

Scott antagonized his conservative base by signing a marijuana legalization bill and a series of gun restrictions. Now, he's risking his reputation as a conciliator with his hard line on taxes.

There is a potential wild card: the entry of a gun-rights candidate. Sen. John Rodgers (D-Essex/Orleans) had talked of joining the Democratic field but said Tuesday that he'd decided against running for governor. Springfield grocer Keith Stern, a Second Amendment advocate, is challenging Scott in the Republican primary, but he's little known across the state. The Libertarian Party could also field a general-election candidate who'd siphon gun-rights voters away from Scott. "We are in the process of reviewing potential candidates," wrote party chair Jeremy Ryan in an email. "It seems we have had more interest in running as a Libertarian since Gov. Scott signed the gun bills."

At the top of the ticket, there's no sign of serious Republican competition for U.S. Sen. Bernie Sanders (I-Vt.), who finally announced his bid for reelection on Monday, or for Congressman Peter Welch (D-Vt.). Burlington attorney Jasdeep Pannu has filed as a Republican U.S. Senate candidate, but the VTGOP hopes to find a better-known figure.

"People are talking about opposing Bernie," Moulton said. "No one for Welch. Someone is thinking about attorney general. A few people are looking at lieutenant governor, but no one we can share."

Democrats or Progressive/Democrats hold all five non-gubernatorial statewide seats: lieutenant governor, attorney general, treasurer, secretary of state and auditor. Republicans believe Lt. Gov. David Zuckerman is the most beatable of the lot. But so far, they're lacking a candidate. Some well-known Republicans are talking big but have yet to commit.

"I may be a candidate for office in 2018, with a public announcement next week," wrote Scott Milne in an email. Milne nearly defeated incumbent governor Peter Shumlin in 2014; he was trounced in 2016 by Sen. Patrick Leahy (D-Vt.) but still seems to have the political itch.

And then there's Rep. Kurt Wright (R-Burlington), a former Burlington mayoral candidate who now heads the city council. "I think I will be running for something in the fall," he said. "Some are asking me to run for lieutenant governor or state Senate from Chittenden County." Or he may just run for reelection. It's quite possible the GOP will come up empty in the lite-gov race, which would be an embarrassment.

But the ultimate embarrassment, and the ultimate setback for the VTGOP, would be losing their power to sustain vetoes. If that happens, even if Scott is reelected, his second term could turn into one long battle with emboldened legislative opposition.

Dr. Dan Freilich, the feisty Democratic challenger to Congressman Welch, is seeking to capitalize on recent reports that put the incumbent in a bad light. A May 13 story in the Washington Post identified several members of Congress who faced outsider challenges based on campaign finance issues — specifically, those who benefited financially from drug makers and sponsored a bill that, some argue, makes it more difficult for the feds to block trafficking in prescription opioids.

The article named Welch as accepting $79,000 in campaign contributions from drug makers and trading more than half a million dollars' worth of stock in drugstore chain Rite Aid.

"My priority is to get money out of politics as much as I can," Freilich said. "I was aware of Welch's corporate donations, but I wasn't aware of his personal enrichment."

Welch said he bought the Rite Aid shares before he was elected to Congress, and sold his interest in 2016. But he held them for nine years in Congress when he was playing a significant role in health care policy.

"He's either disingenuous or isn't even aware," asserted Freilich. "Even if there's no quid pro quo, there is the appearance of impropriety."

Welch acknowledged that appearances are a problem and argued that he has taken steps to avoid such entanglements, including shifting his portfolio to mutual funds that include numerous stocks.

"Ninety-four percent of what I own is in managed funds" rather than individual corporate stocks, he said, adding that he has told his investment adviser not to buy pharma stocks.

Welch's latest financial disclosure, for 2016, backs up his assertion. He owns diverse holdings across a broad spectrum of market sectors. And he owns a lot; his 2016 disclosure lists 139 separate funds and stocks.

The bottom line: Welch is a multimillionaire. His financial disclosure lists each investment within a wide range of value — say, between $1,001 and $15,000. If you take the low end of each holding, you get a healthy $2.7 million. The maximum amounts add up to $7.16 million.

Has Welch done enough? Mutual funds remove the connection to an individual company, but if he buys a Pharma sector fund, he still has an interest in the well-being of the industry — which is often at odds with health care reform efforts. A multimillionaire with extensive investments can be a champion of progressive ideas. But still, there are appearances of conflict and subtle ways that substantial wealth changes one's point of view.